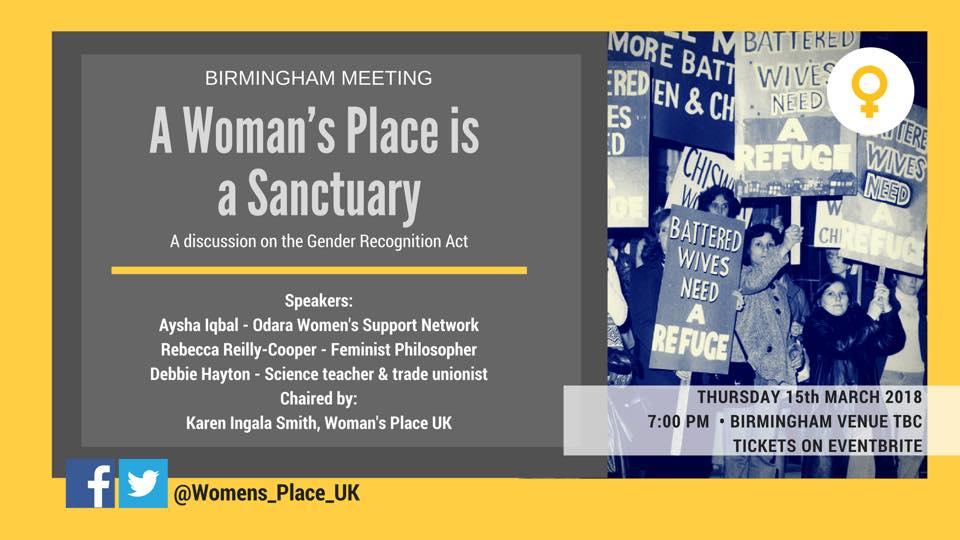 Birmingham (venue to be announced)

A Woman’s Place is a Sanctuary

Debbie Hayton.  Science teacher, transwoman and trade unionist.  Contributor of important articles to the Times and the Morning Star on the subject of self-identification.

Aysha Iqbal.  Founder of Odara, the fastest growing Women’s Network in the West Midlands. Her work bringing women together has been featured in the recent BBC Documentary Crossing Birmingham’s Invisible Borders

Chaired by Karen Ingala Smith, Woman’s Place UK. CEO of a women’s sector NGO with 27 years experience of providing specialist services to women. Founder of Counting Dead Women (recording and commemorating all UK women killed by men or where a man is the prinicple suspect/perpetrator).

In July the government announced a consultation on their proposal to ‘demedicalise’ the process of changing gender, so that people can self-identify as the gender they choose, without any need for a medical diagnosis of gender dysphoria.
But what exactly is ‘gender’, and what will be the impact of self-identification on women and on women’s rights?