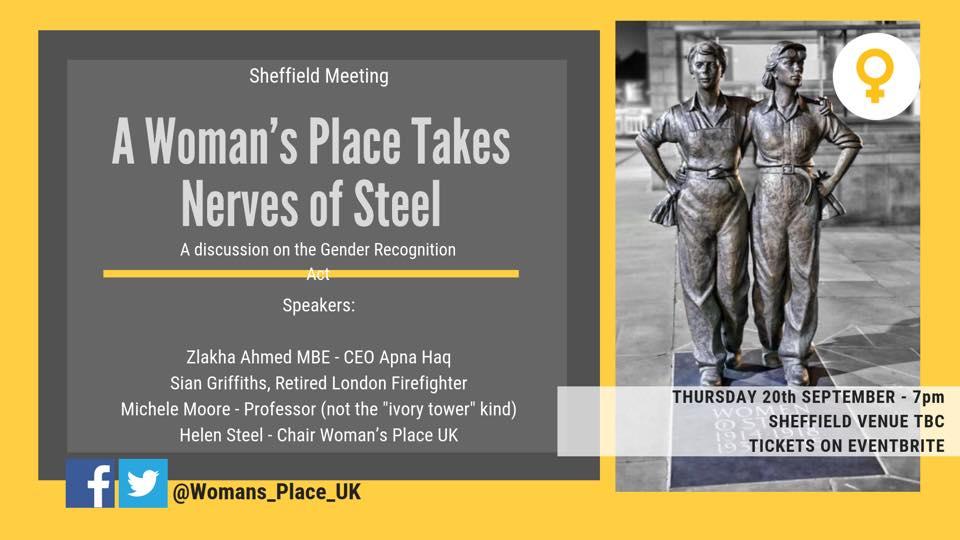 A Woman’s Place takes Nerves of Steel (This event is SOLD OUT. The waitlist has been enabled. We will release tickets as and when they become available).

Zlakha Ahmed MBE – Since 2011 Zlakha has worked tirelessly to highlight that girls were being sexually exploited in her home town of Rotherham from within the BME minority communities. She is the CEO of the womens rights organisation Apna Haq. Being Muslim herself, and with over  85% of the service users at Apna Haq also being Muslim women, she speaks out against increasing levels of racism/Islamaphobia directed at Muslim women as-well as championing the right of Muslim women to have their own spaces. As a member of the Domestic Violence Working Group for the National Institute for Health and Care Excellence, she contributed towards their guidance aimed to help identify, prevent and reduce domestic violence and abuse, in health and social care.

Sian Griffiths – ‘I was a single parent when I was 24 and needed a full time job. I was a part time playgroup supervisor in a community centre in North Ken, London where I saw a poster for the London Fire Brigade, advertising firefighter vacancies. I applied and in 1985 I became one of the 11 women firefighters amongst 6000 men. I thought I’d last 5 minutes but in fact did 30 years service and had another child in 1996, whilst as a firefighter, with my husband Tim, also a firefighter. So I’m happily retired 3 years and now a proud grandmother.
It was instinctive to fight against unfairness, I was an active member of the Fire Brigades Union and I have always proudly called myself a feminist. https://strongerunions.org/2015/06/01/celebrating-30-years-of-women-in-the-fire-service/

Michele Moore – Professor Michele is an expert in Inclusive Education and Disability Studies. She leads human rights projects across the world to support children, their families and those who work with them. She is the Co-Editor of the ground-breaking book Transgender Children and Young People, Born in Your Own Body from Cambridge Scholars. Michele will be discussing ideas from the book – the implications of self-declaration of gender for children and young people, including disabled children

Helen Steel – trade unionist, social justice and environmental activist, McLibel defendent and campaigner for justice against state spying and insitutionally sexist abuse by the police.  Attacked at the Anarchist Bookfair for defending the right of women to distribute leaflets voicing concern about the Tory government’s review of the Gender Recognition Act.

In July 2018 the government opened a public consultation on their proposal to ‘demedicalise’ the process of changing gender, so that people can self-identify as the gender they choose, without any need for a medical diagnosis of gender dysphoria.

But what exactly is ‘gender’, and what will be the impact of self-identification on women and on women’s rights and legal protections?

ID is required for each person attending and must match the name on the ticket. For this reason, only one ticket can be booked at a time – sorry for the inconvenience.

There is no minimum age. Babes in arms are encouraged. Please consider the suitablity of the event if bringing children. No unaccompanied children.

Tickets bought may be refunded up to seven days before the event. Organisers reserve the right to refund and cancel any tickets ordered. Venue details are confidential to ticket-holders.  A collection will also be made to cover costs of the meeting.