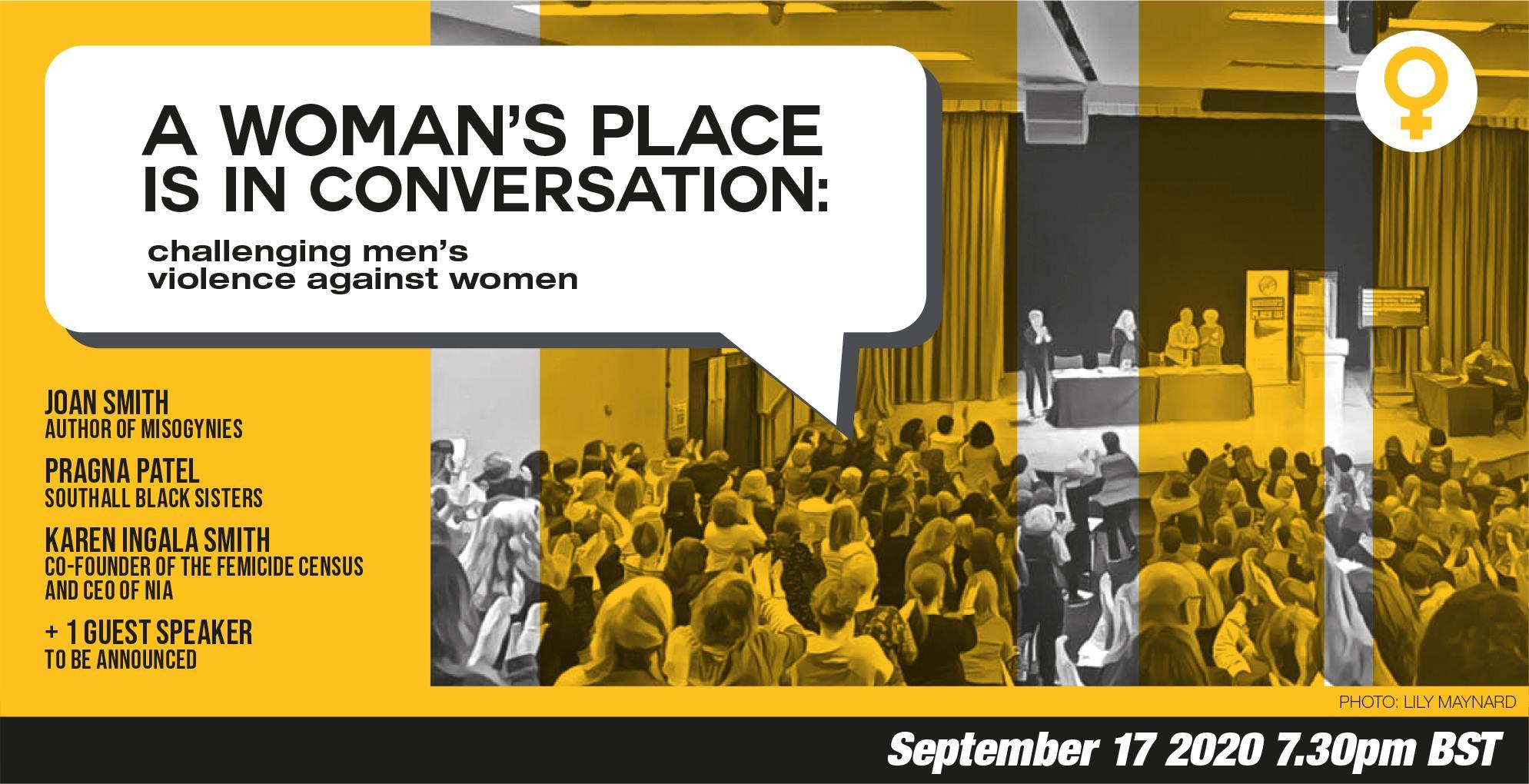 Woman’s Place UK is honoured to host an online conversation between experts in the field, about challenging men’s violence against women.

Registered attendees will be able to submit their questions for the panel in advance of the event and also to pose questions and seek further information during the live online discussion.

Joan Smith, author of Misogynies, is an English journalist, novelist, and human rights activist, who is a former chair of the Writers in Prison committee in the English section of International PEN. She has been Chair of the Mayor of London’s Violence Against Women & Girls Board since 2013. Her latest book, Home Grown: How Domestic Violence Turns Men Into Terrorists, has been shortlisted for the Neave Memorial Prize 2020.

Pragna Patel is a founding member of Southall Black Sisters (SBS) advocacy and campaigning centre. She worked as a co-ordinator and senior case worker for SBS from 1982 to 1993 when she left to train and practice as a solicitor. In 2009 she returned to SBS as its Director. She has been centrally involved in some of SBS’ most important cases and campaigns around domestic violence, immigration and religious fundamentalism. She has also written extensively on race, gender and religion.

Karen Ingala Smith is CEO of nia, a women’s sector NGO. She has 30 years experience of providing specialist services to women. She is also the co-founder and director of the Femicide Census/ Counting Dead Women (recording and commemorating all UK women killed by men or where a man is the principal suspect/perpetrator).

Afsana Lachaux is a women’s rights activist and political commentator, advocating on issues relating to women and sexual violence, freedom of expression and legal justice. She is the 2019 joint winner of the Emma Humphreys Memorial Prize. Afsana has been fighting an eight year multijurisdictional battle to be reunited with her son Louis, who was removed by a sharia divorce court when he was just three years old. Afsana has successfully campaigned for the Foreign and Commonwealth office to change their travel advice warning women about the dangers of UAE sharia law. In 2017, Afsana won a landmark victory for women’s rights in France. The French Supreme Court found the UAE divorce to be ‘manifestly discriminatory’ and a breach of equality laws and French public policy. She is currently running a crowdfunding campaign to raise awareness of her British High Court case in which the judge rejected the French ruling and endorsed the UAE discriminatory decision to have her child removed. She has been ordered to pay £94,000 towards her ex husband’s legal costs or face bankruptcy.

Tickets for this event are free. Due to Covid-19, we have had no physical meetings since our conference in February 2020, and we are unlikely to do so for the time being. The costs of running our campaign have therefore reduced. We are very grateful for donations, but also want to ensure that money goes where it is most needed right now. If you are would like to help women most in need, we would encourage you to make a donation to these groups: