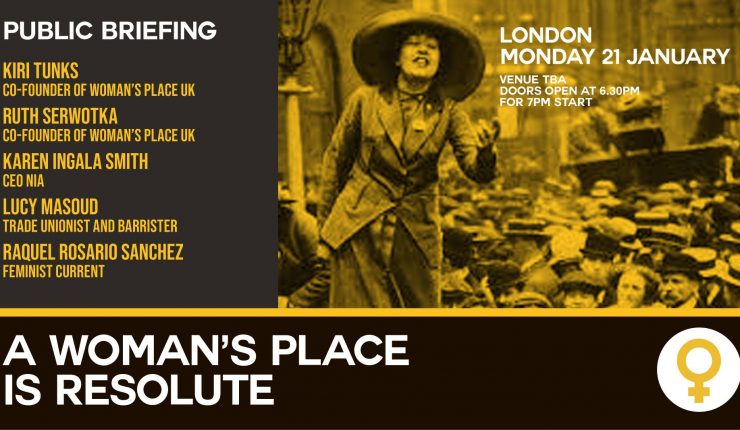 This is the speech that Philipa Harvey gave at the London meeting, A Woman’s Place is Resolute. She spoke on our fifth demand in place of Raquel Rosario Sanchez.

Rigorous collection and analysis of sex-based data and high-quality research must be central to the development of any services, policies or actions which address women’s needs or which challenge sex discrimination and inequality.

Raquel was unable to get to the meeting at the last minute but sent this statement of support.

I would like to begin by saying how sorry I am to miss the opportunity to hear Raquel speak.

I am, however, very pleased to be here this evening and have the opportunity to share my thoughts and reflections with you in particular about this final point or resolution:

“Rigorous collection and analysis of sex-based data and high-quality research must be central to the development of any services, policies or actions which address women’s needs or which challenge sex discrimination and inequality.”

I am going to concentrate on the data aspect because of the roles I have in my day to day life.

I am a teacher trade unionist.

In both these roles data and indeed research is vital.

It is the power behind information.

All over the world for everyone.

Clearly this includes ‘woman’ – a distinct sex class, with distinct needs, weaving through all aspects of life.

We need to unpick those and not erase them or confuse them by redefining or blurring what it means to be a woman.

So why have WPUK specifically identified the Rigorous collection and analysis of sex-based data as one of the five resolutions for 2019 and why indeed was it one of the original campaigning principles?

Well, when we campaign we use facts and facts are informed by data.

We look at what the impact of the changes to these facts will be if there is a change to legislation, conditions, funding of any kind through policy etc.

So we need accurate reliable facts and data.

These must be robust and open to scrutiny.

We are looking at facts linked to:

I could go on…

Let’s look at some of those in more detail:

In order to have accurate information data and evidence to combat the gender pay gap you need to collect data related to those who have always worked as women; people who have never benefitted from being in work as men with the inherent benefits that men get in the work place…

In fact people who have not benefitted from being educated as males – with the expectations enabling access to particular subjects that are deeply embedded in our society.

This of course relates to the deeply damaging and discriminatory impact of gender stereotyping that plays such a negative role in our society. Let alone the overt sexist attitudes that exist in many work places.

And then, of course, there are the sexist behaviours and attitudes that lead to discrimination in relation to maternity issues.

Data will be affected and become invalid if it is not a true reflection of the facts.

Therefore there could be an impact on the ‘gap’ and it could therefore hide the true gender pay gap.

It is commonly known as a gender pay gap but is more accurate to describe it as a sex pay gap.

There is already evidence that there are diminishing levels of participation in equalities monitoring because women are withdrawing from a process that they no longer value.

There are also issues related to campaigning linked to biologically defined stages in life such as pregnancy and menopause.

We are women who may be going through a biological stage in our lives.

The data collected to campaign around these issues must be true.

It is also vital that as a society we are made aware of the extent of sexual harassment and violence against women and girls.

We must tackle this and in order to do this we need the facts.

This means we need reliable and accurate data.

This means that it must reflect the sex based nature of this harassment and abuse.

There is already a woeful lack of services for all victims of sexual violence. We must have the most robust facts and data to secure the much needed resources for victims of abuse.

So, what we are seeing is those very facts that we rely on to campaign being skewed already by lack of participation and a lack of clarity with definitions that are not clear. And there is a lack of trust in that data that is likely to result from the monitoring and collection.

UK census authorities are beginning to prepare for the 2021 Census.

The Scottish Government has prepared legislation to amend the Census Act 1920 in order to enable questions on sexual orientation and gender identity on a voluntary basis. The bill is currently passing through the Scottish Parliament and WPUK submitted written evidence to the Committee responsible for scrutinising the legislation*.

The Scottish census authority is also considering adding a third option to the ‘sex’ question so that respondents would be able to choose ‘male’, ‘female’ or ‘other’.

However, the ONS in England and Wales, has ruled this out due to concerns about data quality and the question will remain a binary one (i.e. ‘male’ or ‘female’).

“The main point that she wanted to make before saying anything else is that there is clearly no disagreement at all about the value of gathering more data on the population who identify as trans. The gathering of such data is immensely valuable, and the census is a good place to do that.”

It is important that the census continues to capture data on sex, as a protected characteristic, in terms that are consistent with the Equality Act 2010.

The ability to compare data over time is vital.

That would definitely create issues for quality monitoring and data use.

As we know, if you alter the data information in any type of equation or planning it will change the dynamics and the balance and  it will alter the outcomes

The collection on sex in the census matters:

If you change the parameters of a data base the database loses its worth.

So I return to my role as a trade unionist and a campaigner.

In the response from the TUC to the GRA consultation an additional point was made around the issue of data because we recognised the importance of considering any changes to law on changes to data collection.

And the submission recognised:

Therefore the rigorous collection and analysis of sex-based data and high-quality research must remain central in a women’s rights campaign.