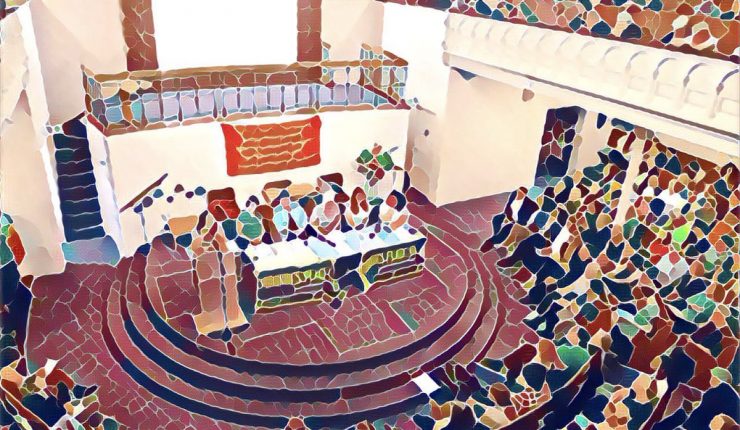 Meghan Murphy is a freelance writer and journalist. She has been podcasting and writing about feminism since 2010, is the founder and editor Feminist Current, Canada’s leading feminist website and has published work in numerous national and international publications.

This is the text of the speech she gave at the 22nd meeting of Woman’s Place UK.

I’ve been thinking a lot about authenticity lately. We’re currently living in a culture wherein authenticity has been traded in for fakery. We support and reward virtue signalling and punish those who are real, those who tell the truth, those with integrity, those who insist on making political arguments based on critical thinking and what is right, rational, and ethical, instead of based on what is politically correct or popular.

I have a rather overzealous commitment to authenticity, which I think has played a sizable role in my insistence on pushing back against gender identity ideology and legislation. I know I have friends, or acquaintances, or friends of friends, or random internet followers with self righteous opinions who think maybe I should just back off of this. Or who claim I’m being ‘mean’ or unempathetic, because I continue to operate in reality rather than the fantasy land we’re told is the new normal, wherein black is white, up is down, and men are women.

But I see no empathy for women and girls on the part of trans activists, that is to say, those pushing gender identity ideology and legislation. What I see is bullying, threats, ostracization, and a misogynist backlash against the feminist movement and much of the work it’s accomplished over years.

I see no empathy for women who are now being forced to compete against male athletes in sport, essentially rendering women’s sport nonexistant, as they can no longer compete on fair ground, if forced to compete against men. I see no empathy for the female athletes speaking out against this reprehensible trend —  instead they’re being smeared and threatened. I see no empathy for the lesbians being bullied right out of their own events and communities, as the LGBTQxyz+++ whatever movement does nothing to support them, and in fact seems instead to support the men pushing them around and hurling verbal abuse at them, simply for asserting that lesbians are females who are attracted to other females, not heterosexual men interested in playing around with lipstick.

We held an event in Vancouver earlier this month, addressing the issue of gender identity and kids, and our venue — the Croatian Cultural Centre — received so many threats they had to file a police report, hire their own security, and bring in the Vancouver Police Department to keep protesters off the property. They, for once, didn’t blame us — women, feminists — for the threats of violence sent their way, and rather asked, with disbelief, how it was us the trans activists were accusing of being ‘hateful’, while simultaneously verbally abusing and threatening violence against the venue’s staff.

Somewhere between 150 and 200 protesters showed up, and stood outside with signs saying things like, “Support trans youth”, “Love and Solidarity”, “Love trans kids”, “be careful who you hate, it might be someone you love” and “love wins.”

All this branding around “love” has been incredibly successful, of course. We — women fighting for women’s rights, people fighting for the truth, those of us who insist on acknowledging that biology is real, that females and males are real things, and that, no, there is no such thing as a “female penis” —have been painted as hateful, intolerant, and bigoted, despite the fact that we are the only ones engaging (or trying to engage in) respectful, civil, rational debate and discussion, and being shut down over and over again.

Despite the fact that WE are the ones concerned about male violence against women and how gender identity ideology and legislation will hurt women, as well as kids, who are now being sent down a path towards hormones and surgery that will destroy their bodies permanently, simply because they don’t conform to sexist gender stereotypes, it is trans activists who have positioned themselves as caring and politically correct, and us as cruel and intolerant.

As I was leaving the venue after that event, the stragglers screamed at me that I had blood on my hands. Which of course I do not, and which, of course, is incredibly ironic considering how many times I’ve been told I should be murdered on account of my belief that you can’t change sex, and that it is not possible to be ‘born in the wrong body.’

I see no empathy in trans activism for the girls who will lose scholarships and opportunities to boys who can easily beat them in athletic competitions.

I see no empathy for women and girls who don’t feel comfortable with naked men in their change rooms at the pool. I see no empathy for youth being put on hormones that will have a lasting impact on them, including permanent sterilization, all to accommodate adults who don’t want to see trans ideology questioned under any circumstances.

I see no empathy for the women and their children who will have nowhere to turn if their local transition house is defunded on account of a women-only policy.

I see no empathy for Kristi Hanna, a Toronto woman and survivor of sexual assault, who had leave her room at Palmerston house, a shelter for recovering addicts, because she was made to share a room with a man, and did not feel safe.

I see no empathy for the 14 female estheticians who were asked to give a male a brazilian bikini wax, then dragged to court when they declined, saying they only offered the service to women.

I see no empathy for the girls allegedly predated on by this man, who is being protected by our very liberal, very progressive society that’s choosing to put male feelings and desires above all else, under the guise of ‘inclusion’, and thanks to trans activism.

Trans activism says women may not define their own bodies as female. That we may not have our own rights, services, and spaces, that ‘exclude’ men. It says gender stereotypes are real and innate, but the female body is a social construction. It says that ‘woman’ is based only on adherence to or an affinity towards femininity, something feminism has fought against for years.

So much of what women fought for over the past century is being rolled back, and progressives are insisting we all shut up and take it, because it’s ‘nice’, and of course, women must always be ‘nice’, even if it means putting our lives, autonomy, safety, opinions, and rights aside.

NOTHING about the trans movement is progressive and nothing about it is feminist.

I brought up authenticity earlier on, partly because I am sick to death of this social media based culture wherein we put forth personas we believe our audience will like, modeling perfect faces, lives, and thoughts, which I find incredibly boring and depressing, but also because I see this devaluing of authenticity as having an incredibly destructive impact on political discourse, and certainly it’s manifested itself powerfully in the trans movement.

I don’t believe that, aside from a few exceptionally delusional or troubled people, a majority of the population believes it’s possible to change sex. I don’t believe that all these so called progressives look at a man we call him ‘she’, and believe he is literally a woman. I don’t believe all these people claiming ‘love wins’ and insisting women be more ‘empathetic’ as they give up all their rights and spaces, while these activists spout vile, hateful insults and threats at us, are really very loving at all.

I think people are not telling the truth. I think they are repeating mantras and going along with ideas and policies in order to appease their Facebook friends. I think they value social status a lot, and are willing to give up ethics and truth in order to be liked. And I think it’s pathetic. I think that these people are throwing women under the bus and even selling themselves out in the process, knowing that they’re spouting lies for virtual cookies and using us all to fake politics.

And I refuse to be used as some kind of stepping stool for empty headed, cowardly hipsters — these extremely privileged people who have fetishized oppression, but have no idea what marginalized groups actually face and deal with on a daily basis, because certainly it’s not ‘misgendering’ that is keeping people poor and vulnerable — who can’t be bothered to read, listen, or think before announcing, boldly, that women with actual politics, who actually understand history, and who are  bold enough to take a stand against actual bigotry and oppression should be silenced, punched, or even killed.

The wrong side of history is an embarrassing place to be.

But unfortunately I worry that, by the time these people realize how much damage they’ve caused by going along with such a destructive trend, it will be too late. What does give me hope is all of you. This massive and growing movement of people standing up and saying ‘no’, we won’t take this silently and sitting down. This groundswell of people insisting on telling the truth, despite the fact that we lose friends, jobs, social status, and sometimes safety, for doing so.

And the more we keep doing it, the more will join us.

Watch the film of Meghan speaking at #WPUKLondon

Thanks to Lily Maynard for the pictures.