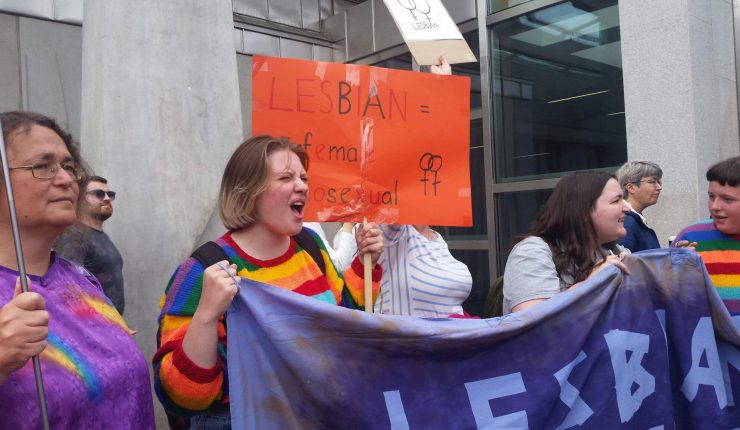 In this adapted version of a twitter thread, Jackie Mearns gives this account of her day at Edinburgh Pride.

So. My personal account of my day at @PrideEdinburgh.

I met up with some lesbians who wanted to make sure that we had #LesbianVisibility at this year’s Pride. We had banners and placards, and some were wearing t-shirts that proudly proclaimed that ‘we are LESBIANS’.

There was maybe about 12 or 13 of us, ages ranging from early 20s to mid 60s. We gathered together a short distance from the rally point, and the first thing that struck me was the undercurrent of nervousness that prevailed instead of a sense of joy and celebration.

Why would Lesbians feel nervous about attending Pride?

Why SHOULD Lesbians have any fear about attending Pride at all?

Isn’t Pride about us as much as the rest of the alphabet soup?

Why should the simple act of proclaiming who we are be associated with dread?

Because, dear reader, LESBIANS ARE NO LONGER WELCOME AT PRIDE. The fact that we are same sex attracted, not same “gender” (and thus naturally exclude men in our choice of partner however they “identify”) makes us pariahs. As long as we stay silent, we can slip under the radar.

But proudly and unapologetically claim our space on a day that is meant to be about celebrating our love for each other as females and we become targets of hate.

At least that’s how it felt waiting for the march to start.

We arrived at the rallying point outside the Scottish Parliament and peacefully spread out our banners and held up our placards: ‘Lesbian Visibility’, ‘Lesbian, Not Queer’, ‘Transactivism Erases Lesbians’.

We wanted visibility. And Pride still has its roots in protest, no?

Certainly, that was what MSP Patrick Harvie (who I will come back to in a moment) reminded the crowds. We held our banners and sang some songs. Some tourist types took our photos. Some young Lesbians came up to us and said they wished they had known we were marching and bemoaned the lack of Lesbian spaces and community in Scotland. They seemed relieved to see they were not alone, with their hand-made purple and black Labrys placard, quietly proclaiming their Lesbian existence, transparently relieved to have support and solidarity.

I’m glad I’m not young any more, and have to start from a place where there are no male free spaces, even for Lesbians. I was so delighted to see them and thanked them for their courage.

But. WHY SHOULD IT TAKE COURAGE FOR LESBIANS TO ATTEND PRIDE IN THE FIRST PLACE???

Contrary to some accounts I have seen, we were not booed at the rally. There was an act of physical aggression when an angry young person grabbed a placard I was holding and tried to rip it up, shouting “TERF” in my face, but this was quickly handled by stewards and police liaison and I’ve honestly faced down worse violence from violent men than a ripped placard.

Kind of goes with the female terroritory, sad to say.

But what did chill me and did stir some actual fear for how I and the others might fare on Pride was the speeches given by MSPs from the top of the open top bus. In particular the words of Patrick Harvie, Green MSP, where he felt the need to apologise for the democratic workings of Parliament, and the decision taken this week to put the brakes on GRA reform until the full due consideration and further deliberation by a broad range of groups affected by these reforms and, importantly, the conflation of sex and gender that has infested our policy making.

He said, “I am sorry that this parliament very recently was used as a platform for transphobic hatred and bigotry”.

This whipped the crowd up onto a bit of a frenzy, since they had already been primed by the previous speeches that whilst the “theme” of this year’s Pride is “Be Yourself”, the main focus (as it’s been for several years) isn’t about the right to love and express that love without prejudice, it is about “trans rights” front and centre.

I can’t remember the last time Lesbians were ever front and centre in anything LGBTQI+++ related – can you?

So, the need for Lesbians taking space IN PRIDE is pressing. For we are being erased.

I felt Patrick Harvie’s speech inflamed an already dangerous situation for Lesbians on Pride. It did make me fearful, since immediately after, some people started shouting about getting the ‘TERFs’ out – it was obvious they meant us. We had already been blocked in by some very tall people wearing ‘Trans’ and ‘Non-Binary’ flags draped over their shoulders – quite literally and intentionally making us and our ‘Lesbian Visibility’ banners invisible.

Thanks to the spittle infused rhetoric espoused by Patrick Harvie MSP, our situation went from hostile to dangerous. I thought politicians had some standards in public life to stick to. Certainly, I don’t expect them to inflame the flames and put people (Lesbians) in danger of mob attack.

I was dismayed to find out later that my sisters who joined the march were harassed by marchers behind them, had bells rung and whistles painfully blown in their ears and even had a missile thrown at them in the shape of a juice bottle, that fortunately missed them but unfortunately hit a tourist photographing the parade.

They left the march of their own volition; unwilling to make their selves a target for hate any longer and fearing that the bells and whistles might turn into blows or worse.

It was obvious this would happen. The marchers had been well and truly whipped up into a ‘righteous’ anger by our MSPs and others who spoke from that open-top bus at the pre march rally.

The rally where Lesbians were intentionally blocked-in and made invisible.

Where women were told they were bigots for standing up for Female Rights and expecting our politicians to do the same;

Where it was made crystal clear to us that LESBIANS ARE NOT ONLY NO LONGER WELCOME BUT ARE NO LONGER SAFE AT PRIDE.