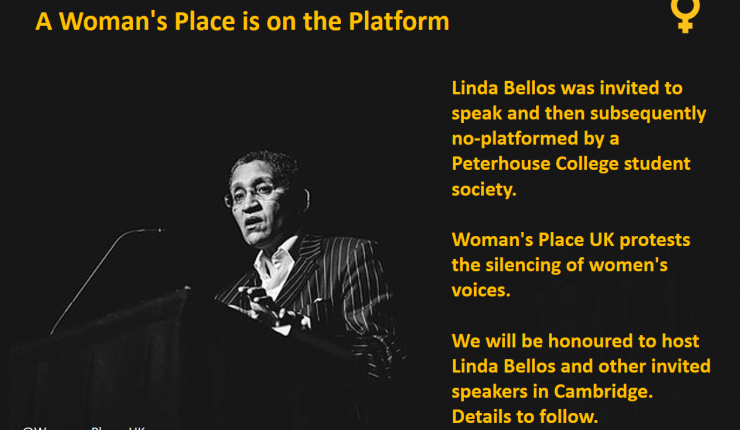 This article was originally published on the Socialist Feminist Network website on 28th November 2017.

When I heard that Linda Bellos had been ‘uninvited’ by a student society of a Cambridge college at which she had been due to speak, I knew I couldn’t let that stand.  I asked her if she would speak at a Woman’s Place UK event, extending the invitation to speak in Cambridge that she had been denied. I was honoured she agreed.

We announced our intention to hold a meeting, and set about deciding a date and a securing a venue.

In the weeks leading up to the event, we heard of more women being shunned, intimidated, smeared and silenced for their views about gender. Helen Steel was threatened at the Anarchist Bookfair  – we asked her to speak on our platform. Anne Ruzylo was subjected to an orchestrated campaign against her, prompting the entire executive committee of her Constituency Labour Party to resign in solidarity  – we asked her to speak on her platform. Just days before the meeting, Heather Brunskell-Evans was placed under investigation by the Women’s Equality Party  – she agreed to join our platform.

However, as soon as we made the tickets available, the attempt to shut down the meeting started in earnest. As the venue hadn’t been advertised it could not be put under pressure. Instead there was an organised campaign to book up all the tickets in order to quickly ‘sell out’ the event, and hence prevent those who genuinely wanted to hear our speakers from attending.

Had we stuck to our original capacity, we would have been ‘sold out’ in less than a day, and our speakers would have addressed an almost empty hall. Our attempt to have women’s voices heard would have been stillborn.

Once we realised this was an organised campaign, we acted as best we could to protect the viability of the meeting. Each time we had a flurry of seemingly fake bookings, we increased the number of available tickets to account for them. We made our very best efforts to attempt to distinguish between bookings made by those trying to disrupt the meeting and those by people who genuinely wanted to attend. It was easy to discount bookings that were abusive, silly or hostile.

Fake bookings made in the name of well-known feminists (sometimes misspelled) but with unlikely email addresses were also easy to discount.

If that’s not creepy enough fake bookings were also made in the name of women without a public profile, using false email addresses.   The evening before the meeting our event site received a message from a Facebook user hoping that ISIS would blow us up.   It wasn’t a direct threat – we assumed this man wasn’t connected with ISIS – but it did confirm that some feel violence against women wishing to speak on gender is justified.

We were understandably anxious about releasing tickets and venue details to hostile activists in well-networked communities that announced their intention to shut down meetings (and boasted about their ability to do so). Our anxiety was justified. When the details were released, the venue was called within minutes and in an effort to have them withdraw their hospitality. It is reasonable to assume that had we released venue details more widely and earlier, the venue would have received many more and persistent demands not to host us. We didn’t wish to bring this trouble to their door. We are grateful that they did not succumb to the pressure they did receive.

In an effort to discredit the entire event, much has been made of a assertion by a single audience member that the transgender lobby is an alt-right movement. I have been to countless left meetings in my decades in politics. In almost all of them at least one man of the left has stood up and made a demagogic contribution, complete with hyperbolic over-reaching. Indeed, there are men on the left who have made whole careers out of such speechifying. We tend to gloss over their deficiencies (‘oh, he’s always like that’) and are able to focus on the big picture. But as Helen Steel pointed out in her powerful speech – we hold women to higher standards than we hold men, and demand perfect speech from women in order to allow them to speak at all.  Her talk and those of Linda Bellos and Anne Ruzylo will be published in due course so that viewers can hear directly with what they have to say.

Anyone who feels that this meeting was less open than it could have been know to whom they must address their complaints: the lobby which has decided women have no legitimate right to speak on matters which affect our lives and use a catalogue of underhand tactics to shut our meetings down.