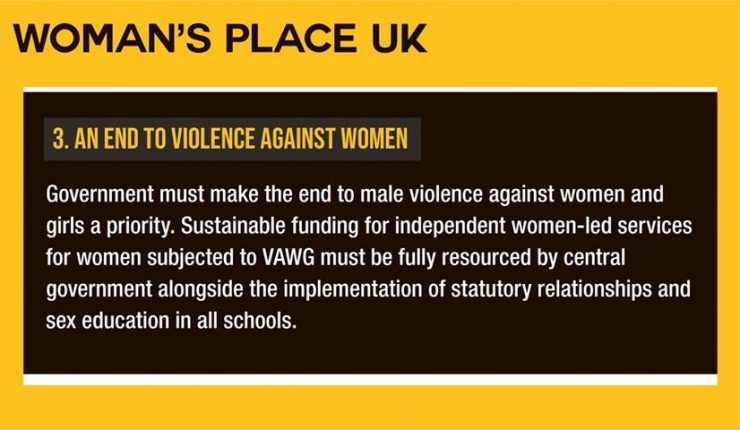 Charlotte Delaney is a writer, a mother and a feminist.

Some time ago a close friend’s 18-year-old daughter called her mother to tentatively explain why, in her daughter’s own exquisite words, she had been ‘acting like a dick’ over the previous year.

Unable to contain ourselves, her mother proceeded to ask her a series of questions:

“Have you had an abortion?”

“Are you taking class A drugs?”

“Are you having an affair with a married man?”

“Have you been captured on film doing something dodgy and now you’re being blackmailed?”

It was none of the above.

What on earth had she been up to, we wondered.

Her confession was quite straight-forward: the young man she had recently split up from had been hitting her. He had also been telling her what a worthless wretch of a young woman she was, that she was nothing without him, that nobody else would ever want her. That who she was made him who he was. And then, of course, he would be appalled at his behaviour, and show enough contrition and charm to make her feel awful for ever doubting him. Which kind of means, she had to doubt herself, because somebody must take the rap for the violence. In this way, she became that somebody. The responsibility for his actions lay firmly across her shoulders. Or so he would have had her believe.

Me and her mother, following guidelines from the Women’s Aid website,  listened, acknowledged and supported her. We didn’t insist she never speak to him again and told her that we thought she was pretty amazing for having the courage to tell us at all. I must confess we may have veered away from those guidelines when we offered to run him over, but other than that I think we did okay.

Through her tears she said: “He put things in my head. Ideas about myself.”

In my experience, the men who hurt me have been the men who made me feel loved when I was most isolated from the pack, the men with whom I have shared my deepest insecurities and secrets, the men who could talk me into anything. And then, discreetly at first, that information was used against me to both undermine any remaining self-confidence and justify the physical violence that was to come. Whatever stick they were using to beat me with – metaphorical or otherwise – was always dipped in a smidgen of the truths I had shared. This is how you make shit stick.

“Let’s face it, you’ve been a bit of a slapper, nobody else is going to love/want/respect, you.”

“You’re just so bloody gobby, why can’t you learn to keep your mouth shut?”

Like my friend’s daughter, being on the receiving end of the abuse became my dirty secret, my shame, my fault. Even when I took ‘him’ to court – having been rescued by the police when I was under siege aged 18 – I didn’t tell my mum. I was too embarrassed. I didn’t want to be one of ‘those’ women who gets herself punched or kicked or slapped – the women who ‘ask for it’. Or the women who are always moaning about their man and should just leave them. I didn’t want to be one of them, but I was, and I hated myself for it. So, I learned how to be flippant about the pains of the past “Oh yeah, I’ve had a few right-handers from blokes, but ya know….’

I now realise that the fat lip my friend’s daughter was sporting a few months ago, is a close relation to the bruises I was sporting across my breasts when I was the same age. Nearly 40 years ago.

The UN has described the rise of domestic violence during lockdown as a “shadow pandemic” . Fourteen women and two children were murdered during the first three weeks of lockdown in Great Britain, alone. How long were these women and children walking on eggshells, or broken glass, before the final death blows were struck?  In some countries, a code word has been adopted to be used in supermarkets or pharmacies which signals a need for immediate and urgent protection from an abuser. Callers to helplines in Chicago were torn between the threat at home and the threat of the virus. They were asking for advice: how to keep him calm, how to communicate safe words to their children, how to survive.

Where is the outrage? Certainly not in the media, where these murders are treated as an inevitable by-product of Coronavirus – like a bad cough or the loss of one’s sense of smell. Headlines artfully conjure up a picture of happily married couples for whom lockdown was just too much to bear, that in some way this is a tragedy for all concerned. Including the murderer.

Where are the headlines that scream: “Another woman murdered by a violent man” rather than jilted lovers driven to extreme measures because of a broken heart?  If only the women had been kinder, quieter, smaller, more invisible. And yes, guidelines have been introduced to address the sloppy woman-hating headlines of yore, but they are just guidelines and, by what I’ve seen during C-19, the media is still bending over backwards to avoid talking about the real problem. And in case you missed it, I’m talking about male violence against women.

As far as I’m concerned, this is not a grey area. The figures speak for themselves: over 1.5 million women were victims of domestic abuse in 2019. I would hope we are all appalled and horrified by that figure. But it is women who are paying attention to the numbers, organising to provide robust specialist legal support for women and girls affected by male violence  and busting a gut to rescue and care for those women and children who have to run for their lives. I wouldn’t expect it to be any other way, it’s what we’ve always done, and not just for the women we know and love.

But, fellas please, you could show some interest. Aren’t you concerned about this epidemic of violence? Don’t you want to understand why so many men hurt women, for the sake of the women in your lives, on your bus, working by your side, teaching your kids, performing your surgery? How about asking the men in your lives what their strategies are for avoiding sexual assault – and then ask the women in your lives the same question (a grateful nod to Jackson Katz for that exercise). Maybe start a conversation about it so we (that’s us women) don’t have to tolerate the eye-rolling and exasperation when we try to – “here she goes again”.  I know not all men hurt women and not all women have been hurt by men, but we are on a  hiding to nothing if we’re waiting for the misogynists to get to the bottom of this global horror story. It wouldn’t be in their interest, would it? If any other marginalised group were being murdered and violated at the same rate as women and girls, would there continue to be such a deafening silence? Would each murder, each beating, each rape, each woman controlled and trapped in a prison not of her making, be treated as an isolated incident?

Females learn early on to develop a sixth sense where the potential dangers of men are concerned. Whether it’s the 14-year- old girl who changes her run route, because her favourite one went past the beer garden and some of those men just couldn’t keep their mouths shut. Or the woman who spends money she can ill afford on a taxi because making her way home at night isn’t worth the risk. Or stifling a snigger because if he thinks you’re laughing at him it could turn nasty.

I can’t help thinking that if any other marginalised group were getting beat up, wiped out and terrorised at the rate women are, those crimes would be considered hate crimes. And treated accordingly.