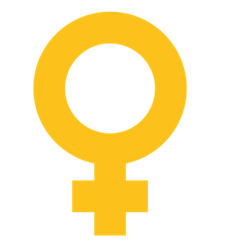 Michaela Clare Addison is an advocate for young women & girls who have been subjected to sexual violence. She has recently been awarded an MA from CWASU (London Metropolitan University) in women and child abuse studies with her dissertation focusing on the failures to support young women and girls affected by criminal gangs.

The debate around sex and gender largely overlooks the voices of young women and girls, despite them being identified as disproportionately accessing support for gender dysphoria; including those who have de-transitioned and failing to understand the underlaying issues of why they may wish to identify and transition to boys. This running parallel with many other conversations where their voices are largely missing, such as criminal gangs. The danger here, in issues of intense public debates, is that girls and young women consistently fall through the cracks, due to lack of consideration for their experiences.

Criminal gangs are presented as a male issue; ignoring the large number of females being affected. Within the history of work on youth subcultures, girls accounts and journalistic accounts based on them are largely missing. When girls do appear, it is in two ways: one appeasing the gendered ‘norm’ and reinforcing the stereotypical image of girl, the other a media fuelled panic over the ‘new breed’ of girl[1]. Due to impossibly high expectations of young women and girls, they are deemed uncontrollable and worse than boys, highlighting the particular barriers based on their sex and imposed gendered expectations of their behaviours and personalities.

People continue to acknowledge that more needs to happen to support young women and girls, but nothing seems to change with ongoing failures to acknowledge and address their specific experiences and needs. This no doubt affects services ability to respond and support in a way that is both accessible and impactful to girls and young women subjected to serious harm by men.

Gang environment is experienced differently by females to their male counterparts. Young women and girls have different routes in, predominantly mediated through connections to males. Young women and girls are potentially treated much more harshly by statutory services and the criminal justice system as a punishment for transgressing gender norms[2]. A series of reports highlight young women and girls voices of not being seen as victims and purely as ‘bad’ girls with a lack of critical analysis given to understand the different routes into criminal activity. The consequences here are that many are being imprisoned before trauma they hold is properly addressed.

Gender is a core aspect of the roles young women are given within criminal gangs while also being used as a tool by them to negotiate violence towards them; being perceived to be ‘one of the boys’ creates a sense of protection for them. Gangs operate within a hierarchal, patriarchal structure; where discriminatory, sexist views of women are the norm. Young women and girls live in continuums of violence both within gangs and within society.

Young women and girls disclose horrors of sexual exploitation, increasing criminal activity and the toll it is taking on their lives[3], including the magnifying pressure of becoming subservient females within gangs, fulfilling gender normative sexual, domestic care-giving roles. A way out of these limitations is to gain machismo by being seen to be doing ‘men’s roles, such as fighting[4] however, these females must work harder to become “one of the boys”. Becoming more violent to prove their ‘worth’, such positions usually gain more protection from sexual and domestic violence, while using aggression as a mask to hide their own vulnerabilities[5].

“A gangster girl goes and dresses like a man… One of them brave ones… Cause for a girl to be in a gang she has to be like a man” (Becket et al, 2013).

Young women and girls can link the roles given to them within criminal gangs and lack of respect towards them as an extension of wider societal inequality of the sexes and disrespect of women[6]. Experiences of individuals are clearly shaped by gender and consequent social status; with added barriers for young women embedded in a strong hierarchal and patriarchal environment. Naming the realities of what young women and girls are subjected to within ‘gangs’ with the understanding of sex difference and how gendered stereotypes are at play to systematise and normalise female subordination allows their experiences to be viewed with context, meanings, history, impact and consequences.

Stereotypical gender roles are reproduced to a heightened degree, descriptions of gender at play should be perceived as the route of the extreme forms of violence inflicted towards them, with misogyny and sexism at its core. Young women describe only being commodities to males; they are not seen as equal, but objects.

Girls taking on ‘male’ roles within criminal gangs whilst dressing in ‘boys’ clothes is understood as a form of protection against violence by males, while also creating a hierarchy between females; ‘gangster’ girls being perceived to hold power over ‘links’ – girls who are used by ‘gangs’ individually or within larger groups for sex. Double-standards of sexuality are emphasised within ‘gangs; through the use of language to describe young women and girls perceived to be sexually active with multiple ‘gang’ members, of course this is not the same use of language to ‘celebrate’ males. Gang sexual violence and exploitation cannot and should not be divorced from experiences of wider adolescent population as stereotypical double standards around male and female sexuality are not unique to gangs.

‘The role of a man’ is in stark contrast to the ‘role of woman’. Men and boys self-describe their involvement within gangs as ‘becoming a man, making money’, ‘support their mothers and sisters’, while ‘gaining man status’. In contrast young women are presented as primarily being used for male sexual gratification, submissive as ‘girlfriends’, ‘wifies’, or ‘baby mommas’ and a tool to “bring others into the group”.

While space of open discussions around the relationship of sex and gender reduces, reinforced gendered stereotypes are implemented. A ripple of effect of this limited space impacts some of the most invisible women and girls and the understanding of how gender is used as a tool for self-protection in some of the most dangerous spaces. In order to move forward and protect, we need to have honest conversations of how sex and gender interact, the dangers of girls feeling like they have to protect themselves from being female and the ways that young women and girls navigate their lives through the use of gendered stereotypes.