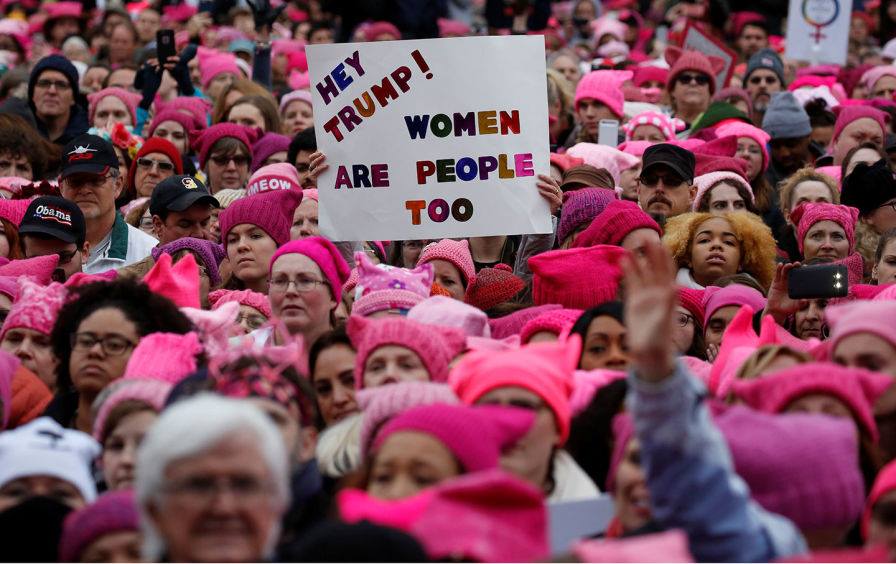 Many women in the UK will have been watching the election coverage of the US in the past few days, the outcome of which has ramifications not only for our sisters in the US but around the world on account of US global influence. We are glad to see Trump defeated in the popular vote, and in the electoral college, and have been horrified by his attempt to undermine democracy and by scenes of intimidation at the count.

Who can forget the worldwide Women’s Marches on 21 January 2017? Millions of women, appalled by the election to the White House of an overt misogynist who boasted he could ‘grab ‘em by the pussy’, protested Trump’s contempt for women’s sexual boundaries and his other inhumane anti-woman policies, extending from anti-abortion to an immigration policy that split over 1,000 children from their mothers. Over 800 protests took place across more than 60 countries, with estimates of 3-5 million women mobilised in the US alone. The ‘pussy hat’ rapidly became a symbol of the marches – a reference to our sex under attack, via sexual assault and loss of reproductive rights. As such, the pussy hat was criticised by some trans rights activists who object to understanding women’s oppression as rooted in our sex.

But women came together to protest against Trump in such large numbers because it was obvious that his election was a threat to their rights as women, that is to say, as female people. Sex matters and it mattered, centrally, in the Women’s Marches.

Almost four years later some feminists have apparently forgotten the power of these Women’s Marches in defence of our bodies. Some consider that Biden’s professed support for the Equality Act, which as proposed would harm women’s legal rights by conflating sex and gender identity, to be such a ‘deal breaker’ that they dismiss all those anti-Trump women, those who mobilised on Women’s Marches, as dupes and victims of gaslighting. In some pockets of feminist activism, voting for Trump in protest at Biden’s prioritisation of trans claims over women’s rights, is deemed not only understandable but a neutral choice. Some campaigners for women’s rights have gone further and argued that a Trump victory would have been a desirable outcome of the election, deriding the objections of left-wing women as ‘purity politics.’

Of course, it is wrong to regard the US Democratic Party as a party of the left. Those terms – left and right – originate in the seating of the French National Assembly at the time of the 1789 revolution. Those to the right supporting the established regime (at that time a monarchy) and those on the left supporting its overthrow. This construction of left and right maps poorly onto US electoral politics: at inception the Democratic Party (1828) stood for state sovereignty against federalism and the Republican party (1854) stood against slavery. Fast forward to the 1960s, and Nixon’s Southern Strategy to win over previously Democratic voting segregationists was the culmination of a process making the Republicans the party now more closely associated with white supremacy. Similarly, the Republican Party, although arguably the more feminist historically, became the overtly sexist party from the early sixties, when the New Right – in coalition with Evangelical and Catholic Social Conservatives – succeeded in remaking the party as one of traditional family (aka patriarchal) values, culminating in the election of Reagan (a process dramatized in the Netflix series Mrs America). Both parties are ‘establishment’ parties, neither is the electoral expression of organised labour or of social movements for radical change. Thus, most progressive political movements in the States – civil rights, anti-war, environmental, women’s liberation, gay liberation – have been located substantially to the left of either party, outside and often against the whole political establishment, even while the idiosyncratic US primary system permitted some left radical figures to run for office on a Democratic ticket.

The women’s liberation movement aims at a complete and radical social transformation to uproot patriarchy. This places it well to the ‘left’ of the US Democratic Party understood in terms of a left-right spectrum from revolutionary to establishment. Hence feminist critique of the Democratic Party has come historically from its left.

Right-wing Republicanism with its integral cohort of religious social conservatives, has long been the enemy of women’s liberation. Its latest incarnation in Trumpism has given a powerful network of Christian nationalists a dangerous central role, fundamentally shifted the balance of power on the Supreme Court, and grown them as a popular movement.

They have taken advantage of some women’s understandable dissatisfaction with liberal feminism in seeking to draw them under the wing of ‘common sense’ conservatism. By toning down religious rhetoric and reaching out a hand across the aisle, they have worked to smuggle a raft of reactionary biological essentialist, patriarchal-protectionist, law and order, and family values arguments into ostensibly feminist discourse.

The religious right plays a less powerful role in UK politics than in the US, but we cannot afford to ignore the same processes here. The US right-wing offensive against women’s rights has international aspirations, via organisations like Alliance for Defending Freedom its reach is global, including the UK, and has played a role in the recent anti-abortion law in Poland.  Similarly, feminist figures who are sanguine or enthusiastic about alliances with these forces have international reach and influence with social media followers of UK proponents in North America and vice versa.

As a matter of principle, feminists should oppose right-wing demagogues who seek to undermine democracy. As a matter of practical politics, we also need, at minimum, those basic democratic norms (including free speech) to function in order to effectively advocate a politics of liberation. Who cares if Trump, Trumpists, right-wing Evangelicals, Christian nationalists know that sex is real? Everyone knows that sex is real, even those people who for reasons of expediency, career interests, being nice, fending off their own distress, or on account of (purportedly) sophisticated academic theorising, pretend not to know.  This no doubt includes Vice-President-elect Kamala Harris, notwithstanding her virtue-signalling adoption of pronouns.

The left (as well as liberals and progressives) will have to deal with its cognitive dissonance. On the one hand having made historical commitments to many demands of the women’s movement (though falling short of liberation) while on the other hand frequently pretending not to know we are oppressed on the basis of sex. This is a contradiction, on which we feminists should put pressure at every opportunity. No such contradiction, or opportunity, exists on the right where lowest common denominator knowledge that sex is materially real can align easily with the subordination of women.

It is not purity politics to vigorously oppose the bolstering by ostensive feminists of a movement that seeks our oppression. Nor is it purity politics to object strongly to our concerns being put in the service of an anti-democrat who emboldens racially motivated armed militias.

So much for principle, what of practical politics? A few feminists have been attempting to lead a march rightwards on the basis of recognition of sex. In exchange for profile, they have advocated that women’s safety depends on the protection of right-wing patriarchs in power. Criticisms of this direction have been met with angry denials and defensive justifications. But now the symbolic leader of that power block will be out of office and a new establishment patriarch of the liberal-centre installed.

Biden may move to reinstate federal guidance on Title IX that gender identity overrides sex in education, including in sports.  However, since this guidance was hurriedly introduced in May 2016 at the end of Obama’s last term (only to be immediately rescinded by the Trump administration) many more people are willing to speak up about the impact on girls and women, especially in sports.  They include unassailable progressive voices such as Martina Navratilova, as well as Sandra Bucha, the swimmer whose legal fight, supported by the ACLU, led to the creation of Title IX in the first place.  Biden has committed to the adoption of the Equality Act (though it won’t move through the Senate unless the Democrats take control).  US feminists will therefore have the urgent task of engaging in the political process, raising critiques from the left in its true meaning – that is, from a place committed to a radical social transformation to uproot patriarchy and liberate all women. Seeking ready-made platforms provided by wolves in sheep’s clothing is no substitute for autonomous organisation and for political persuasion and engagement. Despite noisy announcements that ’there is no alternative’ to right-wing alliances, many more feminists have continued to work holistically standing for women on more than a single-issue.

Regardless of cognitive dissonance on pronouns, or gender identity, women knew when they marched in 2017 that their oppression on the basis of sex – their embodied experience as female people – was the issue. They still know it, and some in the US will be ready to make a critique of the Equality Act from the left, not from the right, because Women’s Liberation is a movement for radical social transformation to uproot patriarchy.

Feminist Amendments to the Equality Act is one such project, and they are holding a Forum on this subject on 14 November.

Like the misogyny of the religious right, the movement for the political erasure of sex is international in scope. It will be fought internationally by a growing autonomous women’s liberation movement which remains revolutionary in aspiration and by definition, therefore, never on the right.