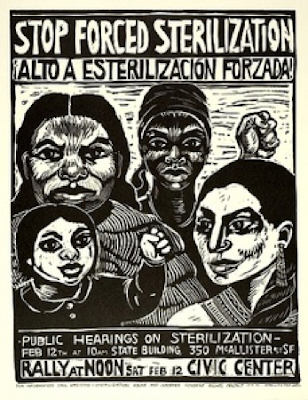 Keira Bell and the history of women’s rights, healthcare and the law

In 1976 Loretta Ross sued and won a case against A. H. Robbins, the manufacturer of the contraceptive Dalkon Shield. The intrauterine device, known by the US Centers for Disease Control since 1973 to cause higher rates of complications, had cost Ross her fertility. The experience made her a lifelong activist for reproductive justice. The women’s movement has had at its heart justice for women ill-treated at the hands of an often-misogynist medical system.

Globally, obstetric violence is increasingly recognised as a form of violence against women. Women’s health activism has a long history, from the campaign against the Contagious Diseases Acts of the 1860s, which subjected women suspected of prostitution to forced medical examinations, to the Irish Survivors of Symphysiotomy, who campaigned against the dangerous and invasive procedure performed on around 1,500 Irish women in the second half of the twentieth century, and the vaginal mesh scandal in the last decade.

So it is with the case of Keira Bell who, with another plaintiff Mrs A, is challenging the legality of hormone blocking and cross-sex hormone treatment for under-18s. The judgment in this landmark judicial review is due on Tuesday 1 December.

The case presented was that, without an appropriate statutory framework for the protection of the children’s rights, the treatment is unlawful as the children in question cannot give valid and informed consent, with reference to either Gillick or Montgomery criteria, to the treatment which is both life-changing and likely to be irreversible.

A second case lodged by Bell, challenging the NHS adoption of a Memorandum of Understanding which inhibits exploration of alternatives to transition, will now be dealt with as part of the NHS independent review into gender identity services for children and young people.

This legal case is long overdue. Concerns about the treatment of children at the NHS Gender Identity Development Service (GIDS) were raised at least 15 years ago and continued over a period that has seen an extraordinary rise in the number of referrals, especially of girls. Previous cases, notably at the General Medical Council against Russell Reid (2007) and Helen Webberley (2018), focused on whether practitioners followed standards of care. This case interrogates those standards.

A decision of the court in favour of Bell will profoundly impact the NHS independent review and open the way for clinical negligence claims by others who have been harmed. In a roundtable meeting with Government Equality Office in 2017, a representative of WPUK asked whether, given the exponential and unexplained rise in childhood referrals to GIDS, possible future negligence claims against the NHS are on the NHS Litigation Authority (now NHS Resolution) risk register. Medical negligence specialists are already accepting clients. The failures of GIDS, already exacting a huge personal cost on individuals, may well cost the NHS dear.

Some commentary on the case has argued that a win for Bell presents a risk to Gillick competence, which governs the circumstances in which children have capacity to consent to medical treatment, and to the Fraser guidelines, which set out criteria for contraceptive advice and prescribing. The argument before the court, however, is much narrower. It concerns whether informed consent can ever be gained given the specific nature of the treatment: experimental and likely irreversibly affecting far distant adult life choices, including sexuality and fertility, which are not truly imaginable by pubescent children and adolescents.

Several commentators have also noted that instructing solicitor Paul Conrathe is an activist lawyer with a long history of taking anti-abortion cases. It is difficult to imagine a more patriarchal case than that in 2001 where Conrathe, working with the Pro-Life Alliance – a single-issue anti-abortion party – sought an injunction on behalf of Stephen Hone to force his ex-girlfriend to continue an unwanted pregnancy. He then took on the case of Reverend Jepson in a judicial review of a Crown Prosecution Service decision not to prosecute doctors who had authorised a termination of pregnancy in a case of fetal abnormality, the grounds of which Jepson disputed. In a separate case he attempted to overturn the Gillick ruling.

Conrathe is currently instructed in two anti-abortion cases. One argues that the Abortion Act as amended in 1990 – restricting time limits from 28 to 24 weeks but removing time limits in cases of risk to life, fetal abnormality, or grave physical and mental injury to the woman – is discriminatory on grounds of disability. The other case argues that the National Institute for Health and Care Excellence (NICE) must change their abortion guidelines so that women are advised that a fetus feels pain, in contradiction to the most recent Royal College of Obstetricians and Gynaecologists review of the evidence.

The need for an independent, feminist legal strategy

Notably, Conrathe entered the field of gender identity cases not via a women’s rights case but on purely free speech grounds, which has always been a complex arena for feminist legal theory. Feminists may legitimately be wary that anti-abortion activists will attempt to co-opt a positive outcome of the Bell case to set precedent over informed consent in the case against NICE. They may also fear that it could reopen Gillick competency as attempted in the Axon case. It would be naïve to think the cases of someone who has worked with the Pro-Life Alliance are not taken in part in the hope of advancing a religiously motivated legal strategy.

Never has it been more important for an autonomous women’s liberation movement to have an independent feminist legal strategy. A feminist response to the question of disability discrimination would be to decriminalise abortion and place emphasis on women’s choice to continue a pregnancy rather than doctors’ permission to end it in “special circumstances”.

Gillick and imagining “future me”

At the same time, the Bell case hinges on very valid objections to the current standard of care. This needn’t impact abortion, where evidence for standards of care is comparatively strong. Similarly, Gillick competence depends on the complexity and importance of the decision at hand. As journalist Janice Turner says (paywall):

““Future me” is the heart of the debate. A child can understand that contraception prevents a baby or that abortion ends a pregnancy. “Future me” may look back at such things ruefully. But what if your younger self shut doors for ever? Keira Bell wishes she had been “challenged on the claims I was making for myself”. She was just a teenager, she says, so why was she treated as an adult? Her judicial review demands that under-18s be prescribed puberty-blockers only by court order. With 16- to 18-year-olds, this seems a leap. But the High Court must decide if any under-16 can have Gillick competency over their own sterilisation and sexual dysfunction.”

As a feminist organisation, WPUK supports the right of women to challenge current medical standards of care, and also fully supports the Gillick test of competence as well as the Fraser guidelines, which specifically relate only to the issue of giving contraceptive advice and treatment to those under 16 without parental consent.

After Loretta Ross sued for the sterilisation she had suffered as a result of the Dalkon Shield intra uterine device, almost 200,000 women in a class action suit won compensation of $2.4 billion, bankrupting A. H. Robbins. By 1990 the US was said to be in a birth control backlash, with commentators quick to blame an “unwitting coalition of long-time adversaries – manufacturing companies and courtroom litigators; feminists, right-to-life groups and religious activists, including the Catholic Church”. While that narrative has been challenged, even if it were true, it is unreasonable to expect that women should forgo their own fight for reproductive justice for fear of co-option by adversaries.

This is as true for Keira Bell today as it was for Loretta Ross in 1976. Keira Bell and her co-plaintiff Mrs A have shown considerable courage in pursuing this significant case. We eagerly await the outcome, which will have important implications for the ongoing NHS England review into GIDS.

Interested in this case? Read an interview with Keira Bell

Update: On 1 December 2020, Keira Bell won her case against the Tavistock.