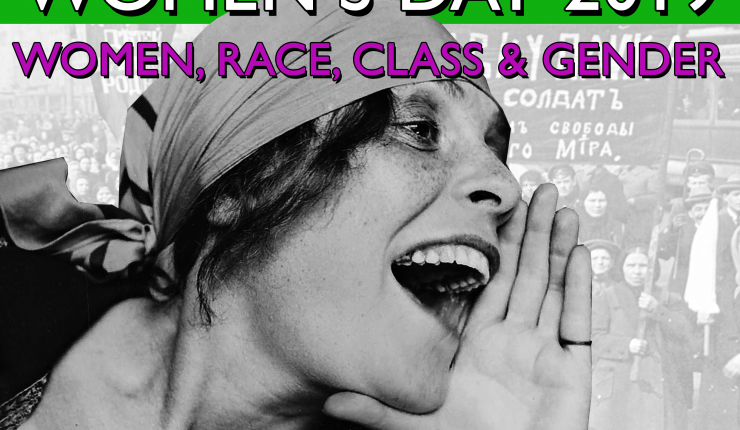 Kiri Tunks is a socialist feminist and trade union activist. She is a co-founder of Woman’s Place UK. This is a transcript of the speech she gave on International Women’s Day 2019 at a Morning Star Readers’ event: Women, Race, Class & Gender.

Woman’s Place UK (WPUK) was founded in September 2017 to ensure women’s voices were heard in the consultation on changes to the Gender Recognition Act. Our experiences during that time led us to broaden our campaign to a wider set of demands which we launched in January this year.

In just over a year since our inception, WPUK has built quite a following.

We have also built quite a reputation.

Some of them bear no connection to our pretty reasonable demands.

Because it seems that in debates around sex and gender it is easier to defame and slur than engage with very real concerns.

Sex is a protected characteristic under the law.

Our campaign has been based on the single sex exemptions which exist in the Equality Act.

These allow for the separate provision of single sex services, spaces, places and employment in recognition of the fact that:

Yet saying so is now portrayed as hate speech and fascism.

And fascism must be crushed…

The latest example of this was a tweet this week from radical left campaign, Jewdas, which proclaimed:

“Good afternoon. TERFs are fascists and should be treated no differently from Nazis.”

This produced responses which encouraged the use of the Nuremberg Trials and cyanide pills.

Such a conflation is both offensive and dangerous in the extreme.

This rhetoric minimises the history and impact of fascism which has violently suppressed and persecuted millions of people and caused the murders of millions more. It diminishes the murder of 6 million Jews by the Nazis and the horrors of the Holocaust. It belittles the current threat of modern fascism, growing fast across Europe and with real signs of growth here.

To compare the demands of women campaigning for their rights to the cancer of fascism demonises any woman speaking up and silences her. This can only lead to a diminution of women’s liberation and the erasure of women’s rights.

Violent images of what you can do to TERFs are easily found on social media. Women identified as TERFs have been subject to violence, intimidation, threats, demonization, and vilification. Some have been cast out of organising/political groups or ostracised at meetings and events.

It’s like the Wild West out there. Loads of trigger-happy gunslingers and not a sheriff in sight.

Our demands are legitimate.

In fact, they are in line with the law as it currently exists –

And as it should exist in any properly functioning democracy

Some have found these demands to be troublesome but they are no more than we are due and the very least we are prepared to accept.

The reaction to women calling for these rights has been astonishing.

We have been threatened, abused, vilified, demonised, slurred, libelled and cast out.

WPUK has organised 21 meetings around UK

Every meeting has been threatened.

We have to hire security and release the location at the last minute.

Our YouTube channel has over 1700 subscribers with 135,000 views of our films

We are regularly sent messages of support by women too frightened to say so publicly.

And we have held meetings all over the UK from Newcastle to Bath, from Cardiff to Norwich.

All pretty much sold out.

Civic and political society have largely failed us.

There are some honourable exceptions

Although it should not have been a revelation…

When, in history, have women won any rights without having to fight to make their voice heard?

Without kicking up a fuss?

Women are meant to know our place.

Stay in the shadows.

Do as we are told.

So, if you find our campaign troubling, ask yourself what troubles you about women asserting themselves and their rights?

Because I’ll tell you what I find troubling:

For all these, experience is exacerbated by class and race.

There has been a huge increase in racist hate and assault

I find all that deeply troubling and so should you.

I’ll tell you what else I find troubling…

The abject failure of any political party to

We have actively tried to engage with politicians and parties of all hues.

Only one party leader has attended one of our meetings – Sophie Walker of The Women’s Equality Party.

Something else I find troubling…

The political cowardice of councils all over the country who are happy  to casually change the protected characteristic from sex to gender without a thought for their obligations under the Equality Act, but who won’t host a meeting for women to discuss their rights.

Leeds Council pulled a booking we had organised through the sponsorship of a councillor on the day of the meeting – pretending it was because the ceiling had a crack.

A subsequent meeting with the Leader gave us no faith that women’s rights are safe in that city.

The moral bankruptcy of organisations (funded by public money)

The Equality and Human Rights Commission guidance on the Equality Act was wrong. A fact they only changed after it was pointed out to them

They have failed to broker discussions between groups with protected characteristics as is their duty under the PSED.

Stonewall, purportedly a group representing LGBT people in this country, lobbied to have single sex exemptions removed from the Equality Act without any thought of the impact this might have on lesbians and other women

…is the blind arrogance of the labour movement

And this is troubling too…

A principled exception to this has been the Morning Star who stuck their neck out early on to try to cover the debate, and more recently Left Foot Forward.

Magazines like Red Pepper and Socialist Review have been happy to print libellous claims about us and then refuse us a right of reply.

Largely, it has been the Times, the Spectator, The Economist and The Telegraph that has reported on the debate and women have been criticised for engaging with them

Now the Guardian has published one or two pieces, but for the most part has been very one-sided in its approach – odd for a media site that proclaims its commitment to sharing many voices

Coverage of women’s concerns and questions has been left largely to campaign websites, blogs and social media – often anonymous for very real fear of reprisals.

Actually, all of that’s more than troubling. It’s a disgrace.

Women have every right to proper representation and consultation.

But when we complain or point this out, we are branded as TERFs and Nazis.

Well maybe we are the modern-day witches.

Or at least the granddaughters of the ones they couldn’t burn.

We are troubled; deeply troubled.

And we intend to keep fighting for our daughters, our sisters, our mothers and our friends.

And we hope that you will join us.

And if you think women have been troublesome so far, I’m telling you, you ain’t seen nothing yet.