We have pulled together a Twitter thread created by Lisa Mc Kenzie, a feminist and independent policy analyst.

Not everyone’s insomnia cure is to pore over Hansard archives but here follows a thread (which I might continue to add to, depending on future incidences of insomnia) about the origins of the Sex Discrimination Act 1975. 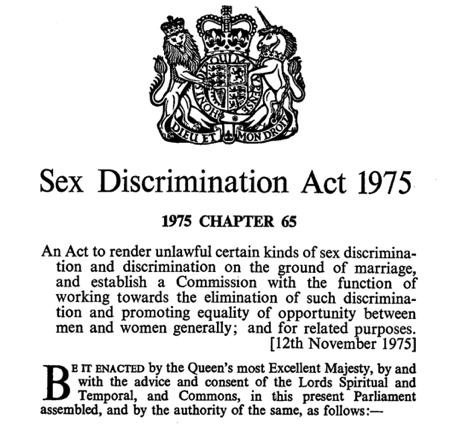 It received Royal Assent on 12 November 1975 and is regarded as landmark legislation for women’s rights in the UK. Many of the principles contained within the Act have been carried over into later legislation, such as the Equality Act 2010.

The UN had designated 1975 International Women’s Year and there appears to have been a raft of work in the run-up to explore discrimination against women, as this excerpt from ‘The Official History of the British Civil Service’ (by Rodney Lowe) indicates.

Margherita Rendel states in 1978 (‘Legislating for Equal Pay and Opportunity for Women in Britain’) that there was an unsuccessful attempt to amend the Race Relations Bill (which would become an Act in 1965) so that it covered discrimination against women.

Rendel goes on to note that in each subsequent parliamentary session, attempts were made to introduce a private member’s bill on discrimination against women. They received increasing support in the House of Commons but were defeated.

Eventually the Anti-Discrimination Bill, defeated in the House of Commons, was introduced in the House of Lords in 1971 by Baroness Seear, a member of the Liberal Party. At this point, Seear was also President of the Fawcett Society.

Unusually, the Bill was referred to a Select Committee, which then took two years gathering evidence on the discrimination faced by women. It concluded unanimously that there was a need for legislation.

Rendel states that Conservative members of the Select Committee “angrily defended their report on the floor of the House of Lords against the attempts of their party leaders to denigrate their recommendations”. We now dive into a House of Lords debate on 14 May 1973… You can read the Hansard transcript here.

Baroness Seear kicks off the debate, first thanking the Chair of the Select Committee, Lord Royle. (You’ll note that what was the Anti Discrimination Bill has been renamed the Sex Discrimination Bill. I’ve not been able to establish the exact point at which this happened.)

Lord Royle starts by noting how procedurally unusual it is for a Bill to be referred to a Select Committee. (A similar process had taken place in the House of Commons. Hence his reference to “parallel activity in another place”).

Some frustration voiced by Lord Royle, who has read in the press suggesting that the Government did not intend to proceed with the legislation but instead introduce legislation of its own in the next parliamentary session.

The Minister, Viscount Colville of Culross  responds indicating that whilst the Government is “fully in sympathy with the underlying purposes of the Bill”, they have various reservations.

We can see origins of the single-sex exceptions and General Occupational Requirement (both features of EA 2010): “There are also likely to be many jobs where public taste or decency establishes at any rate a strong presumption in favour of the employment of one sex or the other.”

Next the Minister moved on to talk about education. Even four and a half decades later, still shocking to see these figures on the numbers of girls in education. But a reminder of what progress there has been too.

The Select Committee appears to have recommended that there should be a move towards the discontinuation of single sex schools. The Minister objects, saying: “The Government think it right that as much freedom of parental choice as possible should be maintained.”

The Minister expresses a hope that there will be a change in the “social climate” that enables girls and boys to study any subject they choose. (“In principle, I think it is a good idea that boys should cook and that girls should know how to mend fuses.”)

Ending his speech, the Minister then spends some time speaking about how to configure an enforcement body. Interesting to note that he also laments “the lack of guidance about the exceptions of which I spoke earlier”.

Lord Maybray-King (Labour) then asks why the Government has not sought to amend the Bill and the Minister replies confirming press reports that they intend instead to bring forward their own legislation, for which they will produce a consultative document “as soon as possible”.

Next up is Baroness Summerskill (Labour). She is evidently unhappy (angry?) to learn that the the work of the Select Committee is to be abandoned in favour of a Government bill down the line.

Interesting aside: Edith Summerskill was the grandmother of Ben Summerskill, who was the CEO of Stonewall from 2003-2014.

Back to the debate. Intervention from Lord Shackleton (Labour) who is unhappy with the Government position. He also says: “I find it quite extraordinary to use the fact that there are now more highly educated women than ever before as an argument that everything is all right.”

Lord Shackleton is adamant that a legislative approach is required to tackle discrimination against women.

Lord Reigate (Conservative), another member of the Select Committee, also expresses his exasperation at the Government’s plans, saying: “I hesitate to accuse my own Government of discourtesy, but I think that in fact we have been rather discourteously treated.”

He goes on to emphasise that he was not an enthusiast for a legislative approach, but that he changed his mind as he was “amazed by the degree and the wide field of prejudice which exists, and which exists most importantly of all to the damage of our economy”.

Side note: Baroness Wooton studied Classics and Economics at Girton College, Cambridge from 1915 to 1919, winning the Agnata Butler Prize in 1917. She gained a first class in her final exams, but as a woman she was prevented from appending BA to her name.

Anger from Baroness Summerskill and Lord De Clifford that the Minister (Viscount Colville) did not intend to engage in the debate further. The Minister responds saying they are wrong to presume that the work of the Select Committee was in vain.

Baroness Seear re-enters the debate, emphasising that the Committee was of the wrong view that it had accumulated sufficient evidence that the legislation was required. She again advances the idea that single sex schools should be phased out in order to tackle sex discrimination.

She concludes: “I do not think there is any necessity to wait for a new vehicle to be brought forward by the Government. I maintain that the Bill now before the House, suitably amended, if you like, can adequately do this overdue task.”
Baroness Gaitskell (on Bill wording): “The word ‘suitable’ could be interpreted by women discriminating against men for a job, and vice versa; but I have a notion that it could more frequently be grasped by those men still hesitating to afford women equal opportunities with men.”
And then a very entertaining side swipe from Baroness Gaitskell regarding the attitude of Church of England Bishops to the campaign for women as priests (as reported in The Times that morning).

Viscount Hanworth says he agrees with the principles behind the Bill, but is not convinced of the need for legislation: “I do not believe one can change things very greatly just by setting up a Board and making penalties. What we are trying to do is to change people’s attitudes.”

More discussion about language in the Bill and the way in which ‘suitability’ might be interpreted. Lord Gardiner shares an anecdote about a female candidate for Queen’s Counsel and the lack of toilet facilities for women. (Plus ca change…)

Baroness Summerskill dryly remarks: “…the stock answer of the Government is, ‘We always choose those whom we consider the most suitable’. Curiously enough, women are generally excluded.”

As they grapple with language, Lord Shackleton wonders whether there is a better way to phrase the relevant clause: “always provided that individuals shall be treated on their individual merits and not with regard to the generalised or assumed characteristics of their sex”.
Baroness Spear laments Lord Hanworth’s references in the debate to the “average woman”.

More discussion about the idea of a General Occupational Requirement and whether the Bill should contain an exhaustive list of occupations or whether it should evolve in line with developing case law.

Lord Conesford voices his concerns about the threat to single sex schools, whilst declaring his position as Vice President of the Girls’ Public Day-School Trust. He feels that outlawing single sex schools would be “a most illiberal, tyrannical and arrogant act”.
Concern from Lord Hanworth that the single sex school issue might be divisive on party lines is dismissed by Baroness Phillips (Labour), who explains that she had attended a single sex school and says that Lord Conesford “has argued this matter in his usual persuasive way”.
Baroness Seear (apologies for earlier misspelling – Hansard is wrong!) doubles down on her view about single sex schools: those currently in existence would continue but the Bill would prevent the creation of any new single sex schools.

“…there is the other very real point, that discrimination is rooted in education; it is the customs and attitudes and points of view put over during early life in school which so largely determine whether boys and girls will grow up as unconscious discriminators.”
“It is the unconscious discriminator, the discriminator who discriminates as a matter of course, with whom we have the greatest difficulty, not the person who is the all-out declared champion of the rights of his own sex.”
Lord Conesford presses on, refusing to withdraw his Amendment on schools.

Lord Platt: “I hope it is not too late to see whether I can stir up one or two people from various parts of the Committee, including perhaps the Bishop’s Bench, in order to elucidate a little more clearly the arguments for putting in this clause.”
This provokes Baroness Summerskill to (once more) take aim at the Church of England and its attitude to women: “Use women by all means, exploit their services, and far from giving them equal pay give them nothing.”

Lords Belhaven and Donaldson take issue with Baroness Summerskill’s tirade. Lord Gardiner disagrees, saying the Church, as an employer, should be in the scope of the Bill: “there is no reason why they should not conform to the ordinary law, as it will be, on sex discrimination”
At this point, the Bishop of Rochester chips in, albeit claiming he had not been prepared to participate in this debate. (It would be another two decades before women were ordained as Church of England priests.)

Lord Derwent (Conservative) states his objection to giving a Sex Discrimination Board powers of investigation because “The people of this country are getting fed up with the multitude of people who can interfere with them”.
Response from Baroness Seear (Hansard spelling gone AWOL again!).

Brief discussion about how a Sex Discrimination Board would be constituted before the debate closed. I hope to resume this thread at a later date once I’ve read later Hansard transcripts on the passage of the SDA.
Tweet
Share