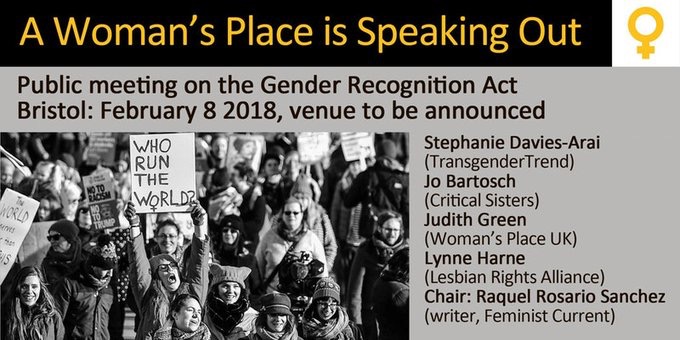 If you are thinking of organising a meeting in your area we’ve produced this toolkit which pulls together what we’ve learned from our experiences. Some of the feminists who organised a WPUK meeting in Bristol in February 2018 discuss how they did it.

This was only the third meeting that we had help organise at a time when very few meetings of this nature were happening. We think the climate has changed significantly since then and that it is easier now for women to organise local meetings themselves. This testimony shows how far we have come.

When we had the meeting, beforehand it felt ‘tentative and dangerous’ and having to persuade people to come. Now ‘everyone’ has heard of it and it’s amazing the number of women who’ve come round and are very angry – lots of them are in in so many of online groups – and they mention they were at that first meeting or heard about it.

Elaine Hutton says “I think that’s what I’m personally ‘proud of’ that we raised awareness. There was such solidarity and relief that the meeting came off. And good co-operation between WPUK organisers and local women from different groups.”

Speakers from Transgender Trend, Lesbian Rights Alliance, Critical Sisters and Woman’s Place UK represented different stands of the fightback against the erasure women’s and lesbians’ rights and the attack on children’s and young women’s healthy bodies.

There was a simultaneous sense of being tired and stressed out from managing security – worried something might have slipped past our notice – and a huge high from witnessing the event go ahead on the night, knowing we had contributed to making that happen.

A highlight was the sense of having provided a forum for women to voice questions and concerns that had been held back and silenced for months, even years. Hearing the Q&A and the huge amount of “What can we do?” questions and personal experience stories from women from all walks of life, many active in the Women´s sector and Left parties – all who had found it difficult, if not impossible, to raise questions concerning the issues surrounding the potential clashes between women´s sex-based rights and the proposed Self-ID GRA Reform.

If you’re thinking about putting on a meeting, we’d say:

We’re so proud that between a small number of organisers we were able to contrive and pull off the third ever WPUK event in an extremely toxic and misogynistic environment that had made out any attempts to discuss the issues were bigotry and hate speech. This is the best aspect of WPUK meetings: that each one reaches women who before had felt isolated in their concerns – each inhabiting a separate island with no one tangible to discuss their concerns with. The events provide a physical space and a real opportunity for women to build bridges between each other.

Watch the films of the speakers at the Bristol meeting: