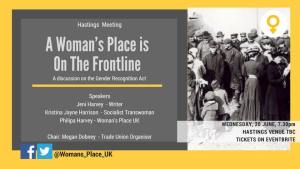 IHave you thought about organising a WPUK where you live? We can help you and this account of how some of our supporters in Hastings did it should encourage you.

Ever-increasing numbers of adolescent kids believing they were aliens in their own bodies, trans people getting posts as women’s officers and using their positions to slap down women who expressed concern about their kids? Organisations we were members of changing the rules about women on advice from Stonewall, and not even telling us, let alone calling for views?

What do we do?

It must have been back in 2015/16 that I felt the stirrings of confusion and disbelief amongst my sisters in the women’s movement on Mumsnet as we were being told our questions and concerns over women’s rights were ‘transphobic’ and we were supposed to keep quiet and to not worry.

Then my son started school and parent-friends in a neighbouring county were reporting that their local authority had asked them to clarify how their 4 year olds ’identified’ with regards to gender on the school admissions form. My initial response was to think this was some kind of Daily Fail (mis)reporting but it was true. I looked at my son and wondered how he would identify if I asked him; my guess was that he would probably have responded with, very reasonably in my opinion, ‘a hedgehog’, given that that was/is his favourite thing. Feminists had read the situation for what it was and could predict where this was heading. Coupled with my love of sport, and seeing the massive disparity in transwomen being allowed to compete alongside women, I decided to get involved in doing what I could to help protect women and girls.

Not long before Labour conference in 2017, Maria MacLachlan was attacked at Speakers’ Corner for daring to photograph a public protest by trans activists. My resolve was solidified. Woman’s Place UK formed soon after and I started talking to Kay and other local socialist women about having a WPUK meeting in Hastings.  It was paramount that we stood up and forced this conversation into the open; our fears may turn out to be misplaced but we deserved the right to ask questions without fear of violence.

I’m a grandmother now, but Louise is still in those growing-family years, and an active member of Mumsnet, so she heard about all this sex-and-gender turmoil long before I did. At Labour’s 2017 conference, she introduced me to some women who were running a fringe event to discuss the issue. I didn’t go to the event, but I heard about a year of bullying and malpractice some of them had suffered because they asked awkward questions.

Pondering all this, trying to remember what I’d thought of sex and gender when I was a kid, I decided to write a piece on my own experience of sex and gender. I was vice-chair of my CLP at the time, and no sooner had I got my piece written than I found myself trying to referee a spat over the issue in a local leftie facebook group. What I discovered there was that there is *no* middle ground in this debate. You agree with the ‘affirmation only’ Queer Theory view, or you are a TERF and a Nazi.

The piece I’d written got snapped up by a website called FairPlay for Women, and, having been introduced to it, I read the whole site with increasing horror at the pressure being put on women to conform. Meanwhile, as my article got noticed, the tone of the debates got worse, and abusive, anonymous attacks started.

Then discussions on a women’s page led to the suggestion Louise and I should run a Woman’s Place UK meeting in Hastings, to hold a more comradely discussion.

We started asking around for venues and almost immediately, one of the people who’d been ranting in all those Facebook rows, sent a scandalous email to our local council, telling them to stay clear of the mad, bad, Louise and Kay, and the dangerous WPUK. Then one of the venues to which we’d made enquiries said the local Pride director had sent them a similarly slanderous email. We had been to the police and the council early on, and told them exactly what we planned to do, and agreed to stay in touch, so the email’s claims about our ‘secret’ and ‘deceptive’ plan to hold a WPUK meeting were, we thought, pretty easy to see through. I ran a series of memes to say the debate was both necessary and respectful, but two venues said ‘yes’ then ‘no’ even so.

We were getting rather too close to the advertised date of the meeting when we found a venue run by some gutsy women who weren’t going to be scared off easily. We had Sarah from WPUK advising and helping us, but we did feel pressure rising as we dashed to put everything in place. Local Pride and Rainbow Alliance groups put out messages telling people not to come to our meeting, lest their minds be filled with hate, and I wrote my own piece saying why I thought they should come.

The drama built up. On the day of the meeting, a bomb-threat was added to the attempts to head us off. A friend who lived near the venue was keeping an eye on the place, and saw police doing the same. We were booked out, and Sarah was suggesting to us that it was time to release the venue details but I was reluctant, as a couple of the too-late applications for tickets seemed to me to have connections with the would-be saboteurs.

I felt as though I hadn’t slept for weeks. I’d been buzzing – I always find event management a strange mix of exciting and distressing but never before had I been involved in setting one up with an ‘opposition’ team trying to thwart it. Hearing about their plots to ‘silence’ us make me take triple care over ensuring everything would work. It was a fantastic experience, because of those who supported us – in the police, the council, our CLP and from the women’s movement, we were discovering people who were used to working in the face of aggressive disruption. I was learning from them, daily and I know that the friends I made then were friends for life – the very antithesis of ‘fairweather friends’.

By the time our chair, Megan Dobney, called the meeting to order, I felt quite overwhelmed with a new discovery about what ‘solidarity’ really feels like. The women who ran the venue, the security guards on the door, the speakers, the people who had had the courage to buy tickets and come despite all the barracking around the town, the female councillor who told us she didn’t necessarily agree with our views, but that women should always step up to help each other when threatened because ‘some people can’t stand strong women’. Our speakers – Philipa Harvey, Kristina Harrison, Jeni Harvey were calm, fair and informative. The speakers from the floor were electrifying – brave women, some who had been bullied or side-lined for their views, some who hadn’t had a chance to speak before.

Kay and I had to devote a lot of time and energy into planning the event alongside Sarah. This was mainly because we had local trouble-makers to contend with.  However, it was a fantastic ‘know-who-your-comrades-are’ sorting exercise! The police were very reassuring when we sought their advice and assistance.

The day of the event was wonderful! To see, hear, and feel, all us women coming together in solidarity and with the unspoken recognition that yes, we bloody well have the right to stand up and be heard, well, it was life affirming. The power in that room could’ve taken on, and defeated, an army of hardened misogynists.

Our speakers presented the different angles of our struggle most reasonably and this led to a very constructive Q&A session that furthered everyone’s understanding of this issue and its very real impact on women and girls.

The Rest of My Life

It was all over remarkably quickly, we’d tidied up the venue, had angsty moments with people who’d lost each other, or lost things, and then we tumbled into the pub – and that night I now look back on as a turning point in my life. I had learned that I have power, I have energy, and that if I do what I believe is right, even against opposition, new people come to the fore, people I understand, and who understand and support what I’m trying to do. I owe immense gratitude to Woman’s Place UK: a transformative group for women.

WPUK events are addictive, you can’t just attend one. And, although the speeches are available online, you don’t get to feel the amazing atmosphere of being there and it’s that atmosphere that has helped drive me on and feel reconnected to the women’s movement as a whole. To organise a WPUK event is to feel part of something much bigger than yourself and the present, it is to know that you are a part of a team working tirelessly to improve the lot of our sisters growing up now, and those yet to be born.