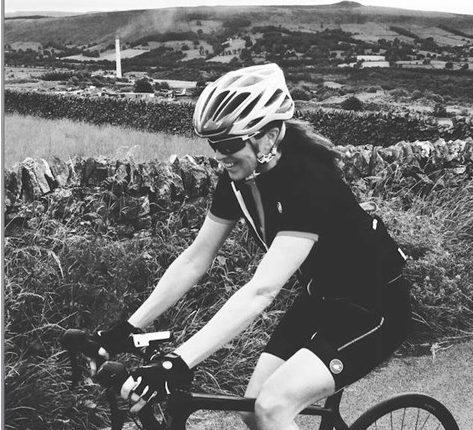 Jean Hatchet explains why she is cycling to honour women murdered by men they knew and to raise money for the nia project because nia save women’s lives.You can make a donation here.

On March 9th 2017 I began to ride my bike for women murdered as a result of male intimate partner or family violence. I have so far ridden for 257 women and I can see no point in the distant future where I will be able to stop. I have ridden 6330 miles. The bodies of dead women continue to mount up behind me, waiting for me to ride in their honour.  The names I don’t yet know. The faces I have not yet seen.

Some days it is overwhelming to recognise this. Some woman may be murdered today, even as I write this. Or tomorrow. We will be unable to stop it. Behind closed doors throughout this land men are threatening to kill women who love them and some of them will.

The first woman I rode for was Katrina O Hara who had reported her ex-boyfriend to the police on a number of occasions in the 56 days before he murdered her. The police had confiscated her phone and instead took her murderer’s view that she was the attacker. This was after he had repeatedly slammed her into a concrete floor. She continued to report to no avail. He then stabbed her twice in the chest until she was dead after waiting for her outside her shop. She had no phone to call for help.

Injustice litters the stories of the women. Police failures. Opportunities missed to save them. Lack of resources to rescue them. This must change.

On the 7th September 2019 at 1pm at Hampstead Heath women are invited to join me in riding my bike in their honour. We will ride our bikes for all the women murdered since I began the project. I am forever indebted to Karen Ingala Smith and Claire Moore who both compile lists of the women murdered. They will both be riding alongside me.

Women will join regional rides being organised. So far we have Leeds, Manchester, Birmingham, Cambridge, Cardiff.

It is absolutely vital that this mass bike ride will be women-only. It is essential to the project that we acknowledge the sexed nature of this crime. It is vital that statistical integrity is attached to the figures. Men murder women because they are women.

In objection to the fact that I have said that only women will ride, today I had a man offer to strangle me. He negotiated his price openly with another man on the internet. The first man had stated he would pay for someone to shove my bike down my throat.

My crime? To say that a ride for murdered women would be attended only by other women. Women have to be allowed to self-organise. There are times when this is the right thing to do.

It is sad that the argument over trans rights will inevitably take over from the original intention of my rides. The rides, and this one off mass ride, are part of a project intended to honour women who died at the hands of men they knew. I want their names to be loud. I want their stories to be remembered. I want to make their lives and brutal murders mean something.

So we will ride.

It will be the Female Peloton.