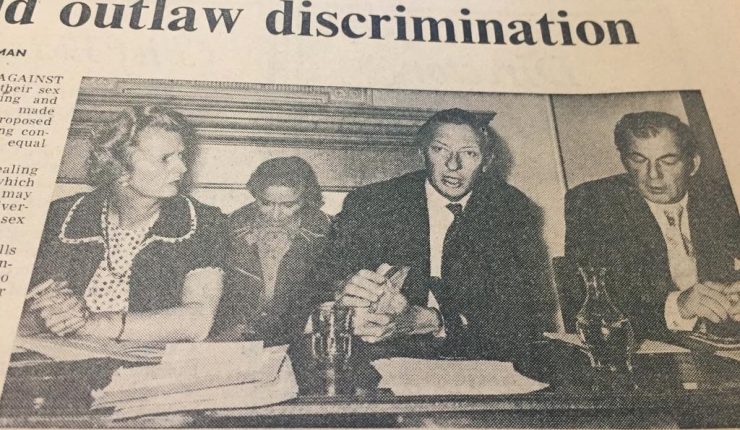 We have pulled together a second Twitter thread created by Lisa Mackenzie, a feminist and independent policy analyst. This thread summarises some of the press coverage surrounding the Equal Pay Act 1970 and the Sex Discrimination Act 1975.

Last month, I spent a couple of hours in the Women’s Library at the London School of Economics, looking through their archival material on both the Equal Pay Act 1970 and the Sex Discrimination Act 1975.

First up, a column from The Times on 4 November 1968. It anticipates a conference that was to take place the following week in Church House, Westminster. “Its most controversial and exciting feature will be a discussion panel of which the chief member will be Barbara Castle.”

1968 was “both Human Rights Year and the fiftieth anniversary of The Vote, as well as the year in which women came out on strike for better pay”.

The article notes one of the objectives for the year was “elimination in Great Britain of all forms of discrimination against women”.

It ends saying “It is perhaps too much to hope that it will be the conference to end all such conferences but it could be the first united step on the road towards the ending of hostilities that none of us want.”

Next a piece from The Guardian on 29 November 1973 framed around the Conservative Government’s consultative document containing proposals for ending discrimination against women (that would become the Sex Discrimination Act 1975).

Lindsay Mackie interviewed two women “about the way in which the liberation movement has affected their work and life style”.

“I used to be full of middle class politeness, now I just say fuck it. I just won’t talk to men who are blatantly sexist, what’s the point?”

A piece in The Financial Times on 3 November 1973 considers the Consumer Credit Bill under which “discrimination on grounds of sex or race in the granting of consumer credit will be forbidden”.

The article states that “Sir Geoffrey Howe, Minister for Consumer Affairs, particularly had in mind in drafting this clause a greater measure of justice for women. The Government feels that women are often unjustifiably refused loans merely because of their sex.”

A huge piece of idiocy?

Jumping back a couple of months, The Financial Times reports (on 26 September 1973) that Enoch Powell attacked the Anti Discrimination Bill (that would become the SDA 1975) describing plans to set up an equal opportunities commission as “a huge piece of idiocy”.

And now to a Guardian editorial on 18 September 1973 about the Conservative Government’s proposals to ban sex discrimination which they predicted that “the leaders of the Women’s Liberation movement will not like”.

The editorial notes that there were three Cabinet Ministers present at the press conference launching the green paper noting that “the Government’s popularity among women voters has slumped with the rise in the cost of living, particularly the jump in food prices”.

The Guardian sees that political reasoning aside, there is “an important social reason why a bill against sex discrimination is needed”.

Its view is that the aims of the Equal Pay Act 1970 cannot be achieved without tackling sex discrimination.

The news story on the same day mentions planned single sex exceptions. “It gives as examples foster mothers, jobs which demand authenticity – such as acting – institutions of single sex such as convents and places where communal living might require a single sex, such as ships.”

The FT also carries a piece on the same day entitled “What ‘women’s equality’ should mean”. Again, the writer expresses scepticism that “proponents of women’s liberation” will be happy with the proposals “for it is by no means a radical document”.

In a nod to what we may now call intersectional discrimination, the article quotes Ms Sonia Pressman Fuentes who says “minority group women may not know whether they are being discriminated against because of their race, national origin, sex or a combination of these reasons.”

(The FT feels the need to explain the use of ‘Ms’ here. “For the uninitiated. ‘Ms’ is the title adopted by ‘liberated’ women who will not accept ‘Miss’ or ‘Mrs’.”)

Another mention of the proposed single sex exceptions.

The writer also notes: “The trouble is that there is no serious provision for overcoming the notorious reluctance of many trade unions to end the sex discrimination within their ranks.”

He ends the piece stating his concerns about the impact of both parents working full-time (“the next generation will show up badly for it…the literature on maternal deprivation is fairly conclusive”). He is worried women may have been “led by feminist propaganda”.

For anyone who is interested, these are the archives I viewed:

If you enjoyed this thread, read Lisa’s earlier thread on about the origins of the Sex Discrimination Act 1975