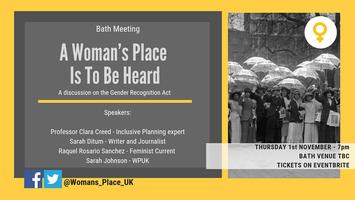 Have you thought about organising a meeting on women’s rights? We have produced guidance to help women do just that wherever they are.

This is an account by Bo Novak who co-organised  a WPUK meeting in Bath in November 2018.

We were a small loosely organised group of feminist women who felt disenfranchised from local meetings and actions, mostly organised by students at one of the two local universities (Bath University and Bath Spa University) or by the local Women’s Equality Party branch (which we discovered did not have a strong analysis of why women’s rights were less equal than men’s).

We wondered if there would if anyone would come to a Bath meeting, given Bath’s proximity to Bristol (12 miles) where two other similar meetings had taken place, including one organised by Woman’s Place UK.

We also initially felt perturbed by the need to keep the venue secret in case of protests (Bath is a small place!) and were disturbed and concerned by the aggressive protest at the Jam Jar event (not a Woman’s Place event but nonetheless involving some of our supporters and speakers) where ticket holders were forced to run the gauntlet of masked anarchist demonstrators.

We debated venues and realised that in a town of less than 100,000 with a great many ‘heritage’ buildings, the choice of venues was limited if we wanted somewhere that was accessible to all women, reachable by public transport, and run by people who would not be cowed by a possible orchestrated campaign of complaints by people who want to stop women meeting to discuss our sex-based rights. A lot of our time was spent scouting and evaluating venues.

We put off having an event until we found the right venue which in the event was in the city centre, held 100 people and whose owners and management respected our ability to run a safe and respectful meeting.

Our panel included a local journalist and writer, Sarah Ditum; a young academic feminist from Bristol, Raquel Rosario Sanchez, who had also been involved with the Bristol Woman’s Place events, and a Woman’s Place rep/trade unionist, Sarah Johnson. We also featured a retired professor from the University of the West of England, Clara Greed, who spoke about the importance of single-sex toilets, which was the surprising hit of the evening and which has turned out to be increasingly topical and popular if the Youtube views are anything to go by!

We shared out jobs between us, e.g. managing the Eventbrite ticket allocation, liaising with our speakers, stewarding on the night, and live tweeting on the night using #WPUKBath. We had great support throughout from both Woman’s Place UK and the Bristol women who had organised events before us.

On the night we were full to capacity and our event was unique in that the venue had a bar at the back of the room, so we were able to have an interval with drinks and networking after the event without having to decamp to the pub. We were proud to have the Woman’s Place UK banners as a backdrop and Woman’s Place hi-viz tabards indicating which women ticket holders could approach for help and information.

And we welcomed the media in: BBC Points West came along and our meeting (along with a very small protest outside) were featured in both the early evening and the late night bulletin, along with some thoughtful interviews and some context (such as the earlier aggressive attempt to shut down a meeting in Bristol).

For us, the factors that made our event a success included:

We were humbled by the number of people who travelled (including some women from Wales), as well as the number of local attendees, including many women who came on their own but ending up chatting to lots of other people and the speakers. We all ended the night on a high, having learned something new, met new people and shared a sense of solidarity.

You watch the films of the speakers at #WPUKBath here:

Read our guidance on organising a meeting