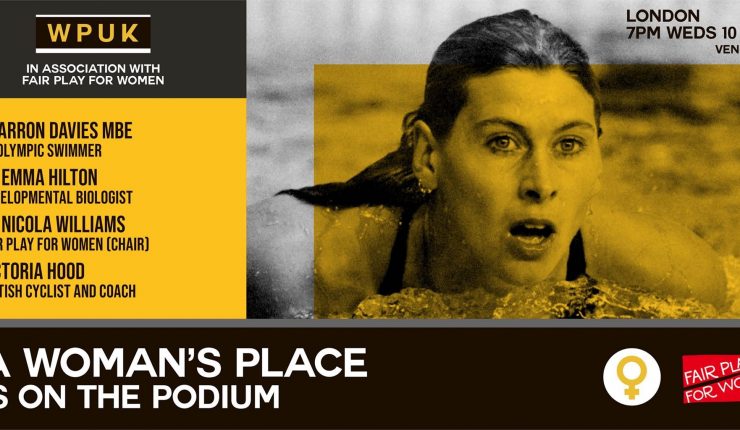 This account has been sent to us by a supporter who attended the meeting in London on 10th  July.

A hall packed with 750 women (and a handful of men, kids and babies) brimming with energy and determination to stand up for their rights and to make their voices heard is a sight to behold. Thanks to the hard work of Woman’s Place UK and Fair Play For Women volunteers, that was the sight we were treated to on Wednesday 10th July as supporters packed out the QEII Centre in Westminster to talk about the importance of women’s sport and what trans inclusion in women’s categories means for fair competition.

The gathered crowd, many of whom were surprised and relieved to recognise friends, colleagues, and acquaintances who they didn’t know would be there, had come to hear from Olympic medallist swimmer, Sharron Davies, cyclist Victoria Hood, and developmental biologist, Emma Hilton. Nic Williams of Fair Play for Women, gave an overview of the state of play in the UK. It is clear that that our sporting bodies have let women down badly.

Victoria Hood, track/road race cyclist and manager of the Jadan-Weldtite Vive le Velo women’s race team, was first up. She spoke eloquently of the challenges that she had faced as a young woman who just wanted to race with other women and the challenges she still faces trying to create opportunities for young women and girls to cycle competitively. Hood painted a picture of a sport run by men, for men, where women were disparaged (“Make way for the main event” the male competitors would say as they pushed past the women) and objectified with scantily clad pin-ups still commonplace in cycling magazines.

Next up was Emma Hilton who comprehensively demolished any prejudices members of the audience might have held that a speech by an academic would be dry or unfunny. When the Chair, Kiri Tunks, asked the audience for Emma’s twitter handle, they shouted it back – an indication of the loyal following she already enjoys. Hilton methodically and meticulously examined the scarce data that exists on the physiological changes that take place as a result of hormonal or surgical interventions and the impact these changes might have on sporting prowess. With great skill, Hilton managed to deliver a wealth of scientific data in plain English and with a good measure of humour.

She set out the incontrovertible evidence that physical differences which begin in puberty lead to males having sporting advantages compared to females for the rest of their lives; incontrovertible evidence that the International Olympics Committee has not considered in determining its policy for the inclusion of transwomen in women’s sports. In 2015, the body of information available to the IOC was a total of 5 studies, which showed that a competitive advantage over females remains after a period of transition. At elite sports levels, the difference that competitive advantage makes is enormous. Hilton pointed out that there are 9000 male athletes between Usain Bolt and Flo-Jo’s world records. To date, there is no robust scientific research to suggest that those advantages are eliminated by hormone treatments or surgical interventions undertaken by transwomen.

The audience then heard from Sharron Davies, probably the best known of the speakers. Davies, who was already a sporting icon for the nation, has attracted a new army of loyal fans who are as impressed by her dedication to women and girls’ rights as by her sporting prowess. As well as an army of fans, Davies has also attracted the attention of an army of trolls and she described her shock at the attempts to silence and intimidate her since she had spoken out about the impact of self-identification on women’s sports.

Davies was clear and compelling in her argument that women’s elite sports matters and that even a fraction of a percentage point advantage can mean the difference between standing on the podium or watching from the sidelines. Recalling losing out to Petra Schneider (who had taken performance enhancing drugs as part of an East German doping programme) at the 1980 Olympics, Davies remarked “I know what it’s like to stand next to someone on a podium who you can never beat – I don’t want a generation of female athletes to experience that now.”

Ticket holders got even more stardust than expected as messages of support from Lady Tanni Grey-Thompson and Dame Kelly Holmes were screened. It wasn’t just the women sports legends showing their solidarity; former Olympic decathlete Daley Thompson had come along to show his support too.

The event also took a look about how self-ID in sports was affecting women in other parts of the world with a specially recorded video interview with Coach Linda Blade and Dr Jen Wagner-Assali, a cyclist who lost out on a silver medal after trans cyclist, Rachael McKinnon, won gold. Wagner-Assali who, as she puts it, is an orthopaedic surgeon in her “spare time” (we all love a multi-tasking woman), had researched the sporting advantages held by trans athletes and had concluded that her gut feeling when she lost out to McKinnon was right – it wasn’t fair.

For all of the speakers, that is pretty much what it boiled down to: It just isn’t fair.

It’s not fair to the elite women athletes who lose out on their place in sporting history because transwomen have taken their rightful place on the podium.

It’s not fair on the girls who are put off even participating in sports because they can see it’s not a level playing field.

It’s not fair on the women like Victoria Hood who have dedicated their lives to building up women’s sports, creating women’s elite categories, and encouraging girls into sport, only to see their categories taken over by those who identify as women.

And it’s not fair on the women and girls who risk serious injury competing in contact sports with transwomen who retain male physical advantages. As one speaker said, “We all have the right to participate in sport but we don’t have the right to self-identify into whichever category we want”.

The meeting was a milestone. It was the product of sisterly collaboration between two different groups, Woman’s Place UK and Fair Play For Women. Both groups are made up of volunteers – dedicated women, many of whom are also juggling full-time work, motherhood, and a million other responsibilities – who worked their socks off to make this meeting happen. They say if you want a job done properly, give it to a busy woman.

The ripples of the meeting go far beyond the hall. They reach out to the sporting world, to policy makers, to the media and to an ever growing number of women around the world who are finally finding their voices.

As one of our supporters said afterwards on Twitter:

“I felt it from the time I walked into the auditorium. I’m not a lone voice, I’m one of millions. Many who can’t use their voice or make a stand, many coercively controlled and gaslighted by family, community, society and authority. Fearless, courageous women, ‘reclaiming their time’.”

Judith Green of Woman’s Place UK closed the meeting by connecting the battles of elite athletes with the battles of all women in our daily lives. She read a moving email testimony about the importance of women-only spaces and access to sport sent to WPUK in the week before the meeting.

This meeting had wonderful high profile names which drew the crowds. But this meeting, and its message, was for everyone: sex matters and women are organising to demand fair play for women and girls.

Sharron Davies took this photo from the stage with the agreement of the audience.