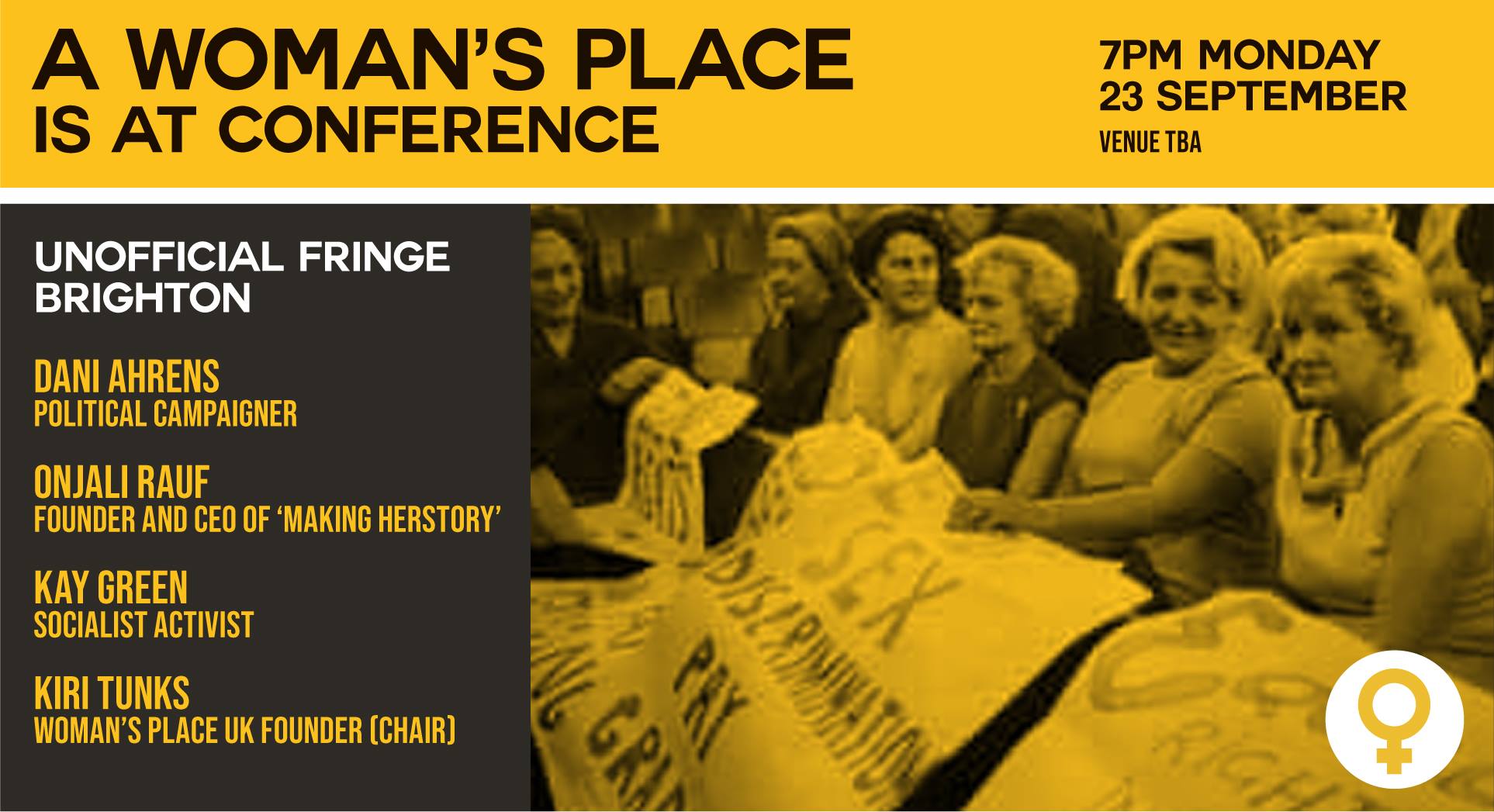 Onjali Rauf is the Founder & CEO of Making Herstory. She spoke at our meeting in Brighton on Monday 23rd September.

It is with the greatest sense of irony that I note that in 2019, when women are supposed to be breaking down ceilings and walls and breaking barriers and getting equal pay and being fairly treated and politically represented, the threat that we STILL seem to pose when we come together to speak about something as basic as our rights, is a threat of such magnitude that we need the police to protect us.

If there is any further proof needed in the world of how little women as a reality, a physical, undeniable reality, actually possess in terms of safe spaces to speak their mind, and just be, then this right here is it!

Let’s hope in the future, we can speak openly and safely, again and again and again, without the fear that seems to govern every aspect of our lives – that fear being anger, and violence, directed at us, for the sheer audacity of our existence.

I’m here tonight because I am sickened to the heart at what I perceive to be a heightened ‘othering’ of the already established ‘other’.

As a woman who isn’t white and better yet, wears a scarf on her head, believe you me, I know what it feels like to be constantly ‘othered’.

Even in spaces where I hoped I might not be.

And after nigh on three decades of trying to fit in, to be accepted as the feminist I am, to find spaces where I can just be me without having to battle another label, or another patronising stereotype, or a racist bias that has nothing to do with me, I find it shocking that now, even the space to call myself what I am – a woman, who needs the companionship, help, support, and sisterhood of other women, is also being chipped away at.

The very words ‘girl’ and ‘woman’ – the very basic but undeniable facts of my existence, my genetic make-up, my body’s functions and needs, my capacities, my limits, my possible life experiences, and the shared experiences that come with being a girl and woman first and everything else next, now seem to be sounds of disdain and disrepute.

And along with the gradual but very deliberate marking down, drowning out and silencing of those two words, are all the imperfect, too-small, too-cramped, too-labelled spaces and safety measures women have fought so hard for.

Calls to rewrite the Equality Act so as to eradicate single-sex spaces and safeguard the needs of those who wish to be accommodated in that space when they will not have the experiences, the understanding, nor the true lived experiences of being girl, or woman, is unacceptable.

Calls to begin placing pressure on children at primary level to pick a label, pick a mode of living, and pick a gender identity when most still aren’t sure what breakfast cereal they like, is beyond imagining when it comes to trying to fathom the impact such an exercise will have on little minds.

As a child who was called a tomboy for shunning Barbie dolls and anything pink and wanting to be either a Teenage Mutant Ninja Turtle or better yet, Tintin, when I grew up, I cannot imagine what the pressure of picking a ‘side’ or a label will have on the minds and feelings of generations to come.

Because unlike children today, I wasn’t told that because of what some would like to label as ‘boyish’ traits, I needed to label myself as something else.

I wasn’t told that I might need an operation to fix myself in the future because I was flouting the invisible laws of gender somehow, or that I had to tick a different box to show that my body and my mind didn’t match in accordance to an invisible society’s laws.

And to be frank, for a chubby Asian girl facing sexism and racism on all fronts already, I cannot imagine what this added layer of not-fitting-in would have done to my already young and vulnerable mind.

I was lucky enough to have parents who let me be just me – a girl who happened to want to be an astronaut, a ninja turtle and a reporter, and who didn’t like dresses or salwar kameez’s, right until she hit 21, and promptly became addicted to ball dresses.

All these labels, instead of freeing us, are simply forcing us to adhere to even stricter ideas of gender – there seems to be nothing fluid about this movement or call for gender fluidity.

Enter what I call the He-Man and She-Ra code.

In today’s world, it seems there are only two ways to be – either the hyper-masculinised He-Man, Master of the Universe, complete with bulging biceps, or She-Ra, the Princess of Power.

Are those really the two options we have?

Are we really telling ourselves that if we’d prefer to do a sword swapsie or even a unicorn swapsie and possess both traits traditionally labelled female and male, we’re not right somehow – that we can’t fit in – that our bodies are wrong somehow?

What happened to all of us being able to like what we like, and be what we want to be, and wear whatever we want to wear, so long as we’re not hurting anyone and without having to change our physical realities?

As a woman of faith – whose God, may I please remind everyone, IS genderless, I have zero problems with anyone who is anything ‘other’ than me.

Create your own space – a third space – a fifth space – a seventh space – one which caters to your own unique experiences and needs too – because you will have plenty of both that we as women won’t understand or share in too.

Or better yet, take space from the men – they have lots!

And please don’t pretend that my own experiences of transforming from girl to woman – and all the millions of tiny hurts and pains and prejudices and pushbacks all women have suffered as a result of being a girl, then woman, can be shared by you either.

As someone working with women fleeing domestic violence and war, human trafficking rings, childhood sexual abuse and a million and one other experiences of male-inflicted violence in between, our under-funded, drastically reducing, single-sex spaces are literally our last vestiges of safety.

For women who have been punched, beaten, raped, and broken at every possible level you can conceive, to be forced to accept former men as part of their healing process, will, to put it bluntly, lead to further trauma, or worse still, a distrust and turning away from the very services they believed might help them.

And I have to ask our policy makers, our parliament, and organisations like Stonewall and basically any human being with a shred of humanity: really?

Do these women’s needs and the needs of the young boys and girls they bring with them, really matter so little to you?

Aren’t they just as important as those wanting to be granted access to our worlds? And not only access – but special rules and allowances too?

As I look around in today’s world, I see more and more bewildered women and girls feeling confused, alienated and afraid.

Women like myself and my Sikh or Hindu or Jewish friends who need single-space places to safely unveil, wash up and reconfigure ourselves; or women who are breastfeeding and lactating and needing a space to let it all hang out; or women going through the menopause or chemotherapy who need safe spaces to just be looked after, or young girls on their first ever periods or sprouting breasts who need space for support and reassurance.

Or every woman ever, who needs a safe space like this to come and meet and talk about our fears and battles, and hopefully create better policies and movements for our future women.

Even the smallest annihilation of the basic right to be a woman in the presence of other women can have dire impacts on our health and state of mind.

A case in point: three weeks ago, I took a dear friend to lunch.

All was going well, we were having a beautiful time, and halfway through the meal, she left to go to the restaurant bathroom.

The woman that came back, was not the same one who left the luncheon table: for instead of the carefree, happy being I knew, came back a pale, quiet and slightly shaken version.

It transpired the restaurant had a gender ‘neutral’ bathroom, and as she had made her way down, a very innocent man had walked out of the toilets, banging into her.

Nothing of any significance to anyone watching – not until I tell you that this friend of two decades, had been raped in her university dorm room at the age of twenty, and feared all contact with men – no matter how nice, kind, friendly, non-threatening or ‘effeminate’ they might seem.

But as Greta Thunberg says, ‘Don’t listen to me. Listen to the scientists.’

The ones that tell you that no amount of surgery can eradicate the strength, the organs, the differentiating chromosomes and atoms which forge and differentiate the biological sexes.

The ones that tells us that no matter how much you want a physical body to cross over to the ‘other’ side, and how hard you work to reassign the gifts you were born with, you will still have strengths, experiences, privileges that we women will never ever have been gifted.

So if you think that it’s fair to race us and outrun us and take home the gold, and ignore our vulnerabilities, our voices, and our needs to cater to just your own, then you have chosen to ignore the very people you keep telling us you want to be and support.

And by choosing to ignore us, then perhaps the greatest irony of them all will transpire – because the very safe spaces and rights that are now being targeted to accommodate you, will simply disappear entirely.

Leaving all of us, with absolutely nothing.