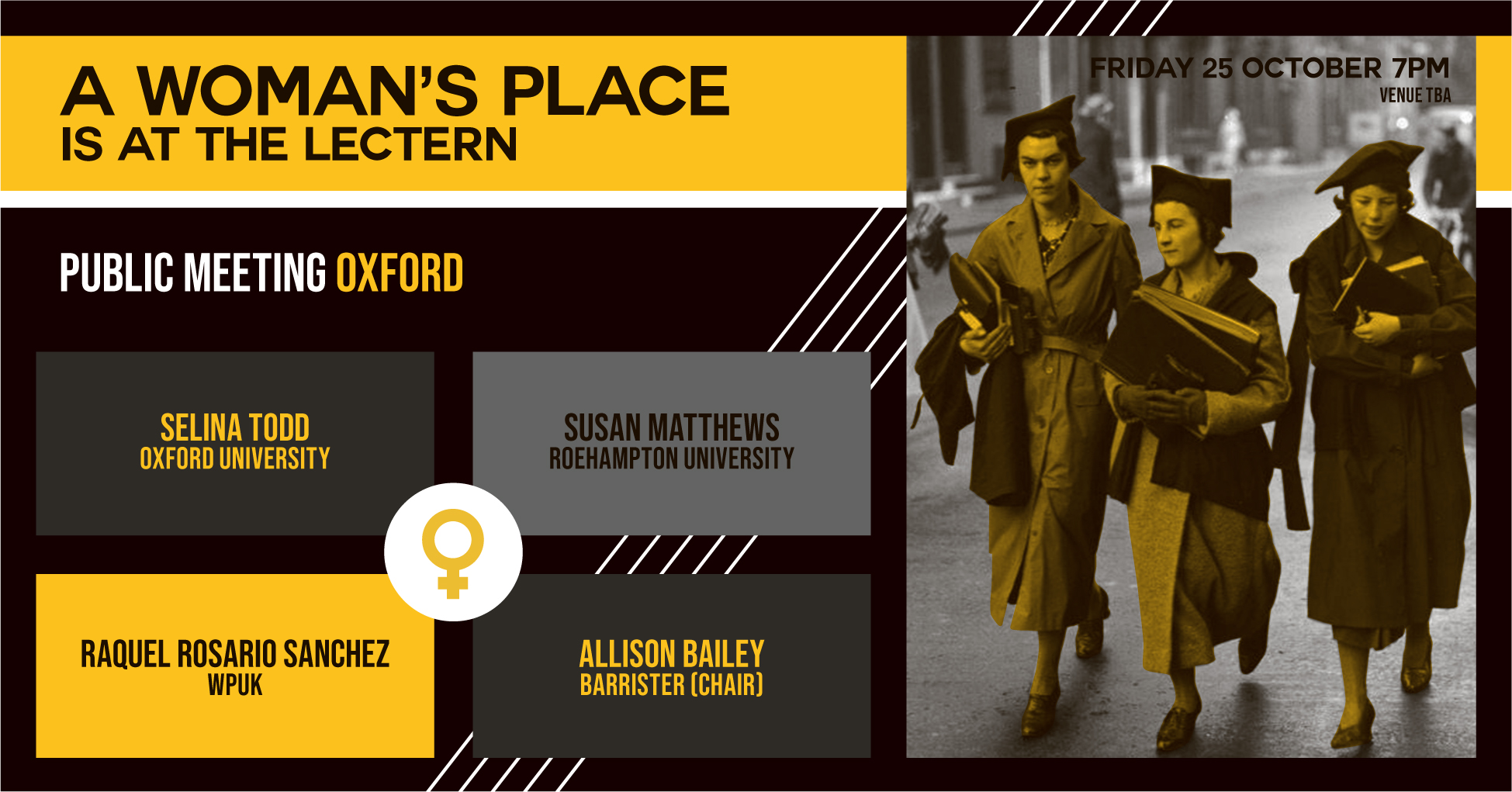 On 17th October 2019, Trans Action Oxford published an open letter attacking Woman’s Place UK and our forthcoming event, A Woman’s Place is at the lectern. This statement is full of false claims about our campaign which we believe to be defamatory.

We are therefore extremely disappointed to see signatories to this letter who cannot have done any research into what we stand for. We are sorry they have been so misled.

We do not link to documents which we believe to be defamatory but we have cut and pasted the contents of the letter (in italics) below along with a rebuttal of the claims therein.

“On the 25th October, the group ‘A Woman’s Place’ is running an event in Oxford billed as a panel on ‘academic freedom and the current issues being faced by women’. The group describes itself as a feminist organisation dedicated to supporting women’s rights.“

“In reality, it is a group whose primary aim is to erode existing rights for transgender people”

“They have also described the high suicide rates amongst trans people – almost half of trans people have attempted suicide – as a ‘myth’.”

Approximately 90 per cent of people who die by suicide have a diagnosed or undiagnosed mental health problem at the time of death.Over-simplification of the causes or perceived ‘triggers’ for a suicide can be misleading and is unlikely to reflect accurately the complexity of suicide. For example, avoid the suggestion that a single incident, such as loss of a job, relationship breakdown or bereavement, was the cause.” (Samaritans)

“‘A Woman’s Place’ was set up to oppose changes to the Gender Recognition Act which would improve trans people’s lives, and has since maintained a focus on undermining trans rights.”

We also want to be clear that this is an explorative consultation and we do not  have all the answers. That is why, as we consult, we are mindful of the need to engage with all perspectives. We particularly want to hear from women’s groups who we know have expressed some concerns about the implications of our proposals. To be clear –this consultation focuses on the Gender Recognition Act; we are not proposing to amend the Equality Act 2010 and the protections contained within it. We do realise, however, that there are concerns about interactions between the two Acts and we want to use this consultation as a way of gathering these views.”

“Current members of the group are involved in a US Supreme Court case looking to allow employment discrimination against trans people.”

“They advocate for excluding us from bathrooms and changing rooms, forcing us out of public space.”

“They also work to exclude us from rape and domestic abuse hotlines, even though trans women are just as likely as cis women to be raped, and far more likely to be domestically abused (19% vs 7.9%). In all of these actions, they make our lives harder, more precarious, and more dangerous.”

“Trans people already face a disproportionate level of violence, discrimination and hardship. The Trans Report 2018 found that 98% of trans students at the University of Oxford had experienced mental health problems. Nearly two-thirds had experienced transphobia or discrimination within the University. There is a direct correlation between the proliferation of groups like ‘A Woman’s Place’ and the rise in transphobic abuse in the UK.”

“In the last year alone, hate crimes against trans people have gone up by 81%. Their rhetoric and ideas are not simply a matter of ‘academic debate’; they have tragic, real-life consequences for us.”

“Unlike ‘A Woman’s Place’, we are deeply invested in academic freedom.”

“A proper commitment to academic freedom uplifts voices from all marginalised groups, including those of trans people. It recognises that freedom of expression does not extend to bigotry, and that bigotry serves to silence the vulnerable. It affirms the validity of trans voices, trans perspectives, and trans experience. Above all, academic freedom must ensure that trans students, academics, and members of staff have the freedom to study and work in an environment free from discrimination and violence.”

“We are frustrated that groups such as ‘A Woman’s Place’ insist upon their own academic freedom, but do not extend this principle to trans people.”

“Members of the group have prestigious academic positions and widespread respect, while trans voices are consistently pushed to the edges of discourse.”

“Our decision to hold a demonstration of solidarity was rooted in these concerns. Rather than directly protest their event, and thus play into their narrative of false victimhood, we are looking to re-centre trans voices, and to discuss trans issues alongside cis allies in a respectful and tolerant manner.”

“‘A Woman’s Place’ is once again hoping to spread transphobic ideology in our city.”

“We hope you will join us in demonstrating that their hateful views and the violence they inspire have no place in Oxford.”

The attitude of groups like Trans Action Oxford smacks of misogyny.

We are calling it out.