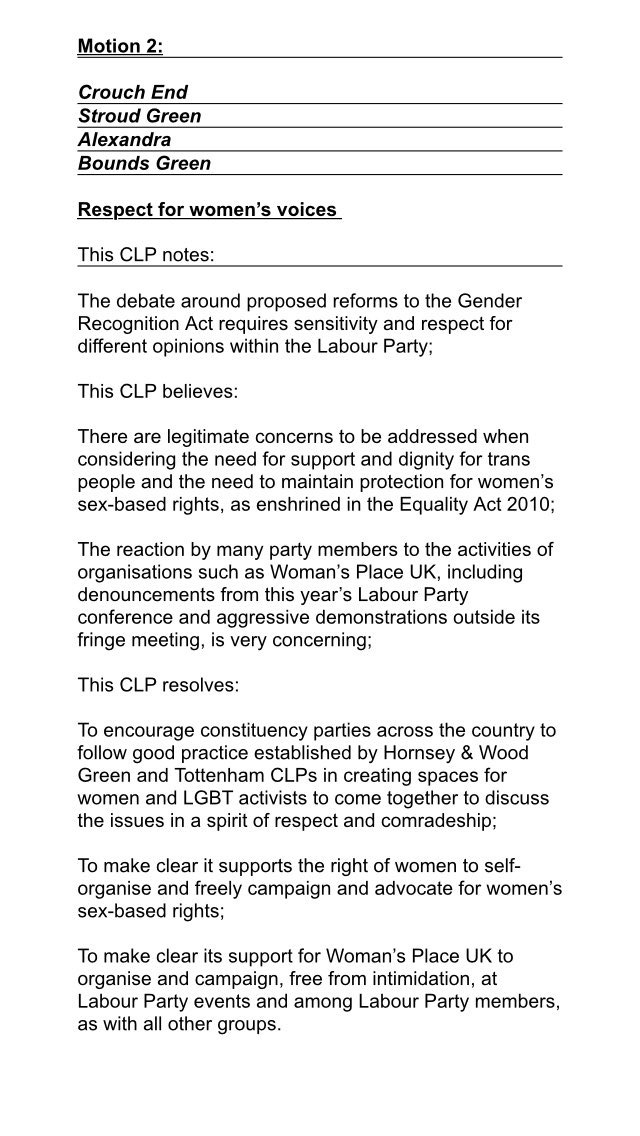 An open letter is circulating condemning a motion passed by the largest Constituency Labour Party (CLP) in the country, Hornsey & Wood Green.

We believe the open letter to be misguided, misleading and likely to cause unnecessary anxiety and concern.

We also believe the letter to be defamatory so we are not linking to the document itself. However, in the interests of transparency, we have copied the text below (in italics) followed by our points of rebuttal.

We have also reproduced the text of the motion so that readers can decide for themselves if the concerns raised in the open letter are justified.

We are members of the Labour Party expressing solidarity with trans people in the face of hate from the media and by anti-trans groups in the UK. We recognise that the UK has recently experienced a week  of coordinated pernicious attacks on trans people, including the launching of the execrable LGB Alliance and a motion passed at Hornsey & Wood Green General Meeting in support of Womans (sic) Place UK.

The debate around proposed reforms to the Gender Recognition Act requires sensitivity and respect for different opinions within the Labour Party.

There are legitimate concerns to be addressed when considering the need for support and dignity for trans people and the need to maintain protection for women’s sex-based rights, as enshrined in the Equality Act 2010.

The reaction by many party members to the activities of organisations such as Woman’s Place UK, including denouncements from this year’s Labour Party conference and aggressive demonstrations outside the fringe meeting, is very concerning.

To encourage constituency parties across the country to follow good practice established by Hornsey & Wood Green and Tottenham CLPs in creating spaces for women and LGBT activists to come together to discuss the issues in a spirit of respect and comradeship.

To make clear it supports the right of women to self-organise and freely campaign and advocate for women’s sex-based rights.

To make clear its support for Woman’s Place UK to organise and campaign, free from intimidation, at Labour Party events and among Labour Party members, as with all other groups.”

The failure of the Labour Party on this issue is a deep wound to the principles of equality the Party is supposed to stand for.

Let us be under no illusions. The motion passed at Hornsey & Wood Green supports a transphobic organisation.

Links in the open letter:

Failure of the General Secretary’s office to rule the motion out of order in the first place is hard to comprehend but to still have failed to intervene to rule it out now that it has received some publicity and is going to Tottenham CLP is unconscionable.

Our confidence in the Labour Party’s commitment to protect trans members is shaken. Action must be taken.