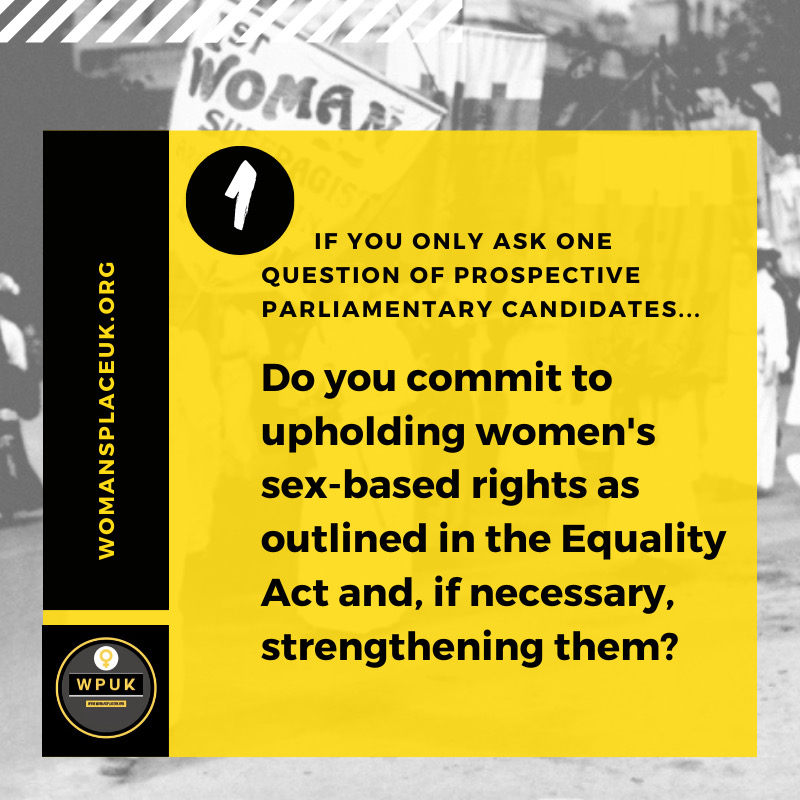 We started this campaign to ensure that women’s voices were heard in the consultation on the Gender Recognition Act (GRA) We were concerned about the impact of any change in the law on rights women hold under the Equality Act including the single sex exemptions.

We had five original demands which related to upholding these rights:

The debate around the GRA exposed the poor state of women’s rights in the UK and in January 2019 we resolved to develop a broader campaign based on our New Year Resolutions. We went on to publish our manifesto for women’s rights in May 2019. It outlined specific actions that we want politicians to take to address the oppression and discrimination faced by women and girls.

This week the major political parties are publishing their manifestos for the General Election. We are analysing the promises being made in relation to women’s rights and how these promises compare to our own manifesto for women’s rights published in January 2019.

So far, both the Liberal Democrats and Labour have restated their committed to reform of the GRA.

The Liberal Democrats commit to:

“Complete reform of the Gender Recognition Act to remove the requirement for medical reports, scrap the fee and recognise non-binary gender identities.”

We believe any proposals to change the Gender Recognition Act should only be made after proper consideration of all submissions to the consultation which closed on 21 October 2018. Such a law change must be subject to an Equality Impact Assessment to ensure that any changes do not infringe the rights of others especially those with legally protected characteristics.

On the question of the Equality Act and the single sex exemptions, Labour has made this commitment:

“Ensure that the single-sex-based exemptions contained in the Equality Act 2010 are understood and fully enforced in service provision.”

“We will end mixed-sex wards.”

It is not yet clear how this commitment will dovetail with Labour’s proposal on the GRA but we are heartened by Labour’s demonstration that it is listening to women and understands how important these sex based rights are for women.

We will be looking at the manifestos of the three parties fielding candidates throughout the UK – Labour, the Liberal Democrats and the Conservatives – and comparing their promises to our manifesto demands for women’s rights.

We plan to publish these comparisons in the next few days so that you can decide for yourself which party is going to do more for women.