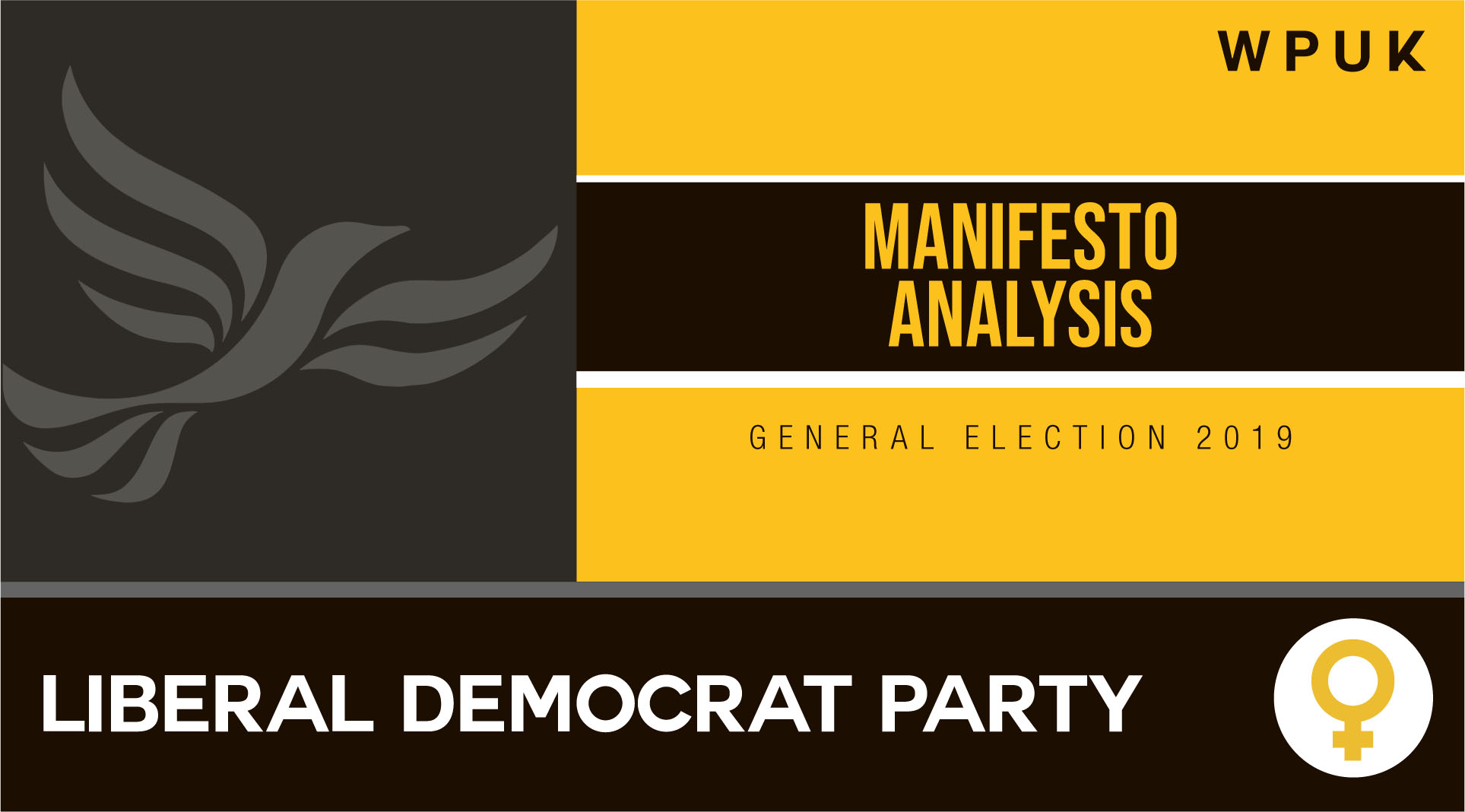 We have looked at the proposals made by the Liberal Democrats in their 2019 General Election manifesto.

We have mapped, as best we can, the proposals they have made against the demands we are making in our manifesto for women’s rights. Please check the Liberal Democrat manifesto itself for more details.

We will do the same for Labour and the Conservatives.

* We originally stated it was 5 but we have checked and found 3 more references.

2. Does the manifesto commit to upholding the single sex exemptions in the Equality Act?

3. What does the manifesto say about reforming the Gender Recognition Act?

We believe any proposals to change the Gender Recognition Act should only be made after proper consideration of all submissions to the consultation which closed on 21 October 2018. Such a law change must be subject to an Equality Impact Assessment to ensure that any changes do not infringe the rights of others especially those with legally protected characteristics.

We are opposed to the removal of the ‘spousal veto’ which is more correctly entitled ‘spousal consent’. This proviso protects the right of a spouse to leave a marriage if her/his partner decides to transition to another gender. Read our statement on spousal consent .

We support the removal of the ‘Tampon Tax’ and any other taxes which are unfairly placed on products bought by women and girls.

We believe that poverty is the key factor in women’s lower economic status and this is best tackled by challenging the structural inequalities faced by women rather than tackling the symptoms. Women’s suffer disproportionately from poverty in all its manifestations.

Other proposals not covered by WPUK manifesto

Whilst agreeing that students should not be limited by sex in which items of school uniform they should wear, we believe that students, families and carers should be consulted in any changes to a school’s uniform policy and the wishes  and needs of all students must be taken into account.

We welcome the Liberal Democrats’ commitment to tackling unconscious bias and to developing a plan to plan to address BAME inequalities. We are also pleased to see a commitment to challenging gender stereotyping in schools.

We believe, however, that a policy that tells children who don’t conform to gender stereotypes that they can identify as the opposite sex runs completely contrary to the commitment to challenging gender stereotyping. We also feel that allowing boys who identify as girls to take part in girls’ sporting activities will act as a deterrent to girls taking part in sport. Furthermore, allowing boys who identify as girls to use girls’ toilets and changing rooms undermines girls’ right to privacy and could be distressing to many girls, particularly those with religious objections to mixed-sex changing areas.

Our analysis of other party manifestos

Not so liberal, no so democratic: the Liberal Democrats and Women

Spousal Consent and the Liberal Democrats