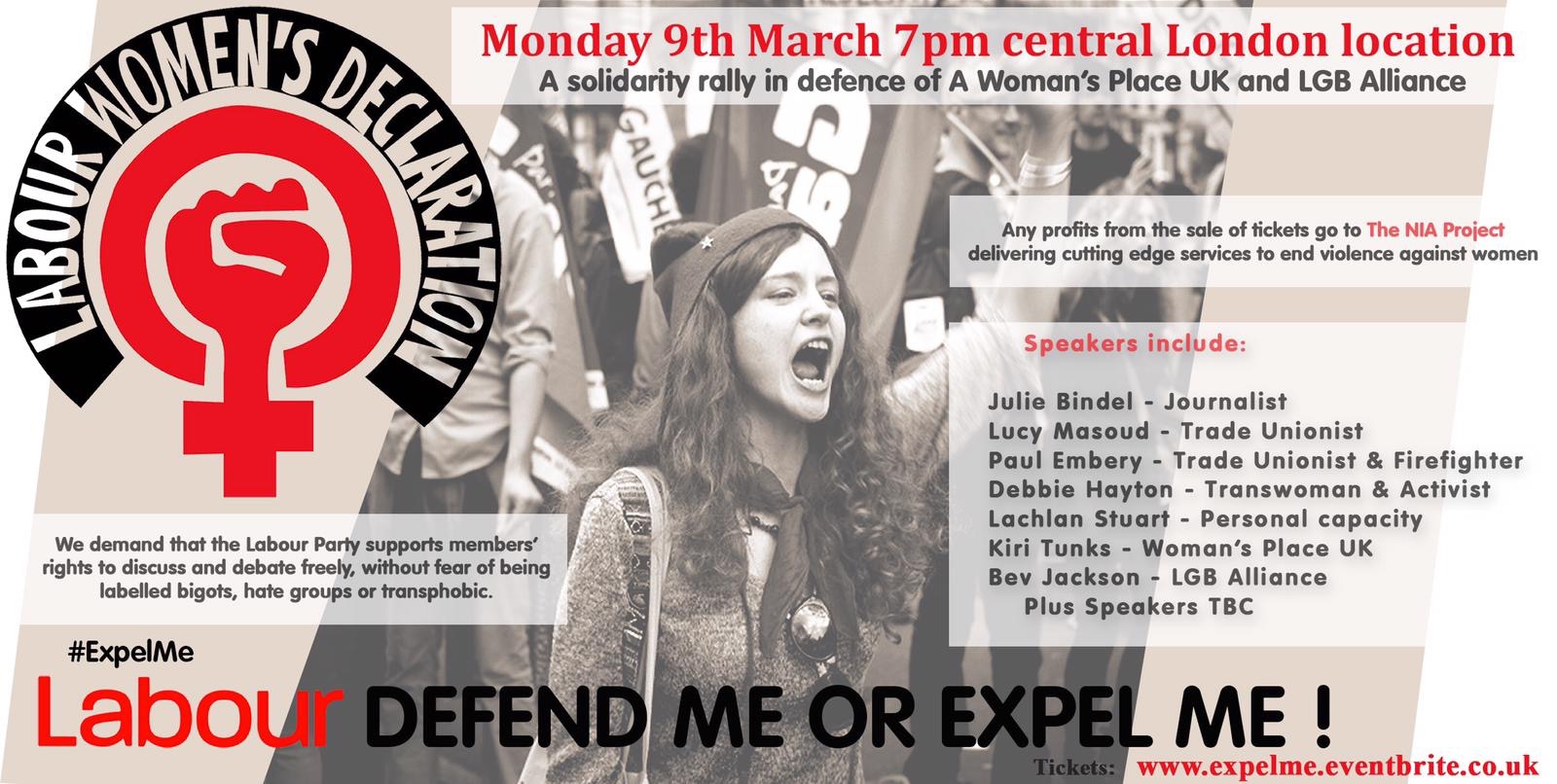 On Monday night, we spoke at the #ExpelMe rally organised by Labour Women’s Declaration in support of Woman’s Place UK and LGB Alliance. You can read the speech by our co-founder Kiri Tunks here.

This was in response to a scurrilous pledge circulated by a group calling itself Labour Campaign for Trans rights which included two points referring to Woman’s Place UK and LGB Alliance which we believe to be defamatory:

9. Organise and fight against transphobic organisations such as Woman’s Place UK, LGB Alliance and other trans-exclusionist hate groups.

10. Support the expulsion from the Labour Party of those who express bigoted, transphobic views.

The pledge has been signed by several Labour leadership and deputy leadership candidates. Those who have signed have continued to state their support for the pledge despite being challenged on a wide range of media platforms and many Labour members and supporters including the mainstream press, national TV and local and national radio.

Read our statement on the pledge.

Read an anonymous letter from a labour supporter to Rebecca Long Bailey.

We are deeply grateful to Labour Women’s Declaration, all the speakers and everyone who attended the rally for their support and solidarity. We are heartened to know that there are courageous and principled people within the labour movement who are prepared to stand up for the democratic rights of women and the right to respectful debate.

The #ExpelMe rally on Monday night was picketed by around 60 aggressive protestors who intimidated attendees as they arrived, taking pictures and obstructing the entrance; most took part in loud and abusive chanting; many were masked or had scarves over their faces; some threw smoke bombs and lit flares. This was not a peaceful protest. It was designed to create fear and panic.

We support the right to protest but too often protests outside our meetings have crossed a line into aggression and threat. The fact that this aggressive and threatening protest took place by the Wall of Truth Maxilla Space in the shadow of Grenfell Tower exposed the narcissistic attitudes of the protestors who treated with contempt residents who challenged them about their actions. Of course, the smell of smoke caused consternation for those inside the meeting but it also showed a deep disrespect to a community still mourning its dead as well as causing distress to local residents.

We were pleased to see the apology from the group that organised the protest but are astonished that they did not extend that apology to the people peacefully attending the meeting or understand that throwing smoke bombs and physical intimidation cannot be considered a peaceful protest.

We formed to ensure that women’s voices are heard and their rights upheld. Yet nearly every one of our meetings has been subject to intimidation or threat. You can read a record of all our meetings here.

Despite this, very few public figures or political representatives have spoken out to condemn this aggression, including those in the labour and trade union movements.

We are sickened by the dismissive way in which such people lecture women to be kind and patient and to consider the rights of other people while staying silent as women get abused and attacked.

We call on all Labour leadership candidates and labour movement leaders to condemn the aggressive and disrespectful attack on the Labour Women’s Declaration rally.

We also support the four demands by Labour Women’s Declaration made at the #ExpelMe Rally:

We would encourage everyone to sign the Labour Women’s Declaration petition.

There are also other petitions organised by activists in other political parties:

Please also sign this petition created by Women Uniting (representing all six of the political party pledges) calling for a commitment to women’s sex-based rights.