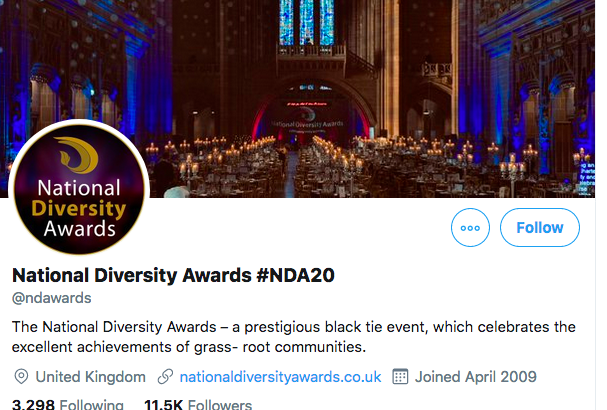 On Tuesday 21st February 2020, we were surprised and delighted to find that Woman’s Place UK had been nominated for something called the National Diversity Awards.

Congratulations! You have just been nominated for the Community Organisation (Gender) award at the National Diversity Awards!

The National Diversity Awards event is:

a prestigious black tie event celebrating the outstanding achievements of diverse heroes and life changing charities for their exceptional fight against inequality.

We were honoured that someone had thought to nominate us.

We started dusting off our black ties.

We were invited to accept the nomination and to create a profile page.

In the meantime, why not create a profile page so others wishing to nominate you can find you! Please click the link below to confirm you accept this nomination.

We clicked on the link but the link did not work and the password we had been given was rejected.

We tried again on a different computer. The codes still did not work.

On Saturday, 25th February 2020 we emailed the National Diversity Awards:

Thanks for this. What a lovely surprise.

We have tried to register with the password you have given us but we get a message saying ‘incorrect password’.

There was no response.

On Tuesday 4th March, we tried to log in again, unsuccessfully, and decided to register a ‘forgotten password’ to see if that would elicit a response.

We received an email in response from the National Diversity Awards:

Sorry but we could not find any nominations listed for that email address.

Please try contacting us for help.

We had, of course, already tried emailing the National Diversity Awards team to ask for help but had received no response.

We tried again. We emailed and outlined the steps we had taken and asked for clarification.

We received another email:

Many thanks for your email and apologies for any inconvenience.

Unfortunately, upon confirming your nomination, we received a number of complaints which are currently being investigated by our advisory panel.

During the nomination process, it is our obligation to review any issues raised and we are committed to ensuring our nominees values align with the inclusive ethos of The National Diversity Awards.

Once our advisory panel have completed their investigation we will be in touch.

Thank you for your understanding.

Given that we had not completed our public profile page, we wondered where “a number of complaints” could have originated from.

We were also astonished that the National Diversity Awards had only informed us that our nomination had been rescinded when we approached them for an explanation.

The National Diversity Awards gave us no information on the complaints nor did they offer us any opportunity to make representation to the “advisory panel”.

Thank you for your email.

It is pretty discourteous not to alert us to the rescinding of our nomination.

Please let us know what the nature and substance of these complaints are and how we can be make a representation to the panel.

We look forward to hearing from you by midday on Friday.

We had no response.

The person who nominated us wrote to ask for an explanation. She received no response either.

We took no further action. The Coronavirus has meant that we have been distracted with other responsibilities.

In the meantime, we have still had no response. We have had no communication from the National Diversity Awards “advisory panel” about their investigation.

The National Diversity Awards lists the following categories as being eligible for recognition:

There is no mention of sex despite sex being a protected characteristic under the Equality Act 2010.

There is no mention of sex despite sex being the basis of women’s oppression.

All that glitters is not gold.

We are an organisation that is committed to campaigning for women’s sex-based rights. It is clear that National Diversity Awards has little understanding of feminist campaigning or of ‘sex’ as a protected characteristic of the EA 2010. This makes their award meaningless to women and a celebration of a singular, patriarchal notion of diversity, exclusive of women’s struggles.

It also seems clear that the National Diversity Awards does not believe that we deserve the courtesy of a response, let alone an explanation or a fair hearing.

We are already in receipt of the prestigious Emma Humphreys Memorial Prize for our work and it is an award we are proud and honoured to hold. You can read the acceptance speech made on behalf of WPUK by Judith Green here.

The Emma Humphreys Memorial Prize is awarded to campaigners who work to end male violence and it is judged by esteemed women working in the field in honour of Emma Humphreys:

Emma was a writer, campaigner and survivor of male violence who fought an historic struggle to overturn a murder conviction in 1995, supported by Justice for Women and other feminist campaigners. The annual prize of £1,000 is awarded to an individual woman who has, through writing or campaigning, raised awareness of violence against women and children. Alongside the individual prize, the Emma Humphreys Memorial Prize judges choose the recipient of a group award, established to recognise the unsung work done by many women’s groups and organisations. This award marks the outstanding contribution of women’s organisations who work in this embattled area and whose creativity and resourcefulness have resulted in developments that combat the prevalence of male violence. Starting in 2009, a prize is also awarded every two years to an international women’s group. The awards aim to provide recognition for work against violence and to bring it to the attention of a wider public

It is safe to say that we won’t be attending the National Diversity Awards in Liverpool in November.

But we very much look forward to attending the Emma Humphreys Memorial Prize Awards which also take place in November instead. There we will celebrate the achievements of brave and compassionate women whose work and campaigning changes lives but is routinely ignored and sidelined by higher profile events.

We hope to see you there.