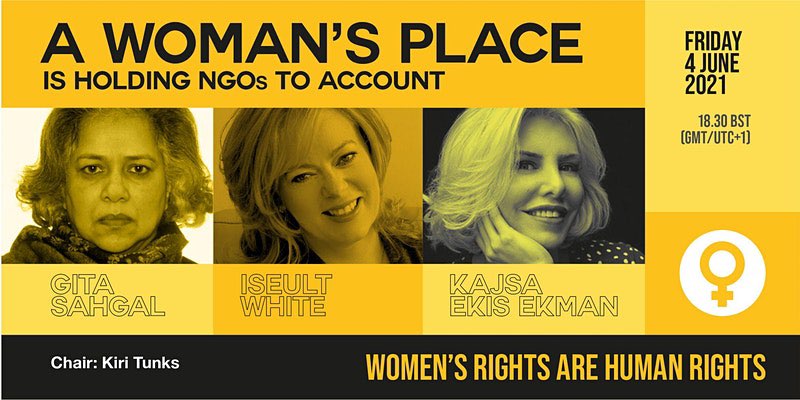 Women’s rights are human rights: and yet, in the past few years, the best-known NGO defending human rights, Amnesty International, has adopted policies that are actively harmful to women.

On June 4, WPUK hosted three outstanding speakers to talk about why this has happened – and what we can do to tackle it.

Iseult White has unique credentials for holding Amnesty to account: her grandfather, Sean McBride, was a co-founder and its first chair in the early 1960s. In 2020, Iseult publicly criticised a letter Amnesty Ireland had co-signed that called on media and politicians to stop providing “legitimate representation” for people with “bigoted beliefs” – by which they meant feminists who believe sex is a binary. It was, she said, a “completely abhorrent” attack on freedom of expression.

But it’s not easy holding an NGO to account, Iseult said. They have a lot of public goodwill, and, as cheap service providers, often have symbiotic relationships with government. If criticised, they will “scapegoat and victimise” anyone who gets in their way. Because transnational NGOs such as Amnesty International aren’t subject to national regulators, the best approach is to look for a “chink in their armour”, such as whether they are in breach of their service level agreements with providers. In Ireland, her own criticisms of Amnesty drew a lot of support because her focus was on the “constant narrowing of acceptable speech.” The most effective way to hold NGOs to account, however, was to create “new grassroots organisations like WPUK and LGBA and find targets that can be campaigned on.”

Journalist, film-maker and human rights campaigner Gita Sahgal explained that she was removed from her job as head of Amnesty International’s gender unit in 2010 after she publicly raised concerns about the organisation’s position on jihad. Amnesty’s acting secretary general Claudio Cordone claimed that defensive jihad – an ideology that has justified  mass rape, sexual slavery, and the burning of Yazidi women  –“was not antithetical to human rights”.

“Studied ignorance of the violent incitement is a key part of the poisoned process of policy making,” Gita said. Cordone’s admission that Amnesty had no problem with the key ideology of Al Qaeda was therefore “a success of accountability.”

Amnesty International has frozen out “secular advocates, ex-Muslims and anyone who challenged this warped but dominant version of human rights,” and ignored atrocities committed by non-state actors, who are responsible for the majority of assaults on women.  Gita noted that within human rights organisations, the same people are simultaneously exalting fundamentalist Islam and promoting queer theory, both of which are used to attack women’s rights.

Like Iseult, Gita argued that the alternative was to set up our own women’s rights organisations, such as her own campaign One Law for All, which fights against the existence of sharia courts in the UK and works to make sure that Muslim women can access their rights.

NGOs, said Swedish journalist and activist Kajsa Ekis Ekman, have a reputation for being the “good guys” – and that is why they are so susceptible to being taken over by vested interests such as the sex industry. This has resulted in NGO money intended for HIV/AIDS prevention in India ending up in the hands of pro-prostitution organisations.

In 2015, after “intense lobbying”, Amnesty International adopted a policy of legalising the purchase of sex – “a formidable gift to the sex industry”. One of the groups consulted by Amnesty was the National Network of Sex Work Projects, whose vice-president, Alejandra Gil, was sentenced in Mexico to 15 years in jail for sex trafficking. The Norwegian section of Amnesty has campaigned against the country’s law criminalising the purchase of sex by misrepresenting the evidence, claiming that the law puts prostituted women in danger. But, as Kajsa pointed out, in Sweden, which has a similar law, there has not been a single murder of a prostituted woman by a buyer or a pimp since the mid-1980s.

While we should continue to criticise NGOs publicly, Kajsa argued that we can also fight from within: “Just as some people who are antithetical to women’s rights have joined the NGOs, we can join them as well to change from the inside.”