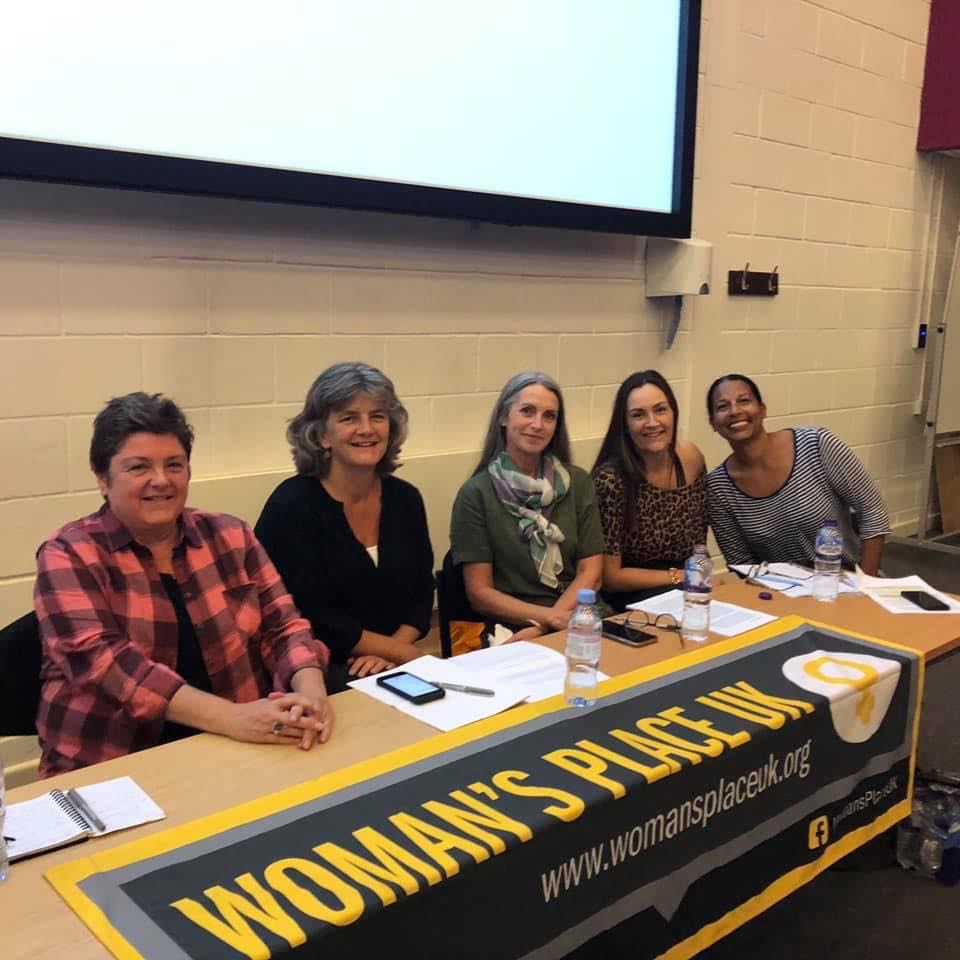 This is the text of a speech given by Dr Shonagh Dillon, at our meeting co-hosted by Portsmouth University on Thursday 16th September 2021, A Woman’s Place is asking big questions.

My doctoral thesis researches the clash between transgender ideology and women’s sex-based rights analysing the direct impact on the male violence against women sector. The title of my thesis is ‘TERF Bigot Transphobe – We Found the Witch. Burn Her’. Well, that is the short version anyway. The longer academic version is – I am reliably informed by a man on twitter – verbose.

I interviewed 31 participants in total, 15 adults who were pro self-ID and 16 feminist women who were against gender reform. I combined this with online ethnographic research from the social media platform Twitter.

In terms of single sex spaces for female victims, even participants I interviewed who were pro gender reform and pro self-ID did not agree to a blanket acceptance of transwomen in female-only male violence against women spaces. In total, 87% of participants felt it important to provide and retain female-only spaces. In offering solutions, 93% of participants felt that transgender victims should be afforded their own specialist safe spaces to support their needs when they have experienced domestic abuse or sexual violence.

All the feminist participants were keen to make sure that transgender victims were supported and they were all clear about making sure that nobody was ever hurt or discriminated against. They just asserted that supporting transwomen did not have to equate to supporting them in the same spaces as women.

The silencing of women on the frontline in domestic abuse sector

I think the response to speaking up and speaking out about protecting single sex spaces for women subjected to male violence is perhaps the more telling finding. Ninety nine per cent of participants who worked on the frontline in domestic abuse organisations felt they had been silenced in the past, or are still being silenced, due to fears relating to the commissioning landscape and losing funding for already cash-stripped services. Participants who had not spoken out were terrified of being called transphobic or bigoted if they raised questions about the impact of self ID on women.

But it should be noted that even though these women weren’t public they were brave enough to take part in my doctoral research and that is a lesson to those who don’t understand how women work or how feminism works: women will get their voices heard one way or another.

The fear of the loss of funding is a valid one. We have seen services which want to retain a ‘by women, for women’ approach being defunded in both Scotland and England. From personal experience, I know that supposed trans rights activists have tagged in funders and commissioners who fund Aurora, the anti-male violence charity I am CEO of. It matters not to these activists that they attack projects that are accessible to people who identify as transgender, alongside projects that retain single sex spaces for women. Nothing but total capitulation to their demands will suffice.

The cost of speaking out

For the participants who had spoken out around gender reform, they had all experienced targeted attacks, name calling, and threats: These included:

The correlation with the modern-day witch did not go unnoticed by participants, the degradation, the shaming, the application of social media providing the witch finders the perfect digital ducking stool to make an example of these women and send a stark warning to anyone else who dares to raise her voice!

Although I have had backlash before, the response since publishing my research has been more organised and targeted. This is really something to think about for me, given my professional background.

The scenarios in which women experience silencing when they are being abused by men are too many too count.

The scenarios in which women in this debate are told to shut up, sit down, fuck off and die TERF scum, the resounding feeling in our guts, we know this feeling, we remember it, we have done this before. It is a well-worn path and for many of us it is all too familiar.

The tweets directed at me in the recent targeted harassment are no different to the men in my past who have sent me text messages or contacted me in late-night phone calls or reminded me of their physicality when they beat me to the floor, stick a boot in my face and tell me through spitting teeth, that I am a piece of fucking scum.

The in-real-life approach that my colleagues experienced from one man were sinister, but not a surprise either. The fact that he thought it was fine to approach them whilst they were working in a public space trying to engage victims and survivors in services and demand to know whether they knew I was (after his analysis of my tweets) “transphobic” – was clear message back to me that he was watching me, and he wanted them to know that they could be smeared just as easily by association. But research evidences that stalkers will aim to recruit and approach at least 21 people around their victim and it won’t be the first time a male stranger has stalked my twitter or sought me out through work. Men who abuse women really do hate the women that support them.

These events are entirely predictable. The man who approached my colleagues clearly wanted to intimidate them into silence and shame them in some way for associating with the witch. He clearly hadn’t ever met my team if he thought his tactics would work. It’s interesting to me though, lots of male perpetrators seek to destroy a victim’s reputation and isolate her from her friends or family, or make their victim too difficult to be around so that eventually her support network disavows and deserts her…

I do not share my experiences for pity, they are in no means unique, nor are they by any stretch the worst that women experienced within this debate, in fact they are very mild. I merely highlight these tactics, this evidence, this behaviour that you can all see, that is out there every day being witnessed against women like the participants I spoke to, the wonderful brave women I share this platform with. Women like Karen Ingala Smith who in terms of my movement stood entirely alone for many years and deserves huge respect for doing so, or the great swathes of women who are watching and are too frightened to speak yet.

This is male violence, and this is the reason why single sex spaces for female victims are so important.

I invite you to think about these attacks on women in this debate and then times that abuse by 1000 in the context of what women experience from men in their homes; men who say they love them, men they have left in the past but still hunt them down, men in clubs, or pubs who sexually violate them, men who exploit them and prostitute them. When those women access our services, they deserve that simple yet precious right to have a male free space to heal.

It is my view that these misogynists, the online and in real life bullies are not interested in what victims need, whether they are women or they identify as transgender. They want to push against women’s rights and shift our boundaries, like men have done for millennia they want women to concede on hard fought for spaces. As one of the participants in my research said, “if this is a backlash, it is the worst I have ever seen.”

The need for academic freedom

Before I close, I want to return to the academic context and the reason we are all here. In terms of the academic perspective, this is another interesting space where fears grow amongst professionals, and smears take hold. After all, a lie is halfway around the world before the truth has got its boots on, and associations with the heretics are to be avoided at all costs.

But I had a good experience, particularly because of my first supervisor who taught me exactly what academic freedom means. The fact that Portsmouth University allowed me a space to do my research and are not afraid to host a series of seminars to discuss difficult questions, on which none of us will all agree, is something for which I am incredibly grateful, and they should be applauded for.

Academia is exactly the place we should be having these discussions. Disagreements and debate are vital. It is important to remember that some academics are feminists, some researchers are also practitioners and activists with decades of experience working within the field they choose to research. Some academics believe the rights and spaces of women and girls subjected to male violence should be protected.

A message to the misogynists

So, I have a message to the misogynists and their allies, the harassers who are desperate to silence me.

My name is Dr Shonagh Dillon. I am that feminist academic; I am that activist; that practitioner researcher. I believe that the rights and spaces of women and girls subjected to male violence should be protected.

My fellow sisters and I have years of experience of your tactics, and we are still here holding the line for women – let me make it abundantly clear for those who haven’t noticed yet, from John O’ Groats to good old Pompey – Women Won’t Wheesht!