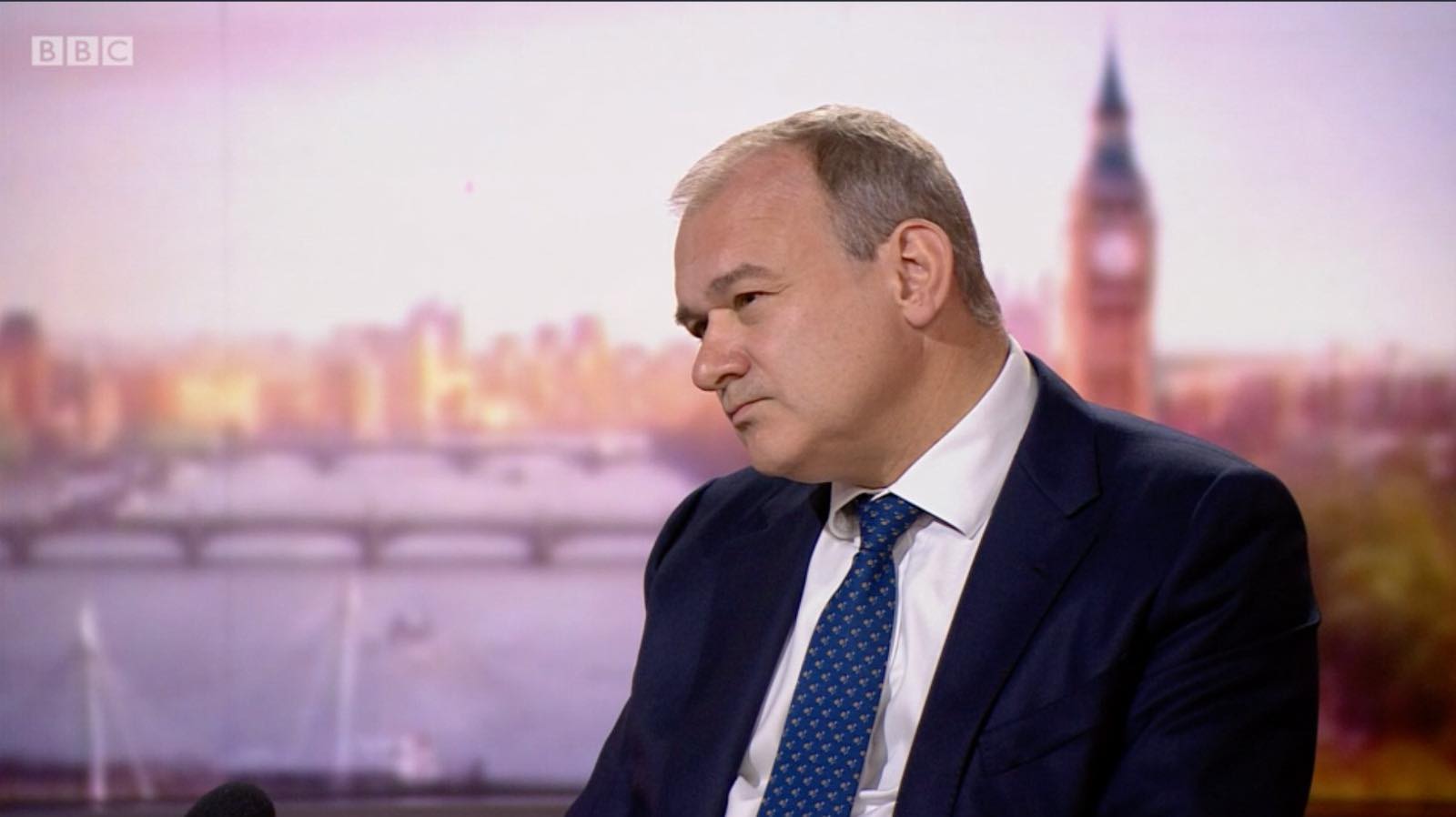 On the Andrew Marr Show on Sunday 19th September 2021, the leader of the Liberal Democrats was asked what is wrong with the phrase ‘adult human female’?

Andrew Marr: Let’s try something else. Let’s talk about free speech. What is wrong with this phrase: ‘woman – adult human female’.

Ed Davey: Well, Liberal Democrats believe that trans rights are really important because trans people are some of the most discriminated against in our society today. Huge health problems, high suicide rate and I think everybody ought to worry about that. The real issue, I think, is the toxification of the debate. There was a time…

AM: What’s wrong with that phrase? ‘Woman – adult human female’.

ED: I’ve made it clear what our position is on trans rights. No-one can criticise me for that. What I’m concerned about is on this issue, we have been working cross party in the past. I’ve worked with Conservative MPs who agree with me, Labour MPs who agree with me. What’s changed is Boris Johnson coming to No.10. Boris Johnson has toxified this debate. He set up a culture war unit in No.10…

ED: Well, I mean, you…the phrase doesn’t actually really encapsulate the debate to be honest. That’s what’s the problem with it. The issue that we have been really clear is that a trans woman is a woman, a trans man is a man and that is the issue that we’re fighting on. We believe trans rights are human rights but I do take you back to Boris Johnson because there was a time, let’s face it…I mean let’s be honest, Andrew, these are difficult issues for many people. There needs to be an open…

AM: I’m trying to keep off Boris Johnson at the moment and onto Ed Davey and the Liberal Democrats. Because the reason I keep using that phrase as I’m sure you know is that one of your members, Natalie Bird, has been banned from standing as a Liberal Democrat in any circumstances for ten years because she wore a T-shirt which had that slogan on it.

ED: Well, we have a complaints issues which I’m not part of, they’re totally independent so I can’t comment on an individual case. What I can say…

AM: That is true, what I’ve just told you. That is true and, you know, the Liberal Democrats used to be a tolerant, open party, keen for debate and keen above all for free speech. Now, you disagree with Natalie Bird, she disagrees with you but with that single phrase she has been cast out of your party. That’s not liberal, is it?

ED: Well, we absolutely believe in free speech. But we also believe that we need to protect human rights and we believe in equality. And the reason I do keep coming back to Boris Johnson – and I make no apologies for that – is because Liberal Democrats have been working with other parties, people in the Conservative party and Labour party who share our view and when Boris Johnson came that cross party working ended and I think that’s really a shame because he’s trying to divide people. We should be bringing people together.

AM: I’m particularly interested in your views in this interview for obvious reasons. Do you think that in everywhere in society and  I’m thinking of toilets, prisons, refuges, hospitals wards should be open to everybody regardless of sex?

ED: Well, if you’re a trans man, you should be able to operate as a man.

AM: So the answer is yes to that question?

ED: Yes, I mean, we’ve made it very clear and what we’re concerned about is there does need to be a debate in wider society and that debate is not being had because of Boris Johnson’s failure to lead.

AM: So to be absolutely clear: if you don’t agree with the statement that all spaces should be open to everyone regardless of sex, don’t vote Liberal Democrat?

ED: Well, no because there are many reasons why people vote for different parties. We’re talking in our conference today about the need to deal with the Covid crisis, particularly for children and young people. We want to give parents power so we catch up on the lost learning. We want to look after carers, we want to tackle the climate crisis, we want to look after small businesses, so… I’m sorry, Andrew, when people vote, there’s a whole set of issues they vote for.

Not so liberal, not so democratic, WPUK statement on the Liberal Democrats, November 2019