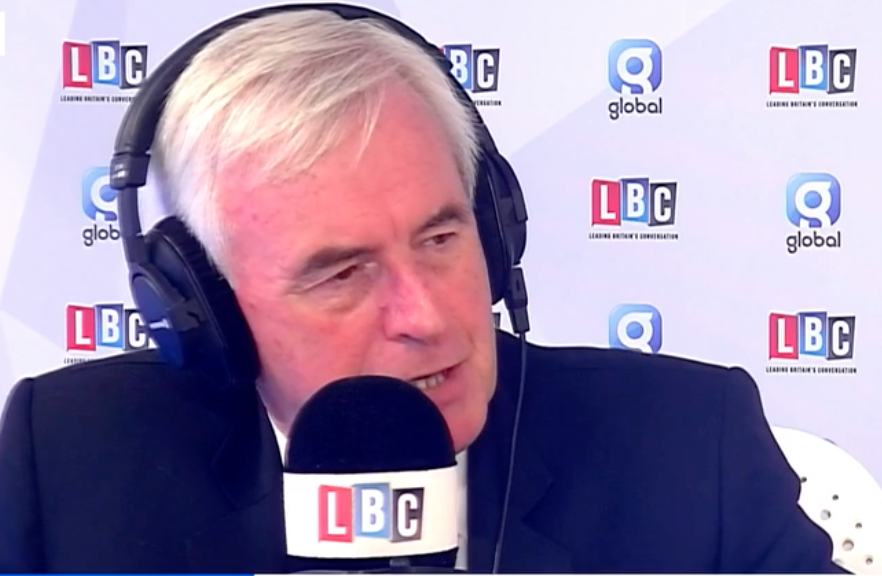 On Tom Swarbrick’s show on LBC on Sunday 26th September 2021, John McDonnell was asked if it is transphobic to say only women have a cervix.

These comments were made shortly after John McDonnell explained that Angela Raynor’s comments calling Tory Minister’s “scum”, were an expression of “real emotion”, “showing deep down humanity”.

Tom Swarbrick: One person who isn’t in here, is your colleague Rosie Duffield, the Labour MP for Canterbury who won in 2017. I want to play you a quick clip because Keir Starmer did do one interview this morning and was asked on the BBC about the recent comments made by that MP, Rosie Duffield. Take a listen if you would.

TS: Do you think it is transphobic to say, ‘only women have a cervix’?

John McDonnell: It depends on the context in which you had said it and the way that Rosie has posed some of these issues has actually felt for some trans people that actually this is an attack on them. This is an incredibly contentious issue so we all have to be careful about the language that we use and what I’m trying to say to people is look we need to talk this through because a lot of this can be resolved by conversation and understanding and empathy. Can you remember…? I went through the 1980s, I was the first Councillor to award a grant to a gay organisation. The reaction was I had my windows smashed, I had a bottle broken in my child’s sandpit and at that point in time we had Conservatives… the Conservative Party introduced Section 28. Can you remember that? We went through that period and we won the argument because yes, we were campaigning but we did it in a way in which we brought people in, explained our position, actually did overcome some of their fears…

TS: But saying there are biological differences between men and women…

JM: It depends on the context

JM: No, it depends on the context

TS: So is Keir Starmer wrong to say ‘it shouldn’t be said’?

JM: Well, in a certain context it shouldn’t, and also if you remember what Rosie said about Cosplaying? Can you remember that? That really upset people. And all I’m saying is we all have to be careful about our language, and as a result, if we are careful, we can resolve many of these differences and we don’t have to be in a situation where people are shouting at one another. That’s how we’ve won all Equalities campaigns. By being firm on principle, campaigning and then convincing people. Largely by reassuring them and overcoming what they think, I think misguidedly, are their fears.