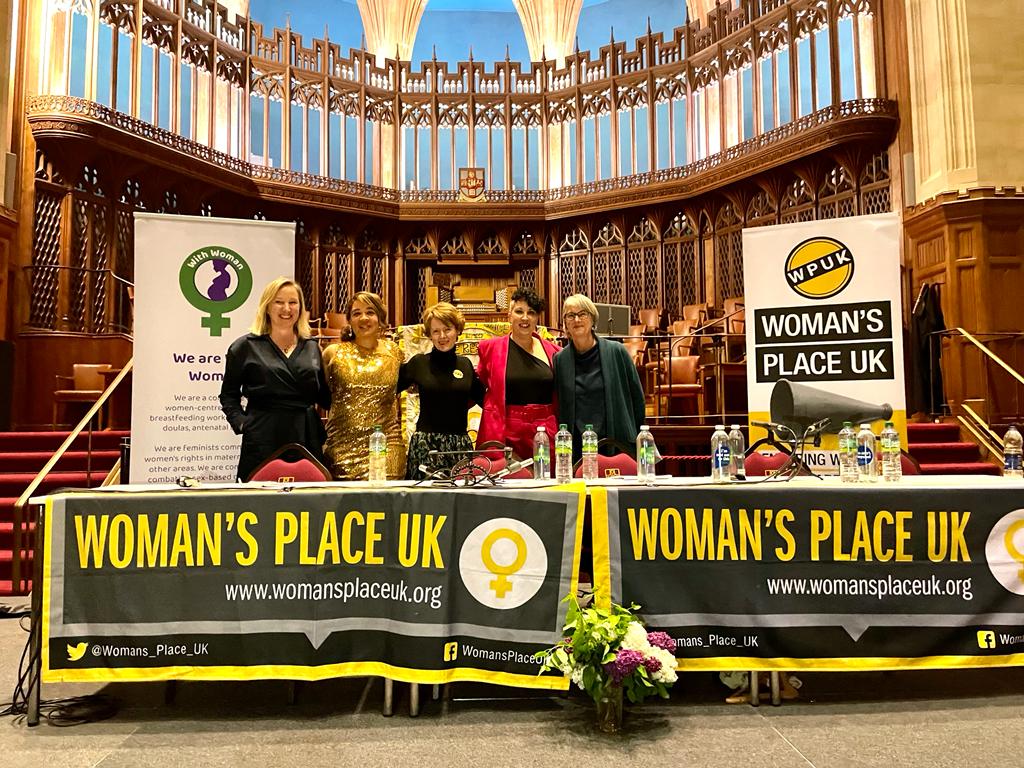 Below is the speech given by Victoria Smith at ‘A Woman’s Place is With Women: feminism, birth and motherhood’ held at the University of Bristol on Tuesday 3rd May 2022, organised by Woman’s Place UK and With Woman.

Victoria Smith is a writer and creator of the the OK Karen newsletter http://tinyletter.com/Glosswitch @Glosswitch

Thank you to A Woman’s Place and With Women for inviting me. I feel really honoured to be speaking here.

My particular interests as a feminist and as a writer are motherhood, ageing and body image. To me, this question of how we name the female body and female embodied experiences is one where it all comes together.

It’s not accidental that people are refusing to name the inherent femaleness of pregnancy and birth at a time when the experiences of older women are being discounted and more and more younger women are in flight from femaleness itself. I believe this is all about undermining the interconnectedness of female experience, between women, across generations, and within our own lifecycles – our connectedness with ourselves.

There can be no feminist movement without this connectedness – that’s why we’re all here.

As a way of starting to strengthen this connectedness, I thought I’d talk about why our female bodies are superior to male ones. I thought of this, and then I worried maybe I shouldn’t go too far – it sounds a bit extreme, a bit alienating to men. But then I thought, who cares?

I’m sick of living in a world in which women and girls are taught, not to appreciate all that is amazing about their bodies, but to despise them, and to view the most amazing things they do as a source of shame and disempowerment.

On top of this, I’m also sick of a body positivity movement which steadfastly refuses to acknowledge femaleness, let alone celebrate it. None of this pain that we go through can be cured if it is made unspeakable.

A bit of personal history here: I suffered from anorexia for many years. I have since had three children and my proudest moments related to my body have been just after giving birth to them.  One particular experience I wanted to talk about was the post-birth bath. This is something that might happen if you’ve had an uncomplicated birth and you’ve had your toast and someone else is holding the baby and all that.

So there you are, you’re bleeding loads and the water’s turning rust colour and it’s brilliant. You’re like a warrior god, drenched in blood, maker of humans. It’s something male people might aspire to with their little wars and petty inventions but they’ll never, ever have. Female bodies are utterly amazing.

At the same time I’m very aware my positive experience is not one all women will have. Some of us don’t want babies, some of us want them but struggle to conceive or carry to term, some women don’t want them but are forced to have them, and some women have deeply traumatic births. There is a lot of luck in fertility, pregnancy and birth – a lot of luck that is often overlaid with crass morality tales – so there is a part of me that is uncomfortable talking about this blood-soaked post-birth pride.

Because it’s not actually an individual triumph. One of my own pregnancies didn’t carry to term and there wasn’t anything I did differently that time compared to the others. The triumph – the achievement – isn’t individual. It’s about femaleness in its entirety.

What I would really like to happen is for this jolt of individual pride – this shot in the arm you get just after childbirth that often fades in the aftermath – to become a collective pride in our sex class. This feeling of being one of the warrior gods should be something all girls can access, instead of them being taught to fear that one day someone might notice they’re nothing more than a member of the gestational front-holed vessel class.

I’d like us, as a sex class, instead of being taught to feel alienated not just from one another, but our own life stages, to feel that connection, that real sense of pride of belonging to the human making class.

It’s not as though men don’t really know, deep down, that this is who we are. That’s why there’s so much bullshit, male-authored religion, science and philosophy which suggests men are the real creators of humans.

In honour of this, I’m just going to quote from a little from Mary O’Brien’s 1981 work The Politics of Reproduction:

“Aristotle appears to have believed that, as the blood disappeared with pregnancy, it must be needed for the manufacture of the child, and one can admire the ingenuity of that speculation. […] Aristotle’s further deduction that women contribute nothing to the child but this arrested menstrual flow has more to do with ideological patriarchy than it has to do with logical speculation, but this idea that women contribute only “material” to babies while men contribute spirit or soul or some other human “essence” must have struck chords in the masculine imagination, for it lingered for centuries.”

O’Brien goes on to describe the creation of this idea of male potency versus female passivity, as a way of overcoming the uncertainty men have in relation to paternity and the male sense of inferiority in the face of female reproductive power.

There is a constant effort – and it’s an enormous effort on the part of men – to interrupt the sense of continuity and connection that flows through individual women’s reproductive lives and binds all women to one another.

Here’s another O’Brien quote, which I think has so much resonance right now:

“Women do not need to bear children to know themselves as women, for women’s reproductive consciousness is culturally transmitted. It is a tribute to the indelibility of male-stream thought that we should have to make this point. Man knows himself as some kind of universal being with all kinds of shades of power and promises of immortality which particular men do not and cannot demonstrate. […] The historical isolation of women from each other, the whole language of female internality and privacy, the exclusion of women from the creation of a political community: all of these have obscured the cultural cohesiveness of femininity and the universality of maternal consciousness. Menstruation and pregnancy have been at times “decorously” shrouded, at other times bravely waved as the flag of the potent male. Breasts have been sometimes flaunted, sometimes flattened, understood as sensual tit-bits rather than as purposeful instruments of nurture. All the while, men have fashioned their world with a multiplicity of phallic symbols which even Freud could not catalogue exhaustively.”

Right now what is happening to reproductive language – and to trans identified female bodies in relation to trans identified male ones – really reflects that, I think. Scientifically we know that Aristotle was talking nonsense. In order to compensate for that, we now have to pretend there is no discernible class of people who gets pregnant at all. We’ve moved from being potting soil to not existing at all.

What I would really like to stress – and this is a reason for quoting O’Brien writing in the eighties – is how old-school, classically patriarchal this thinking remains. It’s important to stress this because one of the problems we face right now is many younger women are very receptive to gender-neutral language in relation to reproduction.

As Adrienne Rich wrote, “The body has been made so problematic for women that it has often seemed easier to shrug it off and travel as a disembodied spirit”. We have to overcome the conditioning that tells us we are inferior, the pornified culture we try to navigate, the sight of our own mothers’ oppression, all of these things that put us in a state of flight. So I do understand why a younger woman might think me talking about bathing in blood and considering myself a god is a little bit much.

But it’s true. We are amazing, and if it wasn’t so, men would not have the sheer nerve to talk and write such utter crap about pregnancy and birth, century after century, and to continue doing it now.

Alienation from femaleness makes women easier to control. What we need right now is a body positivity movement which is not ashamed to celebrate femaleness at every life stage, or to identify the connections between these stages, and between women, without calling this – erroneously – “biological essentialism”.

Because this is what scares these people yelling at us right now: the thought of a bunch of women knowing how brilliant their bodies are – collectively, on a class rather than an individual basis – and not being afraid to say so, or to tell younger women about it. In the end, pride in femaleness is far, far more potent and threatening than pride in femininity.

I mean, what are we up against? A movement which reduces femaleness to “an open mouth, an expectant asshole, blank, blank eyes”. It’s trolling, obviously, but also a real mask slipping moment. They know how amazing we are, just as Aristotle did. We live longer and we make people and we do less damage along the way. We are marvellous and we are taught to think we’re useless.

I’m just going to end with a quote from Marilyn French’s The Women’s Room:

We know they are not correct. We are warriors and we have the right to name our bodies in all their gloriousness.