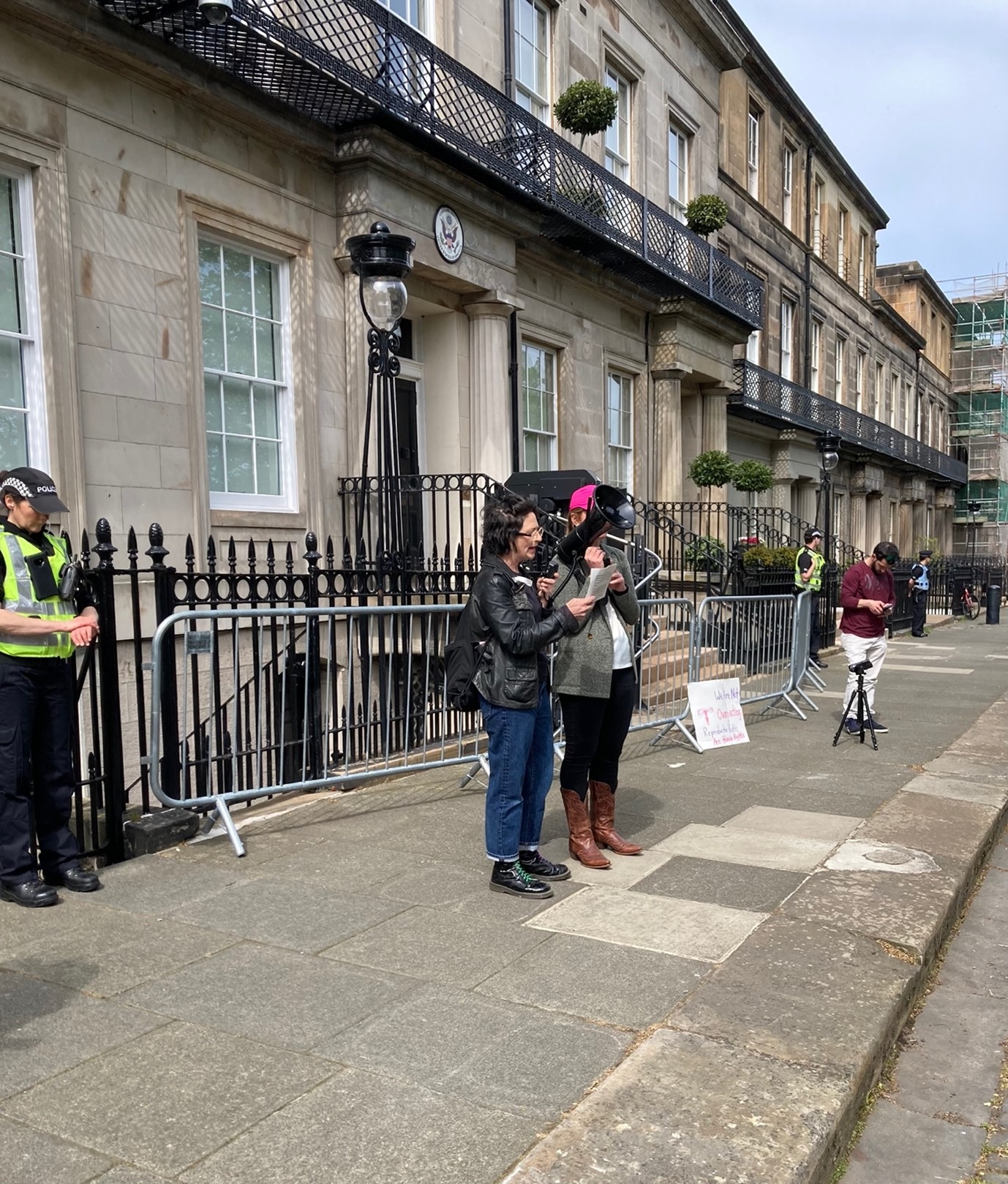 On Saturday 14 May 2022, a rally in support of women’s right to safe and legal abortion was held in Edinburgh. Here an anonymous feminist protester who attended the rally recounts both the powerful contributions of women speakers and the attempts to silence women’s voices.

It was a beautiful sunny day in Edinburgh and I had planned to attend a rally organised in response to the news that the US Supreme Court intends to overturn Roe v Wade, the ruling which paved the way for legal abortion in the USA.

I had seen posters on social media, the first of which referred to ‘women’s rights’ and was badged as a ‘women’s march’. However, a day or two later, I saw another poster circulating where the word ‘woman’ had disappeared. Instead it simply spoke about ‘reproductive rights’. With the benefit of hindsight, perhaps that was a sign of what was to unfold.

A woman’s right to choose

The rally had been organised by Lindsay, an American woman who works at Edinburgh University. When I arrived, just before 2pm, there was a decent-sized crowd already assembled, and banners attached to the railings opposite the US Embassy. Members of the campaign group Abortion Rights Scotland were handing out placards that said ‘Our bodies, Our choice’. Women were also holding homemade signs that said ‘My body, My choice’ and ‘No uterus, No opinion’ and ‘A woman’s right to choose’.

Lindsay spoke first to welcome everyone. As she spoke movingly about the consequences of Roe v Wade being overturned, the crowd was silent, but applauded loudly when she had finished speaking.

Then a trans identified male took the megaphone, explaining the format for the rally. He invited another trans identified male to speak. I was standing too far away to see, but a photo circulated on social media later revealed the slogan on his T-shirt which said “TERFs will not be part of the contemporary struggle against fascism – Judith Butler“.

His speech moved away from abortion and the plight of American women, as he sought to situate the issue alongside the rights of trans people to achieve ‘body autonomy’ and reform of the Gender Recognition Act.

As the heckling and shouting continued, he finished his speech saying that he hoped people who were ‘gender critical’ would “fight for body autonomy of everyone.” The two trans identified males then led the crowd in a chant saying “Our bodies, our choice.”

I was shocked and upset that a speaker at a rally organised to show solidarity with American women had so determinedly dragged the issue away from their struggle.

The struggle for abortion rights in Scotland

The next speaker was Ann Henderson, from Abortion Rights Scotland. Lindsay stood at her side holding the megaphone. I felt myself relaxing again at the sight of two women taking the platform.

Ann spoke at length about the struggle for abortion rights in the UK, naming some of the women who had fought so hard to secure them. She reminded the crowd that those were rights secured for their sisters and daughters and mothers, and that women seeking an abortion after 16 weeks in Scotland have to travel to England to undergo the procedure.

Next up was Green MSP Gillian Mackay, who intends to introduce a private member’s bill to the Scottish Parliament to put in place buffer zones around clinics which offer abortion services. She was followed by Labour MSP Monica Lennon, who recently called for the Scottish Government to convene an abortion summit to discuss women’s right to abortion in Scotland.

One of the most rousing speeches was then delivered by another American woman, who identified herself as ‘Caroline’. She spoke passionately about her own experience of abortion and how, if Roe v Wade is overturned, many women and in particular poor and ethnic minority women would lose their access to safe, legal abortion.

A man demands to speak

When she had finished, a man stepped up. I recognised him as the person who had been chanting “Let people speak!” when the trans identified male had been speaking. The speaker introduced himself, saying he was a nurse and trade unionist. He demanded that the crowd respect his freedom of speech, saying “let me speak without interruption” and “you’ll get your chance to speak once I’m finished”. He chastised those who had heckled the trans identified male.

There was one final speech by a woman (‘Lucy’) who spoke about how precious the right to abortion was. She told the younger women in the crowd that older women would always have their back. She asked the crowd to listen to the women who had been shouting “Let women speak!“, and not alienate them.

How have we got to a place where the word ‘woman’ is unsayable?

As I walked home, I felt a mixture of emotions. It was heartening to witness such a strong display of female solidarity in support of American women. But I also felt crushed. How have we got to a place where the word ‘woman’ is so unsayable even when we are talking about abortion? How is it that men have become so emboldened in seeking to dominate debates about women’s rights, displacing women themselves from those debates? How?