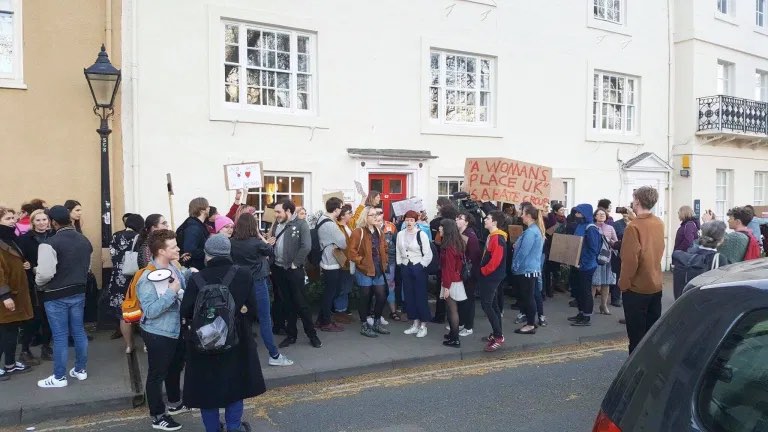 Our response to misrepresentations of our campaign in the Oxford Mail.

One interviewee, Alana, was quoted as saying

I studied at the University of Oxford and graduated in 2021. When I was doing my undergraduate degree prior to the pandemic I wasn’t really involved in LGBT student groups. I co-founded Oxford Feminist Society and we were really big supporters of the protests going on against transphobia in Womens [sic] Place UK at the time.”

When we became aware of this unsubstantiated and potentially defamatory reference to us, we wrote to the Editor requesting a right of reply.

We have received no response.

This is the text of our letter:

We at Woman’s Place UK are not clear why Alana has wasted time organising against non-existent transphobia in our organisation (Oxford’s LGBTQ+Changemakers, 4th June 2022). Alana could have come to either of our Oxford meetings and seen what we are about.

It is not clear from the article which protests Alana supported. We hope it was not the intimidating demonstration outside the Friends Meeting House in 2018 where, at the same venue, the voices of a group of survivors of sexual violence were drowned out by the protestors who refused to step away from the door/windows when asked by the manager.

We wonder what kind of feminism it is that trades in such misrepresentation and supports the harassment of women organising for our rights and needs.

While this kind of ‘feminism’ sells women out, we are focussed on fighting for women, not against them.”

This was the second attempt by Oxford women to organise a meeting. Plans to hold a meeting at the University in January 2018 were cancelled under pressure from activists.

Students at Oxford University then attempted to obstruct this meeting too. Our statement ahead of the meeting noted:

The Oxford meeting is now facing a campaign by Oxford University Student Union societies and officers, who have issued a statement containing many inaccuracies and calling on the University to condemn the meeting, and urges students not to attend. We believe this statement defames Woman’s Place UK and our speakers, and we are seeking legal advice.

A large protest was held outside the venue, disrupting a survivors group meeting (who had nothing to do with our meeting) and distressing staff of the venue.

Gaby Hinsliff attended this meeting and reported on it for the Guardian.

We have now held 30 public meetings all over the UK and nearly every one has been hosted in the face of substantial obstacles including aggressive and intimidating protests.

We note that since we emailed, the wording of the paragraph has been amended as follows:

I studied at the University of Oxford and graduated in 2021. When I was doing my undergraduate degree prior to the pandemic I wasn’t really involved in LGBT student groups. I co-founded Oxford Feminist Society and we were really big supporters of the protests against Womens Place UK (amid allegations of transphobia which have previously been denied). [our emphasis]

We are pleased to see that the Oxford Mail has made this correction.

However, we do not understand how such a comment was cleared for publication in the first place. The Oxford Mail has previously clarified our position in a stand-alone rebuttal after misrepresentions about us in a previous article.

We regret the Editor did not have the courtesy to respond to our email and inform us of the correction.

We sincerely hope that, in future, the Oxford Mail can get its facts right before publication instead of afterwards.

Our statement on attempts to stop the Oxford meeting

Gaby Hinsliff wrote about this meeting for the Guardian.

A Woman’s Place is ours to define Oxford Prospect

Free speech at Oxford: Do women have the right to meet to discuss legislation Michael Biggs