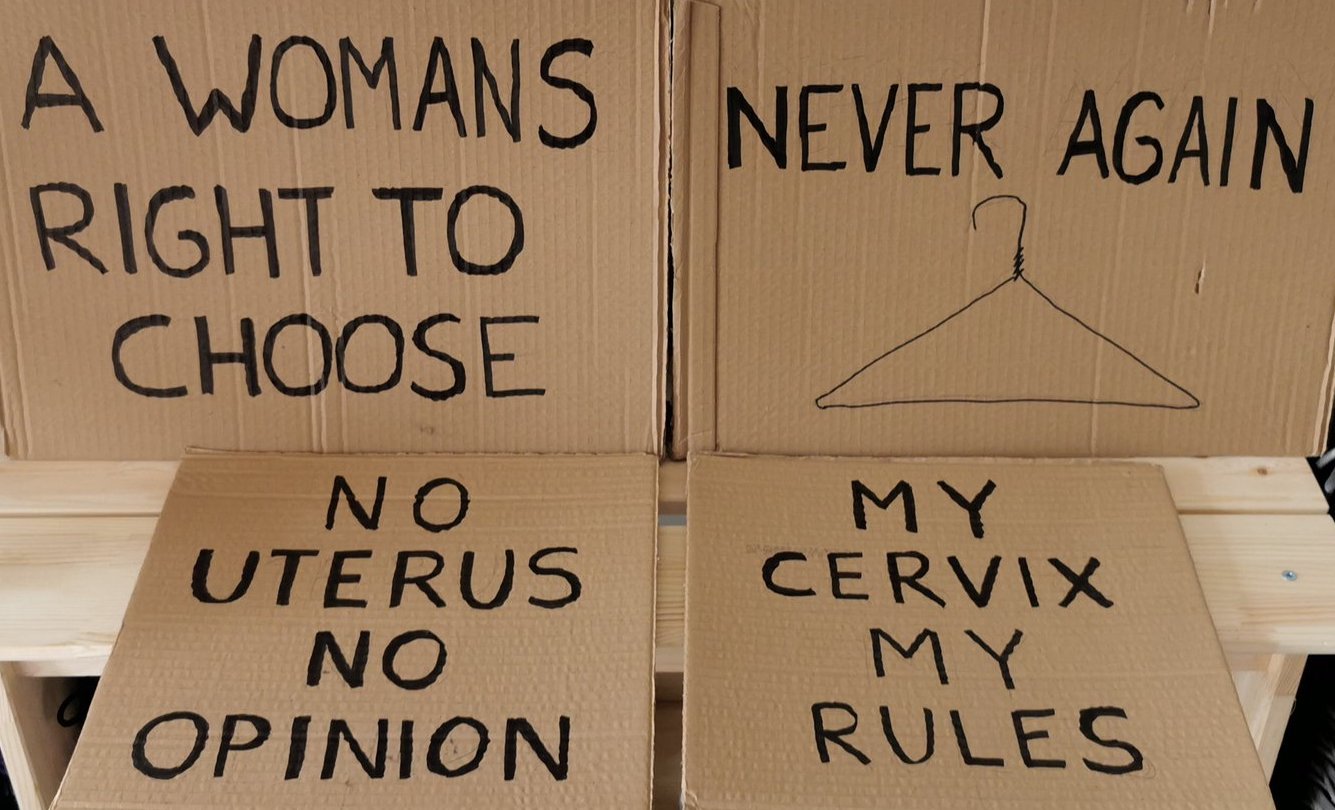 This was a speech given by Caroline Robinson at a protest in Edinburgh on 14th May 2022 in solidarity with US women whose abortion rights are under attack after news that Roe v Wade is likely to be overturned by the Supreme Court.

Women deserve the right to choose if they want to be pregnant or – not. This is nobody else’s choice – especially a man’s.

And if you thought Justice Alito had more respect for women than his own ideology – you would be wrong. When he was at Princeton in 1968 – he voted for the University to NOT admit women. He has wanted to write this opinion since he was nominated to the bench by George W Bush over 15 years ago.

If Roe v Wade is overturned, as it looks highly likely to – then many, many women, mostly poor and ethnic minority women, will lose their access to safe, legal abortions.

For those who are not familiar with the geography of the USA – If you are in Mississippi – that is an over 10-hour drive to a State that has legal abortion. And that is only if you can afford it – both in time and money.

No woman ever chooses to have an abortion lightly. But, if they decide to have one, it is usually because a previous method of birth control has failed, they were raped, the pregnancy was not viable, or their own health was at risk. Women and girls who have disabilities or, unfortunately, drug + alcohol addiction issues can be incapable of accessing safe birth control or understanding the ramifications of unsafe sex.

Should we be punishing these women instead of helping them?

So if they choose one day to have future children, they will be healthy, confident and enthusiastic mothers? Instead of being coerced, scared and forced to give her body over to the state for over 10 months.

I can’t imagine this ever happening to me. I have had two children and two abortions. I would not have had the two amazing boys that I do – or be the mother I wanted to be if I had continued with my two other pregnancies. One would have ruined my job, and the other one would have killed me.

Women deserve the right to have safe, affordable, convenient medical contraceptive care. We take this for granted in the UK. But in many parts of the USA – this is already not the case. For poor women in Texas – it already feels like The Handmaid’s Tale. I believe the last clinic that offered abortions closed several months ago.

Women must say loud and clear – NO!

Roe v Wade must stand. Women must not lose this right to their bodily autonomy. It is an invasion of women’s privacy for the state to decide what happens inside her own body.

I am old enough to remember the bombings of abortion clinics in the 1980s + 1990s when Operation Rescue was barricading clinics in NY where I went to get The Pill, NJ and famously in Witchita, Kansas – where they succeeded in closing all the clinics for most of the summer of 1991.

I volunteered for Planned Parenthood, where I did escorting. Which – for those who don’t know what this is: I would meet the woman, or often teenager, at a separate location away from the clinic, and ‘escort’ her into the clinic past the protesters carrying placards of 8.5-month-old aborted fetuses and threatening her, and me, with death and damnation. Sometimes they were violent as well. Several doctors were murdered by Operation Rescue.

I also did activism work and campaigning for The National Organisation of Women. That is where I heard the stories of the women who had the ‘off-the-book’ abortions, which were expensive, painful and traumatic. Many of these women NEVER recovered from these experiences.

I also heard the stories of the women who gave birth to dead infants primarily because of no maternity care, because were too scared to tell anyone they were pregnant.

How is that ‘preserving the sanctity of life?

If the anti-abortionists really cared about protecting life – they would be calling for free, convenient access to birth control for all women who can get pregnant and provide free maternity care and childcare.

They want to punish the women who get pregnant that don’t want to be, or who can’t safely carry the baby to term or look after it afterwards once it is born.

This is cruel. Both to the mother and the child.

We must stand together – as women – and say loud and clear – in front of the US Consulate in Edinburgh – that Roe v Wade must stand.

Women must always have access to safe, affordable and accessible abortions.

Advice to US Women to Compromise on Abortion Rights Misses the Mark: Katherine M Acosta

In Response to Alito ’72, a Defense of Women’s Rights, Princeton Alumni Weekly, 9th May 2022

From Alito’s past: a window on conservatives at Princeton, New York Times, 2005

Black and Hispanic people [sic] have the most to lose if Roe is overturned, PBS News, 4th May 2022