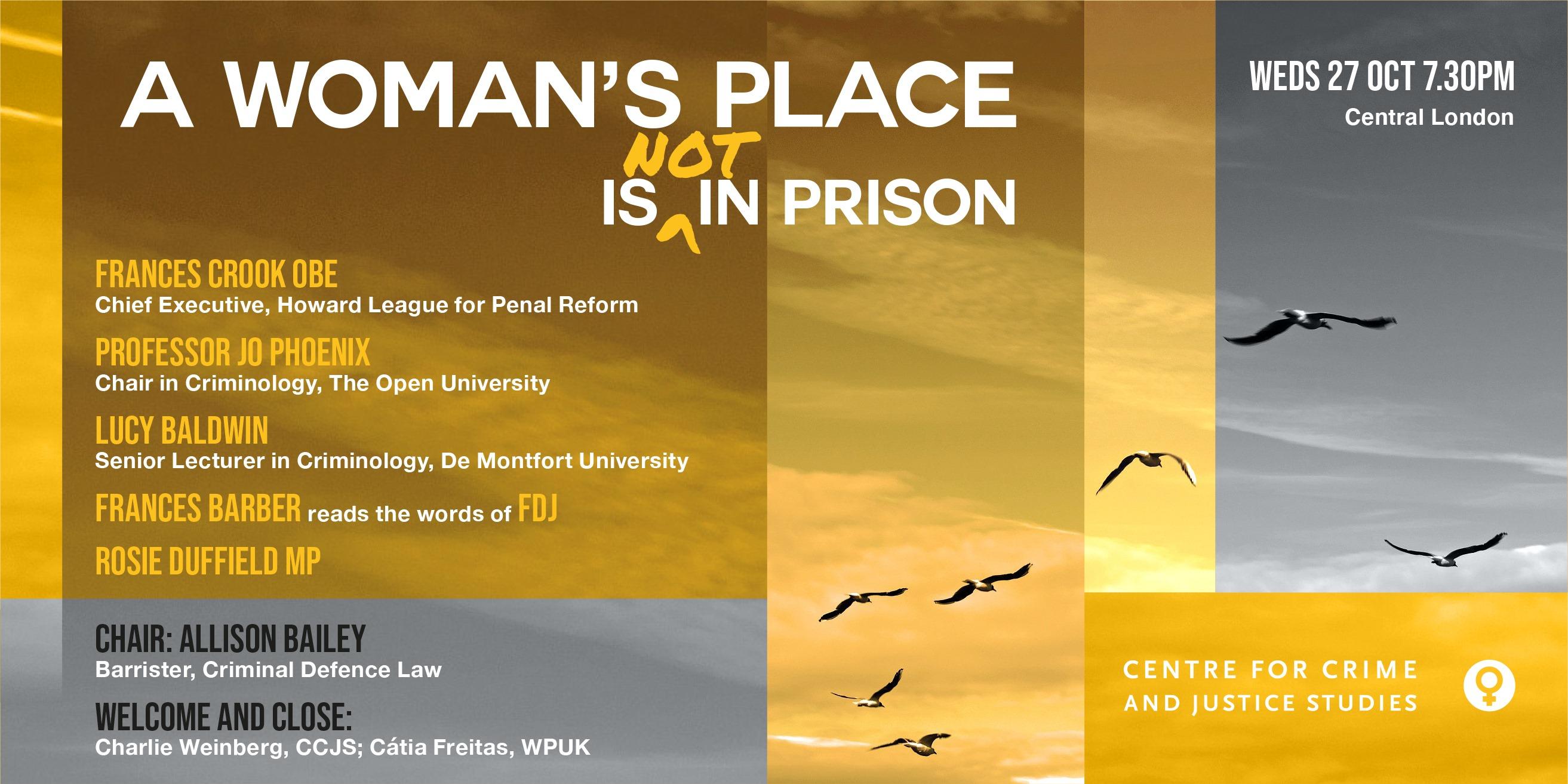 Joint meeting of Woman’s Place UK and the Centre for Crime and Justice Studies.

The ruling handed down by the High Court in FDJ v Secretary of State for Justice shows that UK law does not work for women. In dismissing the claim by a woman prisoner who had suffered a sexual assault by a male prisoner whilst in a women’s prison, the judges have exposed the failings of the UK criminal justice system and its blatant disregard for women’s rights, safety, privacy and dignity.

This meeting will discuss the neglect of women’s needs and inherent sexism in the penal system, of which the callous disregard for women being locked up with male prisoners is just one facet, connected to others. We shall also look at the solutions and the need to get women out of prisons (a system designed around the containment of men) by providing better, more therapeutic, sex-specific services and approaches.

If you are able to do so, please consider booking a solidarity or super solidarity ticket. Donations can also be made at Woman’s Place UK

Frances Crook was appointed Chief Executive of the Howard League for Penal Reform in 1986. She was awarded an OBE for services to youth justice in the 2010. She is a Senior Visiting Fellow at the London School of Economics and an Honorary Visiting Fellow in the Department of Criminology at Leicester University. She has Honorary Doctorates in Law from Liverpool and Leeds Beckett universities. She has held several non-executive roles including on Barnet NHS, the School Food Trust and as a Governor of Greenwich University.

Jo Phoenix is Professor of Criminology at The Open University and the co-founder of The Open University Gender Critical Research Network. She sits on the Howard League’s Research Advisory Group and is a Trustee for The Centre for Crime and Justice Studies. Her research interests include sex, gender, sexualities & justice, youth justice & punishment, the production of criminological knowledge, academic freedom and research ethics. She is currently working on two projects: writing a recent history of youth justice practice & researching issues relating to sex & gender in the context of female prisons.

Lucy Baldwin is currently a Senior lecturer in Criminology at De Montfort University. She has over 35 years’ experience in criminal and social justice settings. Lucy has worked as a Social Worker and a Probation Officer, in prisons, a range of community and secure settings. Lucy’s research and academic publications focus predominantly on the impact of imprisonment on mothers and their children. Lucy’s work and recommendations helped to inform the Female Offender Strategy and Lucy gave both oral and written evidence to the female focussed Farmer Review and the Joint Human Rights Inquiry into Maternal Imprisonment and the Rights of the Child.

Frances Barber is an award winning actress whose work has combined leading roles in theatre, film and TV in the UK. Seasons at The RSC, The National and London’s West End have seen her play a variety of parts in plays by Shaw, Chekov, Tennessee Williams, Shakespeare & many contemporary playwrights. On film, she has worked with Mike Leigh, Stephen Frears, Peter Greenaway and Kenneth Branagh amongst many others. On TV, she has played innumerable roles in drama series. Recent credits include The Split for BBC One. She played the title role in Phyllida Lloyd’s ground breaking all female production of Julius Caesar at the Donmar Warehouse which transferred to New York. Most recently Frances has completed a sell out run as Polonius opposite Sir Ian McKellen’s Hamlet at Windsor Theatre Royal. She will be reading the words of FDJ.

FDJ is a former prisoner. She was granted anonymity as the claimant in a Judicial Reviw challenging the lawfulness of the the Secretary of State for Justice’s policies on the placement of transgender prisoners. In particular she challenged the policy of allocating to women’s prisons male transgender prisoners who have been convicted of sexual or violent offences against women. Her words will be spoken by Frances Barber.

Rosie Duffield has been Member of Parliament for Canterbury since 2017, when she became the first Labour parliamentary representative of the constituency in its hundred year history. She was chosen as one of the first Labour women for the Jo Cox ‘Women in Leadership’ scheme in 2016 and has worked with and campaigned for the WASPI women and 50:50 Parliament. She has been on the Women and Equalities Select Committee and is Chair of the Women’s Parliamentary Labour Party.

Allison Bailey (Chair) is a barrister specialising in criminal defence law. She has spent 20 years defending women caught up in the criminal justice system. She is a feminist, a lesbian and herself a survivor. In October 2019, she launched the Lesbian, Gay and Bisexual Alliance – LGB Alliance. She is a powerful voice in the struggle to maintain women’s sex-based rights and protections.

Charlie Weinberg will open the meeting on behalf of the Centre for Crime and Justice Studies, where she has been Chair of Trustees for five years. Charlie has worked in the Voluntary and Community sector for 30 years, often designing and developing services specifically with women and girls. Through her many years of practice, Charlie has a good understanding of the ways in which institutional policy directly affects service design and delivery.

Cátia Freitas will close the meeting on behalf of Woman’s Place UK. She is a community and union activist. She is @Mocha_Soul on twitter where she gives a valuable online voice on women’s rights understood in the complex contexts of working class politics, internationalism and race. She is on the editorial board of the feminist quarterly The Radical Notion.

either: a negative lateral flow test dated within 48 hours of attendance (reported on the Government website & displayed via text or via the NHS app). You can find out more about lateral flow testing here.

or: proof of double vaccination no less than 14 days before attendance (displayed via the NHS app or NHS website). Find out more about proof of vaccination status here.

A thermal imaging camera will be used and admission will not be granted to anyone with a fever (above 38.0 C). Please don’t attend if you have a high temperature, a new, continuous cough, or a loss or change to your sense of smell or taste.

Masks must be worn (unless exempt) while entering the venue and while moving through public areas of the building.

If these arrangements are changed, we will update this eventbrite page and contact ticket holders.

At the Centre for Crime and Justice Studies, we envisage a society less dominated by criminalisation and punishment, because we find better ways to prevent and address the problems we face.