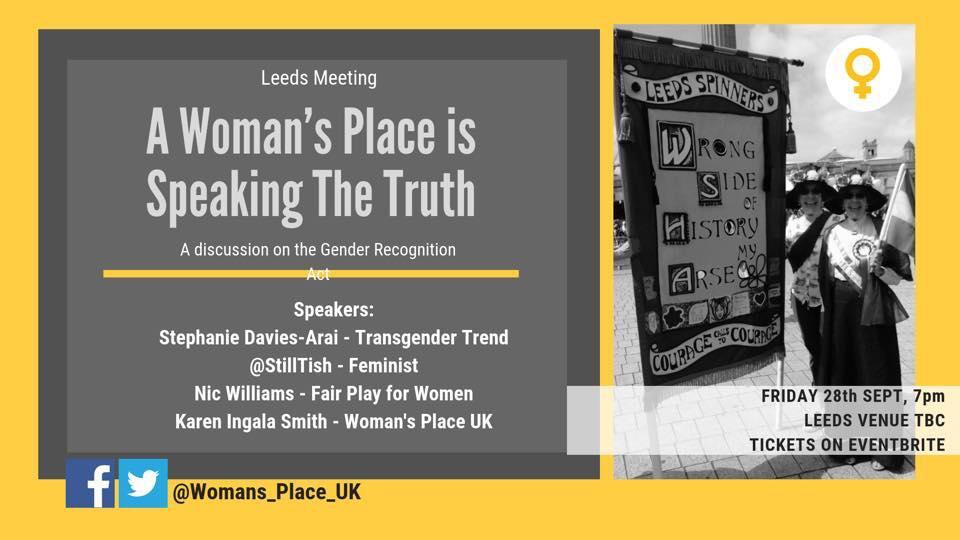 A Woman’s Place is Speaking the Truth

@StillTish Feminist deeply concerned with women’s rights, especially the safeguarding of women and girls, in the context of proposed revisions to the Gender Recognition Act. She is involved in this debate because of personal experience of Rapid Onset Dysphoria. Due to both of these reasons she has become very much involved in researching and raising awareness of Gender Critical discussions.

Nic Williams Research scientist specialising in human biology, writer and speaker on reform of the Gender Recognition Act and its impact on women and children.  Speaking for Fair Play for Women.

Karen Ingala Smith, Woman’s Place UK. CEO of a women’s sector NGO with 27 years experience of providing specialist services to women. Founder of Counting Dead Women (recording and commemorating all UK women killed by men or where a man is the principle suspect/perpetrator).

In July 2018 the government opened a public consultation on their proposal to ‘demedicalise’ the process of changing gender, so that people can self-identify as the gender they choose, without any need for a medical diagnosis of gender dysphoria.

But what exactly is ‘gender’, and what will be the impact of self-identification on women and on women’s rights and legal protections?

ID is required for each person attending and must match the name on the ticket. For this reason, only one ticket can be booked at a time – sorry for the inconvenience.

There is no minimum age. Babes in arms are encouraged. Please consider the suitablity of the event if bringing children. No unaccompanied children.

Tickets bought may be refunded up to seven days before the event. Organisers reserve the right to refund and cancel any tickets ordered. Venue details are confidential to ticket-holders. A collection will also be made to cover costs of the meeting.