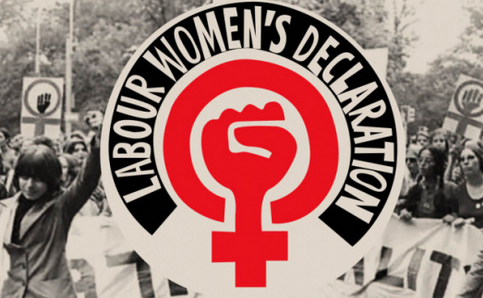 Paula Boulton is a musician, playwright and granddaughter of one of the first women Labour councillors.

Some of you will be wondering why I am making such a big thing of this.

Well, are you sitting comfortably?

I have been fighting for Women’s rights since I was 14. It started with a school protest to get us the right to wear trousers.

In the late 70s I marched as a student for abortion rights and Gay liberation.

In the early 80s with thousands of other Women in the Peace movement we went to Greenham Common and protested about Nuclear Weapons and were treated appallingly as Women.

I walked to Moscow and saw how Women were treated in other countries.

Coming back to Corby I got involved supporting the Miners – working with Miners Wives to bring kids to Corby for a holiday.

I was asked to speak at the May Day Rally in 1986 – with 20 minutes notice! My comrades had suddenly realised that they didn’t have one woman on the platform. I was temped to refuse and show up the sexist attitude which was normal at the time. But in the end I spoke – I had my 2 yr old nephew with me in a pushchair.

As I entered the Labour Club (which my Dad founded in 1963 ) the doorman pointed to Daniel and said, “You can’t bring that in here”.

I said”, That happens to be the grandson of the founder of this club – and I happen to be one of the speakers so I suggest you hold the door open for me!”

I barged my way in and gave a very fiery speech – without them even finding me a space to sit alongside them on the podium by the way….

The next day on the “Hands across Britain” action against unemployment – as I was being driven to find a loo with some other women (what no Women’s toilets??? Some things have not changed) the male comrade who was driving congratulated me on my speech. “But,” he said, “They won’t ask you back!”

“Because you brought up all those issues and the Women gave you a big round of applause!”

I had mentioned sharing childcare and domestic responsibilities and rape and domestic violence and that we weren’t born with an inbuilt knowledge about using a hoover! I pointed out that Women could not take part in political activity unless child care was sorted and meetings held at times that fitted around children. It took another 20 years for the Working Men’s Club and Institute Union (CIU) to allow Women to be members in their own right of working men’s clubs..

I started the Women’s Centre with my sister in 1986 appalled at the amount of domestic abuse taken for granted all around me. I listened to, and gave emotional support to thousands of Women over 20 years: survivors of rape, incest, sexual abuse, sexual harassment, unwanted pregnancy, failed contraception; Lesbian mothers losing custody to violent fathers; stories of unfair working practices like having to wear a red badge at the Perfil perfume factory if you were on your period; tales of women being paid a fraction of their male colleagues: a door man earning 4 times as much as the female manager because – to quote the boss “He is a young man and will have higher expenditure.” What, than a single mum on the bread line???

Until all our sisters are free.

And if you are a strong Corby woman like me, with steel as your backbone, fire in your heart and pride in your soul, used to making do with nothing – let me tell you – strong matriarchs of Corby – that is not normal – we deserve better, we deserve equality!

This Woman of Steel is not going to sit back and let the hard won rights that we have fought for alongside thousands of other women – be taken away.

You can read the Labour Women’s Declaration petition here

Women of Steel by Paula Boulton:

“This book tells the story of the rise and fall of the Steel Industry in Corby through the eyes of Women and Children in the unique form of a play with photographs. Originally written to commemorate 30 years since closure in a limited edition of 1500 copies – this 10th anniversary edition is available for purchase online using Print on Demand technology.”