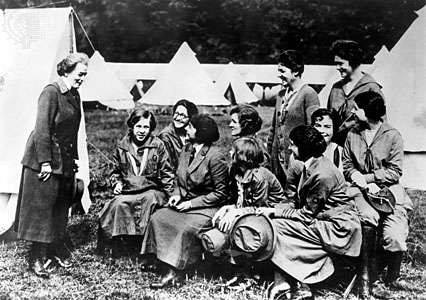 Helen Watts was involved in Girlguiding as a child and adult. Since 2018, she has been campaigned for Girlguiding to review their trans policy, which breaches girls’ right to privacy and dignity, risks their safety and excludes gender non-conforming girls.

When you think about the Girl Guides, what springs to mind?  Brownie points, uniforms, campfires.  A small C conservative movement, the youth wing of the Women’s Institute.  Left wing parents send their children to the mixed sex Woodcraft Folk and for many adults and children of various political persuasions, the promises to Queen and Country are incompatible with their beliefs.  No one ever thinks of Girlguiding as a radical organisation, but at the beginning, it really was.

From the very start, admission to The Guide Association was restricted to the female sex only.  Early 20th Century Britain knew exactly what a woman or girl was; how else did we know which half of the population to deny equal voting rights with men until as late as 1928 (my own grandparents lifetime)? Girlguiding’s early leaders recognised that sex was not synonymous with gender, and its early pioneer, Agnes Baden-Powell, was anything but gender conforming.  She created a movement that was conventional enough that parents permitted their daughters to join, but also allowed girls to break free of stereotypes and experience life outside that of nurturer and homemaker.  The very first badges included Cyclist, Air Mechanic, Electrician and Sailor[1].  And while many women’s memories of Guiding from the 1960s onwards includes endless crafts and hostess badges, the movement has always recognised that girls benefit from a space away from the male gaze.

By the 21st century, the landscape has changed.  Scouts became fully mixed sex from 2007[2] and its image as the more adventurous and exciting youth movement attracted girls and young women to its ranks.  Girlguiding’s image as a middle-class, middle England institute stuck fast, sometimes unfairly so; the woman who was my childhood Brown Owl was from working class stock and a union official, in addition to her full-time job in the NHS, her own family and running the local guiding district.  She’s still a family friend.   In 2012, Girlguiding appointed a new CEO, Julie Bentley, formerly CEO of the Family Planning Association.  Her appointment caused a stir in Guiding circles, but she brought new energy and began a series of reforms to modernise and refresh the movement.

The first of those reforms was the Promise.  It had been changed 11 times previously, most recently in 1994.  In September 2013, the Promise was altered to remove reference to God[3].  Now, members promise “to be true to myself and develop my beliefs”.  This was broadly welcomed (including by me) as it allowed women of all faiths and none to make the Promise, a pre-requisite of full membership.  Some Christian Guiders objected to the secularisation of the Promise.  For these women, their faith is an intrinsic part of Guiding, and they wanted to retain the option to keep the religious promise.  The members were threatened with expulsion and the closure of their units, until Girlguiding relented[4].  There is still no religious or alternative wording.  By contrast, Scouts have many variations of their Promise; members pick the one that best reflects their beliefs[5].

The other significant Bentley reform was the shift from biological sex to gender identity as the qualifier for membership.  Girlguiding HQ formed a relationship with Gendered Intelligence in 2016[6] and this was followed by the release of the “trans inclusive” (but not inclusive of trans identified females) policy in 2017.  I expect most readers are familiar with what happened but in summary:

Many women understand that sex and gender are not synonyms.  Gender is a schema for masculinity or femininity and Girlguiding, of all organisations, should know how harmful this can be to girls.  “Gender” tells little girls to play quietly and speak softly; to put other’s needs before their own; to set a good example and manage the behaviour of boys in their class; to be pretty and biddable; ultimately to be subordinate.  The notion that each person has a gender identity (“a person’s sense of self, as, for example, a woman, man or non-binary person”) is presented by Girlguiding and countless others as established fact, yet I have never seen any evidence to support this, and the definitions used to explain the concept are nothing more than circular platitudes (“trans women are women”).

The only thing I have in common with the other women and girls in Girlguiding is our biological sex, which is fixed and immutable, a material reality that exists outside of any philosophical belief.  Through our sex, we also experience sexism, discrimination, abuse and assault.  The Girls’ Attitudes Survey, published annually by Girlguiding, provides insight into how girls of all ages experience sexism, racism, sex stereotypes, harassment, and abuse[7].   The implication that women and girls can simply identify in and out of this oppression shifts responsibility onto individuals and avoids addressing the root causes at societal level.

Nevertheless, if someone believes that they have a gender identity then I will support their right to hold that belief, just as I respect everyone’s freedom of belief, irrespective of whether I share it.  I will use requested names or pronouns, provided that my request not to be called “cis” is also respected.  Girls and young women should be encouraged to debate and to respect and get along with people who don’t agree with them.  What I cannot support is compelled belief, especially one that is presented as scientific and progressive but is in fact based on regressive sex stereotypes and individualism, both of which should be antithetical to Girlguiding.  Rather than challenging them, the trans policy relies on girls upholding feminine stereotypes such as compliance and submission, and that is before we consider the impact on safeguarding, privacy, and dignity.

There is a paradox here; on the one hand, Girlguiding has made significant changes to open membership to women and girls of any religious belief or none.  Simultaneously, it outcasts any member who does not subscribe to the belief system of gender identity, effectively replacing one patriarchal construct with another.  And more than that, Girlguiding has banned any discussion of the concept of gender identity and has a history of encouraging leaders to report each other for the heinous crime of believing biological sex to be real and important.  There is a certain irony that J.K. Rowling – the most successful female author ever, a survivor of domestic violence and sexual assault, a single mother whose hard work, intelligence and imagination has probably done more than anyone else to inspire children to read – would almost certainly have been investigated and expelled had she posted her Twitter threads as a Girlguiding leader.

Girlguiding says that its young members support trans inclusion.  This is misleading: women’s sex-based rights are not exclusive of trans men, and no one is arguing that trans girls or women shouldn’t have rights.  Male children who identify as trans remain both biologically and legally male, as minors cannot acquire a Gender Recognition Certificate.  If Girlguiding excluded trans girls from membership, and restricted their access to female only dormitories etc., they would be treated on the same terms as male children who do not identify as trans, and girls would have adequate privacy and safeguarding.  One often quoted statistic is that 86% of girls said that trans people should not be discriminated against[8].  This comes from the 2016 Girls’ Attitudes Survey and the question actually related to LGBT discrimination[9].  It does not mean that girls have consented to changing their clothes in front of male teenagers, if that male identifies as a trans girl, and to suggest it does is misrepresentation.

I sound facetious but the lack of clarity, as with many female-only services, is confusing.  Girls from other protected groups could be put off joining altogether, even to the point of indirect discrimination.  A disabled girl may be less inclined to join if she is not guaranteed a female for medical or personal care; girls from minority faith groups may not want to join if males are present.  Girlguiding may say that any girl can request a private space but in no circumstances should any woman or girl have to bargain for her right to single sex accommodation.  “No”, is indeed a complete sentence.

You can hear me talk more about Girlguiding’s trans policy and its impact on safeguarding here: https://www.youtube.com/watch?v=0efmkiwk1f8

Former Guider and developmental psychologist Katie Alcock was expelled from Girlguiding with me in September 2018 for her gender critical beliefs.  She is taking legal action against Girlguiding.  You can read more about her case and support here: https://www.crowdjustice.com/case/expelled-from-girlguiding/