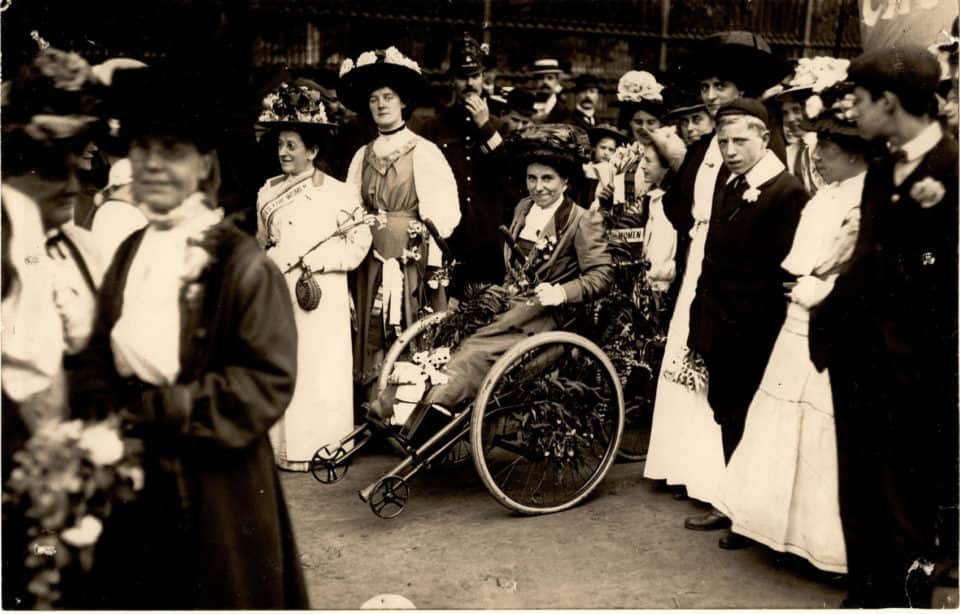 Louise Raw is a writer and historian with a particular interest in the less-told stories of British history: of women, the working class and BME people.

The Suffrage movement – all Pankhursts, all the time? You could be forgiven for thinking so.

Meryl Streep’s appearance as Mrs P in the film Suffragette, shining like a beacon from a balcony as the rank and file cheer below, sums up the misrepresentation of the movement in mainstream history as having only one ‘real’, white, middle-class leader.

But working-class women were the life blood of the movement; and founded the first suffrage organisation in Manchester 36 years before the Pankhurst’s WSPU.

The year before that, in 1866, a petition demanding enfranchisement had been presented to Parliament – and one of the key signatories was a Black woman, the inspirational suffrage and abolition activist Sarah Parker Redmond.

Five years later, Adelaide Knight was born in Bethnal Green. A childhood injury left her disabled, and she used crutches for the rest of her life.

A highly intelligent woman with an artistic soul, she loved poetry, music and history – and one extraordinary man. Donald Brown was the son of a Royal Navy officer from what is now Guyana. His father had murdered his mother when Donald was ten; Donald and his sisters were sent to a workhouse; Adelaide’s father had killed himself. That they achieved so much despite their childhoods is testament to their spirits and their relationship.

Donald was also a socialist and suffrage supporter; he took Adelaide’s surname when they married in 1894. Mixed marriages had a long tradition in London but that didn’t mean the couple were spared racism.

By 1906 Adelaide was the ‘leader of the working women suffragettes’ in London, who were so vital to the movement, and in June of that year was arrested for trying to lobby Herbert Asquith.

She was sentenced to prison unless she agreed to be ‘bound over’ for one year – which would have meant giving up activism.

It was a hard decision – Adelaide’s health was frail and she had two small children.

‘What can I do?’ she asked her husband; ‘To draw back will encourage this intimidation…It will be agonising to be away from you and our children, but with your help I can face this.’

Donald replied: ‘My dear… We have supported each other for many years; we must not fail now that we are to be put to the test.’

Adelaide chose prison. Despite grim conditions, she kept up her spirits by singing the The Red Flag every morning, engraving some of its lyrics on her cell wall with a hairpin. .

She later left the Pankhursts’ WSPU as it became increasingly undemocratic and neglectful of working class members. But her activism never ceased – in 1920, she became a founding member of the Communist Party of Great Britain. A year later Donald was honoured by the King for single-handedly preventing a major explosion at the Woolwich Arsenal where he worked.

Another frequently-arrested suffragette was everything the establishment disapproved of- female, political, bisexual, sexually-liberated and proudly working class.

Annie Kenney was born in Oldham, the fourth daughter of twelve children, and began working in a cotton mill at 10. One of her fingers was subsequently ripped off by a spinning bobbin.

She became a suffragette after seeing Christabel Pankhurst speak in 1905.

Months later, Kenney and Pankhurst were arrested together for heckling Winston Churchill. It was said the two women were lovers, and that the charismatic Kenney cut quite a swathe through the suffragettes, having a number of lesbian relationships

In total Kenney was arrested 13 times, and repeatedly subjected to brutal forced feeding.

Like many suffragettes, particularly working class ones who were treated far more harshly, she was left with life-long health problems.

Suffragettes were not just subjected to violence in prison – as ‘enemies of the state’ they were treated with punitive, misogynistic brutality on demonstrations both by police and organised gangs of anti suffrage men. Sylvia Pankhurst said she was invariably ‘black and blue’ after a day’s campaigning.

In 1910 on what became known as Black Friday, 200 suffragettes outside parliament were beaten and assaulted for several hours, with police targeting their breasts, and lifting their skirts, making sure the crowds could see.

With the stakes being so high, it’s impressive that disabled suffragettes put themselves on the front line.

The redoubtable May Billinghurst had been left paralysed from the waist down by a childhood illness. She became a fixture of suffrage demonstrations, her state-of-the-art ‘invalid tricycle’ festooned with suffragette colours.

On Black Friday she was arrested.  It took three doctors and five wardens to make her submit to force feeding in prison – she lost a tooth when her mouth was violently forced open with metal pliers.

In 1914 police attacked her, and threw her into a side alley where a gang of ‘anti suffrage’ men was waiting.

To ensure she couldn’t escape, the police disabled her tricycle and left her there. As Billinghurst faced the men, she reflected that although she might very well be killed, it would be excellent publicity for the movement!

Her courage must have shamed the men, as they left her unharmed.

She continued to attend protests and learned to use her tricycle like a battering ram, driving as fast as she could at lines of police and counter-protestors attacking women, like a latter-day Boudicca.

The huge contribution of Asian women to the suffrage movement must not be overlooked, either.

Indian princess Sophia Duleep Singh was Queen Victoria’s goddaughter and lived in a grace and favour home in Hampton Court (after being exiled from India when the British annexed her father’s kingdom) but this didn’t  stop her becoming a thorn in the side of the establishment and selling the Suffragette Newspaper outside Hampton Court. Letters from the Home Office in 1913 reveal they seriously considered evicting her.

She also refused to pay taxes: ‘When the women of England are enfranchised I shall pay my taxes willingly. If I am not a fit person for the purposes of representation, why should I be a fit person for taxation?’

Lolita Roy, wife of the director of public prosecutions in Calcutta, and Bhagwati Bhola Nauth were among the other prominent Indian suffragettes whose ‘beautiful dresses’ (saris) apparently drew admiring glances from the public on processions.

Whilst highlighting that there was so much more to suffrage than the Pankhursts, we mustn’t forget the marvellous Sylvia, expelled from the WSPU by her own mother and sister for her insistence on organising with working class women.

A true socialist, Sylvia admired and respected the women she lived and worked with in London’s East End. Together, they formed the East London Federation of Suffragettes (ELFS), building a Women’s Hall with cost-price restaurant for local families and a toy factory to provide a living wage for women whilst husbands were at War.

The ELFS set up newspaper the Women’s Dreadnought, which employed Claude McKay, the first Black journalist in Britain.

Sylvia asked McKay to help expose the racism present in British society, and in a blistering 1920 piece, published under a pseudonym, he called for workers to unite across the false divisions of ‘race’ to tackle their real class enemies.

So incendiary was this considered, Pankhurst was arrested under the Defence of the Realm Act. She refused to give up McKay’s identity, even when sentenced to 6 months’ hard labour.

Although she was released on appeal, she had been fully prepared to serve time rather than give up McKay: ‘This is a wrong system, and it has got to be smashed, and I would give my life to smash it.’

Pankhurst went on to be one of the first British anti fascists, understanding the threat of it as early as 1919, and actively organising against it

When I talked about women like these last year in a sixth-form college, a young Muslim student said something that struck me – that hearing about them had made her feel ‘better about myself’.

We can ‘stand on the shoulders’ of these giantesses, and strengthen ourselves with their example, once we know and repeat their stories.

Read Louise Raw’s account of the Matchwomen’s strike, Striking a Light: the Bryant and May Matchwomen and their Place in History