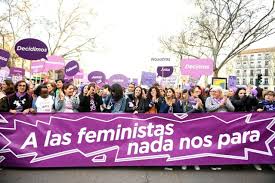 The letter, titled “There are feminists in Podemos too” is translated below.

There are feminists in Podemos too

We, the undersigned, want to express our deep concern about the way in which the issue of the so-called “Trans Law” is being addressed in the party we represent and / or in which we are active.

In the first place, we are obliged to denounce that, although the text of the draft published by the Ministry of Equality has been promoted by and agreed with all organizations in defence of trans people, it has not been subject to debate in any organ of the party nor with the grassroots. Moreover, we denounce the fact that from the Feminist section of the party, at the state level, a unique and immovable position has been imposed on the “Trans Law” that is not necessarily coherent with that of the entire party or with that of many of the women in charge of the areas of Feminism in the different territories of our country.

For this reason, we demand a public and internal debate on the implications of gender self-determination policies, and that the warnings of professionals from the different areas of study and knowledge involved in this matter be taken into account. Likewise, it seems to us a serious mistake not to take into account the effects that similar laws are already having in other neighbouring countries, where they are already beginning to be questioned, in some cases rectifying them. Nor do we understand the urgency of the approval of this Law without debate. Saying that “rights are not debated” is a form of authoritarianism that does not fit with the idiosyncrasies of any democratic organization and that we cannot share or allow.

Since its inception, Podemos has also prevented a calm debate on prostitution, despite constant requests from activists. Still to this day, Podemos does not have an official position on the matter, even though it is a key issue on the Feminist agenda. And the same can be said of the buying and selling of babies and pornography. This shows that the priorities indicated by Feminism are not for our party, and that instead ideas, concepts and demands diametrically contrary to the interests of women are imposed.

We are surprised and shocked at the behaviour, both by action and by omission, of the Ministry of Equality and members of Podemos in the face of attacks against women who raise their voices and express an opinion contrary to this draft Law. From here we stand in solidarity with them and we greatly appreciate your courage and commitment. In Podemos, we are many feminist women who come to this party with the firm hope of seeing our historical demands represented and our rights protected; women who understand that our oppression is based on the sex with which we come into the world and that this constitutes an observable and verifiable biological reality that we cannot ignore or twist if our intention is, indeed, to achieve the liberation of women. We know that gender is a social construction that functions as a tool that allows, sustains and perpetuates this oppression and that only its abolition will allow us to break with the patriarchal structure that keeps us subordinate and vulnerable.

We are aware, therefore, that the theories that come to contradict what is endorsed by more than three centuries of feminist struggle not only have nothing to do with the positions and objectives of our agenda, but also slow down and weaken our progress by seriously risking everything achieved so far by our predecessors. We are clear that the irruption of queer theories in our spaces constitutes a clear entryist manoeuvre that aims to dismantle our struggle, depoliticizing and weakening our collective strength, making magical thinking and pure individualism its weapons to manipulate reality at will. We cannot allow it to be questioned that it is we women who constitute the political subject of Feminism. As defenders of Human Rights, feminists have always supported social and political struggles for the rights of all individuals and groups, without this having anything to do with Feminism ceasing to be what it is: a movement that fights for our liberation as a sex class. Therefore, we must be firm and forceful in that Feminism cannot and should not become a bag in which to store things that have nothing to do with its reason for being and that collide head-on with its objectives. Nor can we look the other way as to the implications that the draft of the “Trans Law” has for children. It is unacceptable to disguise as protection the outright mistreatment of children that is sustained by queer irrationality, defended in the document presented by the Ministry of Equality and endorsed by Podemos. Orienting minors towards hormonal and surgical processes, preventing the free development of their personality, perpetuating sexist stereotypes, is something that we cannot tolerate.

Therefore, we request that the position expressed both by the different theorists of Feminism and by numerous feminist organizations be taken into consideration by the Ministry of Equality. We consider, in fact, disrespectful and irresponsible to have ignored their requests for a meeting, and we urge Minister Irene Montero to sit down and dialogue with these organizations in order to bring together positions in a Law that protects transgender people without undermining their rights of women or childhood.

The original Spanish text can be found here.

The statement by Izquierda Unida can be found here