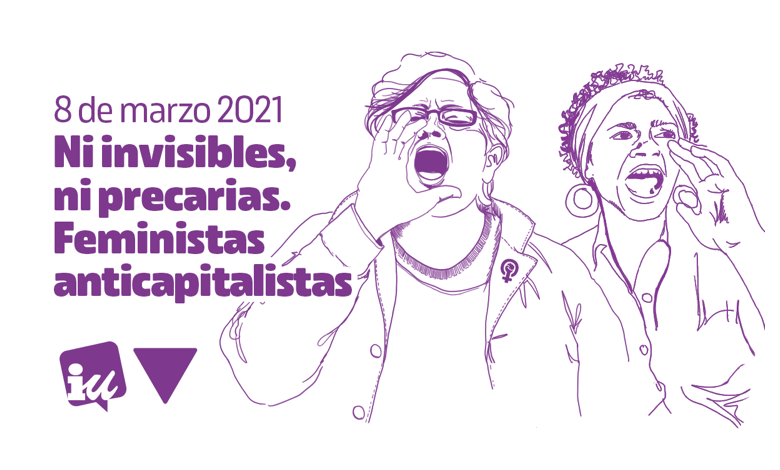 Izquierda Unida (United Left) is a Spanish coalition bringing together various left wing parties including the Communist Party of Spain. The following open letter was published in March 2021.

This statement arises from the concerns of the feminist activists that make up the United Left coalition and its parties, about the ideological turn that institutional policies are taking in the area of ​​Feminism.

The first blow to our coalition was the disappearance of the women’s section of our movement. This was followed by the expulsion of the Feminist Party from the coalition and, more recently, the proposed “gender self-identification” law, known as the Trans Law. The draft of this law was put out for public consultation with insufficient time for debate, and without taking account of the relevant stakeholders or the legal, educational and health issues involved.

Feminism has always been an integral part of our political identity. Feminism has united all women in our struggle to achieve real equality in the Spanish political sphere. In Spain 50 women are killed as a result of male violence every year. We are the country that consumes the most prostitution in Europe –and third in the world. This is a fight that we cannot walk away from.

We also face neoliberal doctrines that permeate our policies, generating splits and attacking hard-won rights, not only by women, but by other groups. We also face the threat of the regulation of prostitution or surrogacy, which only deepens a deep wound of gender and class inequality and slavery.

We want to point out that the Ministry of Equality’s draft law, which we see as an attempt at entryism into the left, not only fails to expand the rights of transsexual people, but actually leads to the “erasure” of transexuals, LGB people, and women. It would have the effect of altering statistics, emptying them of political content, and undermining the rights and freedoms of these groups.

Our feminist movement is 300 years old, with a clear abolitionist agenda (prostitution, pornography, surrogacy and gender), and with the aim of eradicating all violence against women nationally and internationally. In response to our feminist movement, we have recently seen a tendency to defend ideas grounded in regulationist and neoliberal thinking and gender ideology, which have nothing to do with those of our coalition, the United Left, or its component groups.

Faced with policies touted as a solution to discrimination and defending human rights, the self-determination of “gender” is a threat to the rights of women. Women who have throughout history faced discrimination based on their biological sex. There is talk the “erasure of women” because we can no longer talk about women and we see legislation being used to curtail women’s freedom of expression and rights. Laws that favour “the free self-determination of gender”, and therefore the erasure of biological sex, lead to changes in statistics and equality policies and they leave women even more vulnerable to male violence.

Furthermore, the testimonies of detransitioners and LGB feminists around the world show us that free self-determination of gender also affects transsexual people and accentuates homophobia.

It is for these reasons that we demand a deep, honest dialogue, involving all parties, so activists, supporters and voters can participate in a debate in society about these policies and what they mean for feminism and other social struggles.

Postmodernism and neoliberal policies are not abolitionist, and they have no part in who we are or in our struggle.

We, the undersigned, oppose these new policies which are taking over and dismantling the feminist struggle and ask that these debates be opened up to the grassroots and to wider society.

The original Spanish statement can be viewed here and signatures can be added until 14th March 2021.

The Statement by women in Podemos, “There are feminists in Podemos too” can be viewed here.