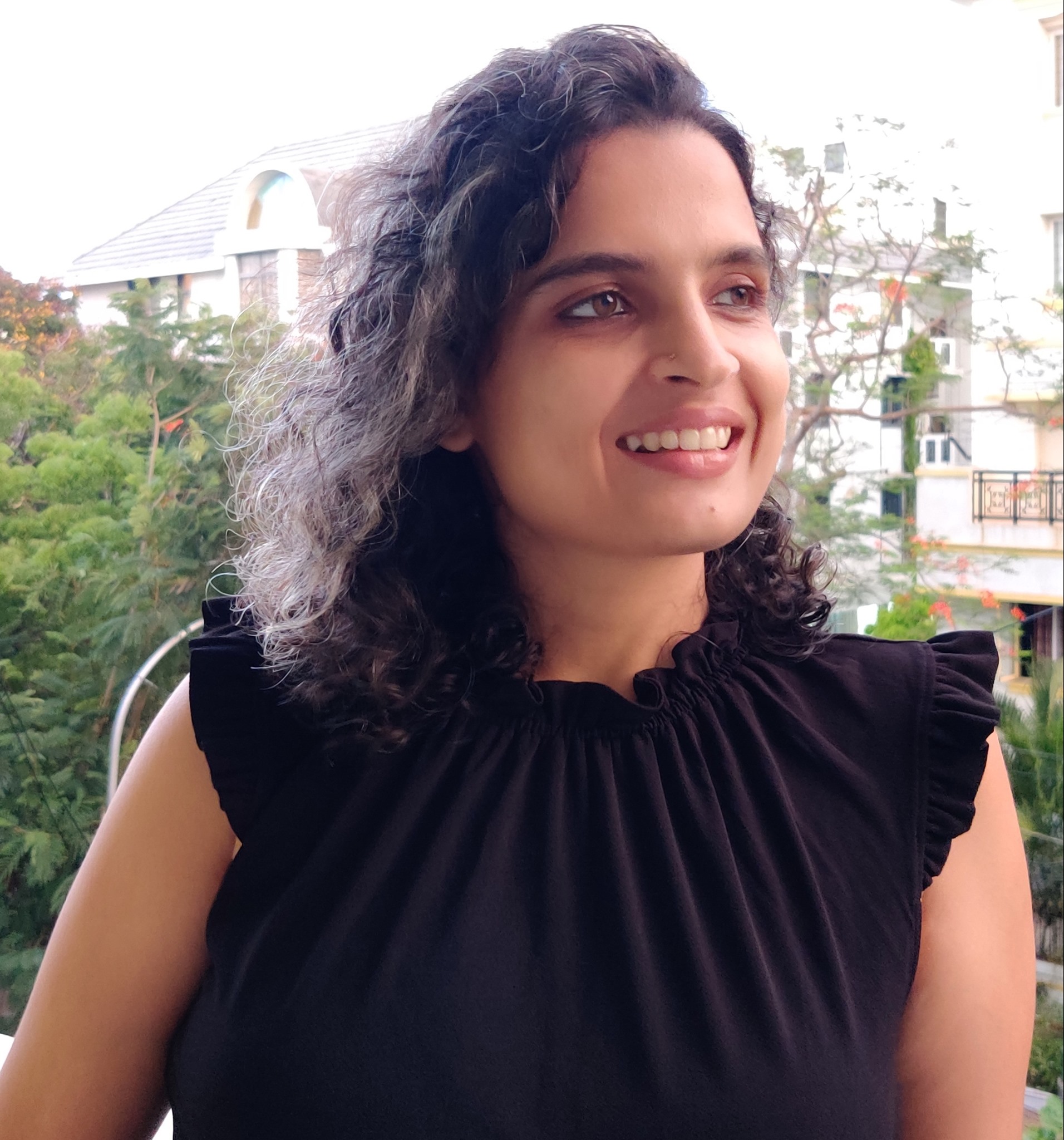 The founder of Women Making Movies and the production company Lime Soda Film, Vaishnavi Sundar released India’s first feature-length documentary on workplace sexual harassment titled But what was she wearing? and recently launched a four-part documentary which tackled the increase of gender dysphoria among girls and young women titled Dysphoria. Today we publish an interview with Vaishnavi Sundar, focusing on her social background and the material reality of sex-based oppression that galvanised her to become a leading light in feminist filmmaking worldwide.

International Women’s Day commemorates the history, achievements and struggles women and girls around the world continue to face. We mark the occasion by interviewing Vaishnavi Sundar, a self-taught filmmaker from the south of India. She left a comfortable, corporate job to dedicate her life to creating hard-hitting feminist documentaries that shed light on the realities of women from her country, and how they connect with women globally.

Raquel Rosario Sánchez: Let’s start from the very beginning. You are a young woman from Chennai, India. What was it like to grow up as a girl and to become a woman in your community?

Vaishnavi Sundar: I have often wondered how life would be if we were ignorant of the prejudices that our family and society place upon us as young girls. Because I find it incredible how, even at a tender age of five or six, our brain can tell us when something doesn’t feel right. We may not have the words for it, nor the power to resist said prejudice, but we can still identify it. I suppose you can say I grew up in a house where such red flags were constantly buzzing. And when you grow up understanding that your position in a group is inherently inferior, you become a woman rather soon; for there is barely any childhood left to be a child.

Like most Indian women, I encountered an unbelievable amount of street harassment, abuse in public transport on my way to and from school or college. Not to mention having to endure the molestation of a family member who maintained that he was faultless till the very end and within a family that believed him. That being said, I was also quite fortunate to have many privileges in comparison to many: I was able to get an education, and lived in a modest yet comfortable home. This means that I’ve had a complicated, yet available support system.

RRS: When did you become aware that being a woman had a distinct implication for you?

Vaishnavi Sundar: In our family, men always ate first. Sometimes children ate among them, but never all of us together. Women always ate in the end, and they are also responsible for cooking/cleaning after. In our family home, there used to be a ritual where men would finish eating (we always ate sitting on the floor) and I was expected to clean the space with the palm of my hand, picking morsels of food spilt around. None of the boys were asked to do this. None of the boys were allowed to – as much as – touch the rag cloth, or the broomstick while girls were chided for not keeping the house clean enough.

I hated this cleaning routine. I felt that it was so humiliating but I couldn’t argue or berate their archaic practices. I carried on this way, without protesting for almost my entire childhood.

The other practice that made me realize being a woman had a distinct implication for us was to keep menstruating women away during the 4-5 days when we had our period. We were fed alone, made to walk around the house and not through the house. We were considered unholy and there was a belief that the blood between our legs would allegedly offend the gods.

This sort of practice is far worse in countries like Nepal. You would have heard of girls dying in ‘menstrual huts’ where they live in isolation, sometimes under pouring rain or during burning summers. Growing up, I kept wondering why instead of taking extra care of me during my most painful time of the month, my community was shunning me away. It was common practice in many houses and I’ve known girls who often take medications to avoid getting their periods altogether to prevent this ostracisation. All for the sake of wanting to be treated like a normal human being.

RRS: Was this when your political consciousness kicked in? Tell us about your feminist awakening.

Vaishnavi Sundar: No. Despite these experiences, I was not exactly having a feminist awakening. Or rather, I didn’t know that is what I was supposed to call it. It wasn’t until much later on when I tried to understand why I stayed in an abusive marriage for six years that a lot of society’s inequities clarified themselves.

This was also a time I battled depression and tried to find my place within the women’s rights movement. In the beginning, I too gravitated towards the ‘choice’ feminism model and chanted away (virtually) along with the liberals. I thought giving women complete autonomy would be the truest form of liberation. I was still begrudging the inclusion of prostitution and pornography in this strand of the ‘feminist’ movement, but as someone who had just come from such a highly patriarchal background, I picked every bone liberal feminism threw at me and pretended to be okay with misguided and misogynistic notions.

Later, thanks to a very simple conversation with a dear friend who wasn’t ashamed to call that form of ‘feminism’ for what it was, talked me out of it. It was as if a light went off in my brain. I immediately felt lighter and clearer in my thinking.

RRS: You have recently launched a documentary called Dysphoric about the increased gender dysphoria among girls and young women. Tell us about the moment when you decided this was something you wanted to document and produce?

Vaishnavi Sundar: ‘Dysphoric’ is a four-part documentary series on the rise of gender identity policies and ideology, its effects on women and girls, particularly focusing on the impact this issue is having in developing countries. The past decade has seen a steep rise in the number of young girls seeking to transition by undergoing life threatening, irreversible procedures.

The film explores the gender transition girls want to do with the intention of changing their sex, the permanent medical side-effects of hormones and surgeries, the propaganda by corporations appealing to a ‘woke’ culture that glorifies stereotypical gender presentations coalesced as fashion, a surge in pronoun policing, the hijacking of language by calling women ‘menstruators’, and the many hurdles women face while trying to question modern-day misogyny. The film amplifies the voices of detransitioners, clinicians, psychiatrists, sociologists, feminists, academics and concerned citizens.

RRS: What would you say to politicians who are currently advocating for “gender identity” policies in Global South countries?

Vaishnavi Sundar: I would demand them to stop erasing women. We didn’t fight all these wars for centuries only to go back to square one! With the added prejudices meted out on women in Global South countries like caste, class, skin colour and religious oppression which are still rampant, we do not need yet another problem to fight.

In India, the mainstream takeover of ‘gender identity’ policies started very innocently, in the name of inclusion and acceptance or tolerance. And I want to be absolutely clear that I believe there should be no scope for intolerance towards any section of the society. But I strongly believe the rights and civil liberties of one oppressed group should not be at the expense of another.

RRS: In your Dysphoria documentary, you spoke movingly about the challenges of girlhood, growing up in a conservative family. What would you say to your 12 year old or 14 year old self?

Vaishnavi Sundar: I am not sure. I feel very sad when I think about her. I am not at all maternal and would prefer a lot of animals more than a human child. But, if there is one child I wouldn’t mind spending some time with, that would be my 3 or 4 year old self until such time she is independent, without all the self doubts, body image issues, dysmorphia, abuse and loneliness. As an adult, I am still unsure how to cope with all these issues myself, but maybe we can make each other strong. I have a fiction script along those lines, but that’s for another conversation.

RRS: Finally, what would be your paragraph pitch for why people should watch Dysphoric? Particularly to an audience not familiar with this issue.

Vaishnavi Sundar: In this dystopian world where misogyny is rampant, and womanhood is commodified, being female comes at a cost. Corporations capitalise on women’s bodies blurring the lines of biological sex, and profiting from the empirically untested, pseudo-science of queer theory. This gaslighting is aided by the complicity of media, academia, legal and the political world. It is no surprise that young girls are fleeing womanhood like a house on fire. While we should have invested ourselves in telling girls that they are perfect the way they are, we have poked on the wounds caused by her femininity and offered a way to be a boy instead. While this may seem luring at the face of it, reality is far from happy – and watching my film would help people come to terms with all of that.

You learn more about the work of Lime Soda Film and watch Dysphoria on YouTube using English, Spanish and French subtitles. You can also donate to fund future feminist projects by Vaishnavi Sundar.

You can read more interviews by Raquel Rosario Sanchez here:

Lidia Falcón: “Women are being erased from the law and public policy”

Against the erasure of women: interview with Spanish feminist and politician Angeles Álvarez

“Femininity is a reactionary ideology. It has nothing to do with the rights and interests of women”: Tasia Aránguez Sánchez