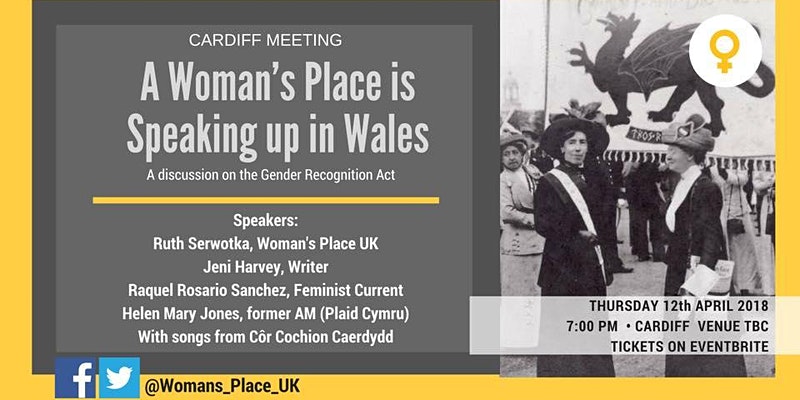 On Saturday 6th March, The National Wales, published an article which reported that Helen Mary Jones, a Plaid Cymru AM had been accused of transphobia. One example of this alleged transphobia was that Jones spoke at a Woman’s Place UK meeting in Cardiff. Several allegations were made in the article about our campaign, including some factual inaccuracies.

We wrote to the editor of the National on the same day to challenge veracity of the article. Four days later, we have had no reply. Our letter is published below.

Two factual inaccuracies have now been corrected. The misrepresentation of our campaign has not.

The transparent debate of public policy is a cornerstone of every democratic society. This is not possible when female politicians are routinely met with vilification and face ostracisim for defending legally-held sex-based rights

Last week, along with 13 other organisations, we wrote to the leaders of all the major political parties in the UK including Plaid Cymru leader, Adam Price. The letter called for a clear condemnation of  the violent threat against the Spanish Deputy Prime Minister, Carmen Calvo.

We have heard no condemnation from any of them.

It is not transphobic to speak up for women’s rights. And the right of women to speak up must be protected and defended.

We expect all politicians to defend this right.

We write to correct your article which makes false claims about Woman’s Place UK without evidence or comment from us.

Woman’s Place UK is a campaign committed to upholding women’s rights as enshrined in the Equality Act and ensuring women’s voices are heard in public policy and law making. We are not a hate group. We believe in the right of everyone to live free from discrimination, intimidation and fear.

Unfortunately, this principle is not being upheld for women speaking up for the rights of women and girls who are now routinely threatened and attacked. Misrepresentation of women’s views is actively contributing to a hostile environment for women in public life.

The press has an important part to play in reporting fairly on matters of public interest. We believe The National has failed in its obligations both to the public and to independent press standards.

If we had been contacted for comment, we would have been able to correct the misinformation you went on to print (including the misspelling of our campaign name).

This includes the claim that our Cardiff meeting was cancelled. It was not.

It was moved to a second venue after the first venue was intimidated into reneging on our booking. The hotel later apologised for its inaccurate social media statement about us. We note you have now amended the article to reflect this.

Another claim which attempts to discredit us is that we campaign for trans people to be denied access to women-only spaces. We do not.

We argue that single-sex exemptions, permitting males (irrespective of gender identity) to be excluded from women-only spaces, should be used where proportionate and are entirely legal. Our campaign is in line with provisions in the Equality Act which allow for the provision of sex exemptions in a wide range of circumstances.

You also seem to have misunderstood the provisions of the Gender Recognition Act which you claim we campaigned against. We did not.

The Gender Recognition Act does not currently permit self-ID and the government’s consultation was to see if self-ID should be permitted. Women had every right to meet and discuss the implications of such a change to the law and were actively encouraged by the Government to take part in the consultation. Our meetings were part of that legitimate public debate.

We are astonished that a news site such as yours would believe that women exercising their democratic rights is something to decry.

The footnote you have added to the amended version of this article claims to ‘give detail on the organisation’s position on trans issues’. We are not clear how you feel qualified to represent our position when you have made no attempt to contact us.

We hope we have clarified things for you and trust that you will now publish this letter by way of a right of reply.

We look forward to hearing from you

Watch the films of the speakers at our Cardiff meeting