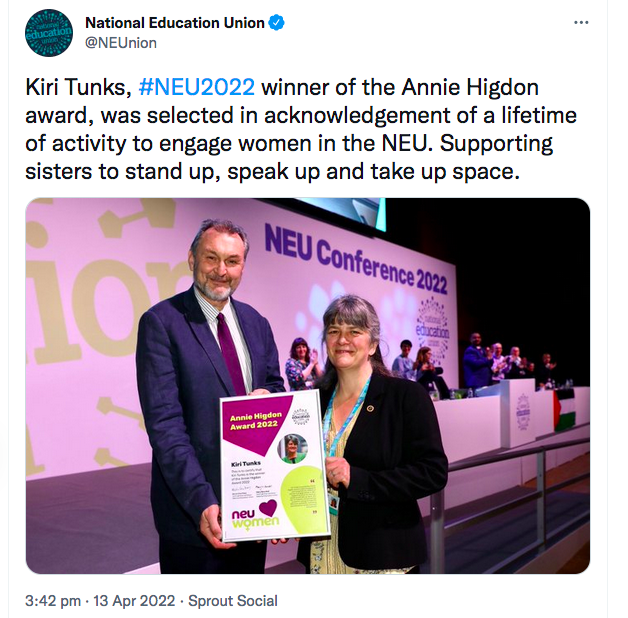 Read Kiri’s acceptance speech and find out more about Annie Higdon and the Burston School Strike.

We are delighted that our co-founder and director, Kiri Tunks has received the National Education Union’s Annie Higdon Award which exists to recognise and celebrate work to challenge sexism and engage women in the union.

The National Education Union (NEU) is the largest education union in Europe and the fourth largest union in the UK. It is an amalgamation of the NUT and ATL and has a membership of over 450,000 professionals working in a range of roles across education.

Kiri is a longtime activist in the NUT and NEU and is a former President of both.

Kiri received her award at the National Education Union’s annual conference which took place in Bournemouth this week. The citation read:

Kiri Tunks, #NEU2022 winner of the Annie Higdon award was selected in acknowledgement of a lifetime of activity to engage women in NEU. Supporting sisters to stand up, speak up and take up space. She has consistently and persistently pushed for change to make the NEU more accessible, welcoming and relevant to women members and activists.

Kiri has given us permission to publish her acceptance speech which we reproduce here:

I would like to pay tribute to all the other nominees and everyone else in the union who is doing the gruelling work of challenging sexism in the 21st century.

It’s work we have been doing for a VERY long time.

And, frankly, it’s a disgrace that this work still needs doing – and that it still faces opposition.

But we have never let a bit of opposition stop us so please keep going.

To all my sisters I say:

You will need to do what legions of women have done before you:

You will be attacked.

You will be undermined.

And you will face abuse and harassment.

But you will become stronger

And you will prevail.

To my brothers I say

But this is a fight that women have to lead so you need to listen to us – and don’t get in our way.

This award is named for Norfolk teacher Annie Higdon who, with her partner Tom, challenged the poverty of their children’s learning and living conditions in Burston, Norfolk.

They too faced opposition but they were supported by the children themselves who started a strike in their defence.

They also had the support of the children’s families and the wider community.

This was a strike that lasted 25 years and saw the establishment of a village school which put the needs of children first until its eventual closure in 1939.

You can join the commemorations of the Burston school strike every September. I know the Norfolk district would love to see you there.

Listening to the debates this week, it is clear we are still in that fight – to make education and our society places in which all our young people can flourish.

So I hope Annie Higdon inspires you much as she inspires me and that you are strengthened by this conference and the people you are with here.

I hope you can take that strength back to your districts, branches and workplaces and build this struggle in your communities.

Another world really is possible.  Thank you.

Annie Higdon was a WPUK icon in March 2018. We are so proud of Kiri being being awarded this honour bearing her name:

Annie Higdon (1864-1946) Progressive Head teacher at Burston village school Norfolk, sacked with her husband for demanding better conditions for the children. Led a strike for 25 years, setting up an alternative school, supported by the community and funded by trades unions. pic.twitter.com/EOFdZORGeF

This summary of Annie’s story comes from the National Education Union website:

“Annie came from a working-class family in Cheshire. She became a school teacher before she married, and later became headmistress at Wood Dalling, a village school in Norfolk. Her husband held a junior position though most of the documents, books and blogs about the pair do not acknowledge this.

Annie and her husband challenged authorities and pushed for improvements to the school building and learning environment. School governors resented the couple repeatedly raising concerns over the children’s welfare and organised a transfer to another Norfolk school; Burston. Annie’s final entry into the school log was expunged from the records because they it was considered to be political and inflammatory.

Popular with the community and the children of her new school, Annie lobbied the education authority for school improvements, including tackling damp cold classrooms and other unhygienic conditions. She and her husband clashed with the parish rector and school board. In 1914 the Higdons were dismissed (from their teaching posts) after accusations that Annie had lit a fire without permission and failed to curtsy to the rector’s wife.

Violet Potter, a student of the school, organised 66 children to walk out of school in protest. The pupils of Burston School marched around the village with cards hanging around their necks saying “WE WANT OUR TEACHERS BACK”. The banner at the head of the march said just one word: “JUSTICE”.

Refusing to go back to the school, the children were educated in makeshift school rooms around the village. Supported by the wider labour movement, as word of their struggle spread, supporters donated funds for a new, independent schoolhouse. Annie continued to dispute her dismissal for over 25 years. There has never been an official resolution to the dispute.”

History and Celebrations of the Burston School Strike

You can read more about the Burston Strike School here.

You can read more about Annie Higdon on the Trade Union Congress site.

The TUC commemorates the strike every September in Burston, Norfolk. This year the rally will take place on Sunday 4th September.

Sexism is widespread in our society and tackling it begins in our schools, Kiri Tunks, Morning Star

You ignore us at your peril, Kiri Tunks, Labour Women’s Declaration ‘Expel Me’ Rally, 10th March 2020