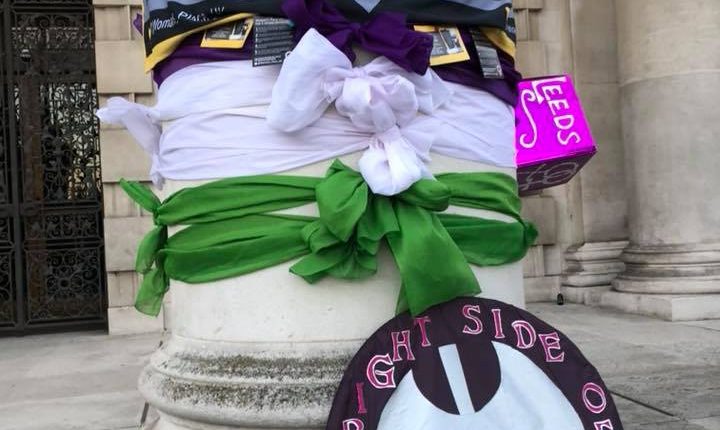 On 20th May 2019, we published our draft manifesto and asked for responses. Thank you to everyone who suggested amendments or ideas. We are delighted to publish a revised version of the manifesto.

We want to get this to every MP, MSP and AM in the country.

If you agree with our demands, please make sure your political representative sees a copy.

Woman’s Place UK is a group of people from a range of backgrounds including trade unions, women’s organisations, academia and the NHS. We are united by our belief that women’s hard-won rights must be defended.

We are against all forms of discrimination. We believe in the right of everyone to live their lives free from discrimination and harassment. Women face entrenched and endemic structural inequality. This is reflected, for example, in the high levels of sexual harassment and violence against women and girls; the ‘gender’ pay gap; discrimination at work. This is why sex is a protected characteristic in the Equality Act (2010) which we believe must be defended.

This is what we want.

Take action to achieve equal pay, such as compulsory equal pay audits, the collection of sex disaggregated data and better enforcement of the Equality Act 2010.

Introduce, as a right, a Citizens’ Pension based on the Dutch tax-funded model, payable at state pension age to each long-term resident and set at the Minimum Income Standard.

Improve access to the labour market for women and an end to occupational segregation.

Prohibit redundancy in pregnancy and maternity; increased rates of Statutory Maternity Pay and Maternity Allowance, the right to breastfeed at work, and reinstatement of Sure Start grants.

Introduce a day one right to flexible working.

Overhaul of the Universal Credit system to:

Restore the link between Local Housing Allowance and average rents.

An end to violence, harassment and abuse of women and girls

Recognise prostitution as sexually abusive exploitation which is harmful to all women and girls.

Implement the abolitionist model, criminalising those who exploit prostituted people (including pimps and sex buyers) and decriminalising the prostituted, providing practical and psychological exiting support.

Highlight and tackle the harms of pornography including the exploitation of women in its production and the hostile culture it creates for all women and girls in society.

Free access for all women, including women in Northern Ireland and migrant women, to NHS services, including maternity care and abortion services.

Fund research and national collection of sex-specific data on women’s medical needs and the provision of woman-centred healthcare.

Implement the NHS strategy of Elimination of Mixed Sex Accommodation in hospitals.

Commit to uphold right to request a female clinician, carer or support worker and to have that request respected.

Female-only services for those with sex-specific conditions, mental health, drug and alcohol problems.

Challenge the bias in design and research which is based on a male standard to ensure that the sex-based needs and health and safety of women are properly addressed.

An end to the provision of education by lobby groups and untrained or unregulated providers in all state schools and colleges. All external providers should conform to a statutory code of conduct and comply with the law including the Public Sector Equality Duty.

Introduce a duty on schools and colleges to challenge harmful gender, sex and other stereotypes.

Include women’s history and women role models as part of the statutory curriculum.

Address barriers to, and encourage representation of, women and girls in STEM and other male-dominated subjects.

Restore funding for adult education, Further Education, English as a Second Language, Higher Education, recognising the disproportionate impact these cuts have had on women.

Robust defence of the human right to freedom of speech in academia.

Take action to end sexualised violence against girls and women in education, and train teachers to tackle VAWG in schools, colleges and universities.

As a minimum, protect the human rights and laws we currently enjoy as European citizens.

Strengthen the Equality Act by restoring the statutory questionnaire; the duty to protect from third party harassment; and the power of tribunals to make wider recommendations. Enact Section 1 to compel action to reduce socio-economic disadvantage.

Enforce Public Sector Equality Duty and Equality Act, including duty on government and local authorities to carry out equality impact assessments of all new legislation.

Properly resource the Equality and Human Rights Commission (EHRC) to ensure effective oversight and enforcement of the Equality Act by including clear guidance on the existing legal protections for single-sex services and a commitment to strengthening them where necessary.

Defend women’s bodily autonomy and decriminalise abortion across the UK, including Northern Ireland.

Better treatment by police and criminal justice system of women survivors of male violence and harassment as well as improved access to justice.

Ensure equal access to the social security and criminal justice system for all women who have experienced domestic abuse, including migrant women, regardless of their immigration status.

End the practice by the criminal justice system of allowing offenders to self-identify their sex – particularly in relation to violent and sexual offences.

For a woman-centred approach

Better support and protection for women prisoners, including pregnant women and women with mental health issues.

Implement the recommendations of the Corston and Angiolini reports and reduce the imprisonment of women.

Effective resourcing and implementation of community-based sentencing for women offenders. Where women are housed in the prison estate, accommodation must be single-sex to protect their privacy, safety and dignity.

End the detention of children and pregnant asylum seekers.

Provide adequate levels of legal aid for criminal cases, restore civil legal aid as well as aid for all immigration and asylum cases.

Representation and participation in public life/media/culture/politics/sport

Increase representation of women (especially black and minority ethnic, working class, disabled, older, younger and lesbian women) in all walks of public life, including political activities and the labour movement.

Defend the use of sex-based mechanisms such as all-women shortlists.

Action to end sexist, demeaning, objectifying, stereotypical images of women and girls throughout society and in particular in media, arts, advertising and the political sphere.

Proactively encourage women to participate in sports, leisure and the arts. Women’s and girls’ sport should be funded to the same level as men’s and boys’ from school to elite sports.

Support for sex-segregated sports, promoting a level playing field for competitions and encouraging and recognising the excellence of female competitors.

Women should be supported to pursue their right to freedom of association, as enshrined in the Universal Declaration of Human Rights.

Write to your political representative

Read our original demands and our resolutions for 2019.