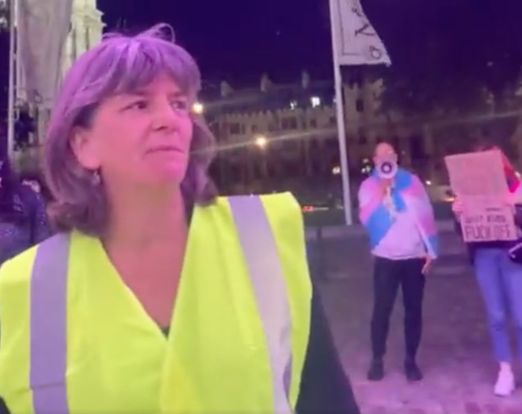 After attendees, staff and volunteers were subject to an abusive protest at our recent meeting, A Woman’s Place is NOT in prison, we have written the following letter to the Socialist Workers Party (SWP) calling on them to repudiate racism, misogyny and other abuse at any protests they are associated with.

As this is a matter of great importance for feminists, socialists, people of colour and trade unionists we feel it is essential that any exchange of views is in the public domain.

This blog contains details of misogynistic, racist and other abuse.

Your paper’s coverage of the protests against Professor Kathleen Stock at the University of Sussex made it clear that the SWP believes it is legitimate for women who recognise that sex is a material reality to be harassed and intimidated at their workplace. The protests have now resulted in Professor Stock being obliged to leave the university. While the piece does say that women like us should not be driven out of our jobs, it gave a signal to your members that they have your organisation’s support if they take part in such protests, whatever the professional or personal impact on the targeted woman.

D, who identifies as an SWP member on Twitter, organised just such a protest at our public meeting A Woman’s Place Is (Not) In Prison on Wednesday October 27th at the QE2 Centre in London.

D’s public Twitter feed encourages people to join the SWP. D has retweeted statements suggesting that protesting at events like ours is a form of “anti-fascist solidarity”. The same individual also tweeted the time and location of our meeting encouraging people to protest at it and described Joanna Cherry MP and women who share her opinions as “absolute Nazis”.

Almost 600 women had bought tickets to hear an all-woman panel discuss how prison punishes women for being poor, violently abused and vulnerable. It was a meeting which would have been of interest to any socialist or feminist as it was discussing the cruelties of the prison system and alternatives to it for vulnerable working-class women.

There were only about six protestors and videos of them are circulating widely online.

Our event coincided with a conference for Black people in business as part of Black History Month.

People attending our event and the Black business meeting, venue staff and our stewards were subjected to the most extreme outpouring of racist and misogynistic abuse. The apparent organiser and leader of the protest, D, and the SWP by association, bear responsibility for the protestors’ language and behaviour.

These include comments such as:

“Shut the f*ck up, you c*nt” shouted into the face of our chief steward.

“Call Weightwatchers, your body’s not doing it.”

“Your hair is minging, buy a weave.”

“Are you a lesbian? No man would want that.”

“Your breasts are on the floor, buy a bra and some hair dye too.”

“I have a better body than you. Like, you have no bum. How do you sit down? What kind of man would want you? A blind man?”

“We don’t want pensioners. We don’t want dinosaurs like all you lot. You are not going to be around in 40 years. Well, 40’s a push.”

To people arriving for the Black Business event (who did not interact with the protestors):

“You went through slavery, you went through discrimination, rape, sexual harassment, the slave masters raped and sexually abused you and now you are abusing me, as a trans woman?”

“You were persecuted. You were nothing under slavery.”

“You look me in the eye. Your ancestors went through slavery and you are here. Hang your head in shame. Slave Master! Yes! Slave Master!”

“You call yourself Black people?”

We are asking that the SWP openly stands up to racism and misogyny organised and facilitated by one of its members. As a self-described socialist taking part in the protest and someone who has spoken on behalf of Stand Up To Racism, D had a duty either to tell his collaborators to stop the racism, misogyny and offensive behaviour against women at the venue or to walk away from it. D did neither but instead contributed to it.

It will be apparent to you from watching the videos that our activists refused to engage with the abuse. We are committed to respectful debate on questions of sex and gender with people who disagree with us.

The intimidation to which we were subjected by people who are practising what you preach will not prevent us from organising other major events in the coming months.

We are part of a resurgent women’s liberation movement to which your group is hostile. We accept that, but we would like an assurance that if your members take your paper’s advice and protest against us that they will not permit abusive, racist, misogynistic behaviour at mobilisations for which you are politically responsible.

Some of our activists work alongside SWP members in unions and campaigns. This is an impossible relationship to maintain if people in the SWP are saying in public that we are equivalent to fascists. If this is now the approved position of the SWP it needs to be stated explicitly. If it is not, that also needs to be stated explicitly, if only for the benefit of your members who seem unclear on the question.

The best way for your organisation to do that is to publish a public statement unequivocally repudiating racism, ageism and misogyny which will remind your supporters that they are unacceptable in every circumstance.

The SWP have made this statement in response to our open letter. We are considering our response.

Other relevant responses and articles:

The student bullies who targeted Stock succeeded only because half the job had already been accomplished. Although Sussex has recently shown admirable strength in backing her, for a considerable time before that her colleagues had attacked her on social media without apparent consequences. The University and College Union, which perhaps ought to be concerned by the public bullying of a lecturer, has only issued statements affirming its support for trans rights. Perhaps it should clarify whether that includes the “right” to destroy a woman’s career.

Serious politicians (and Keir Starmer) who spout homilies about how trans people are society’s most marginalised seem not to have noticed that an awful lot of direct action by the trans movement consists of shouting at women (and often, as in the case of Stock, lesbians, who bear the double brunt of sexism and homophobia) in the hope they’ll shut up and go away.

A conference held by the organisation Woman’s Place UK on female prisoners last week was picketed by trans activists calling the women inside fat, ugly and old. Who knew that 1970s working men’s club comedians were writing the script for the gender revolution all along?

Lindsey German criticises the attacks on Kathleen Stock and others who share ‘gender critical’ views. She also criticises the abusive protests at meetings organised by women. Here is an extract:

It is not acceptable to use sexist, ageist and racist abuse, as seems to be the case from video evidence, against women. It is not acceptable to comment on their looks, the shape of their bodies, or anything else. We have spent decades now fighting against stereotypes of how women are supposed to look and behave, and it is still an uphill battle. How appalling then that people on the left, in the name of supposed solidarity with the oppressed, feel it is justified to join in with these right wing views.

Let’s be clear here: gender critical women are not fascists – they are mostly left wing. They should be allowed to organise as women without being abused and intimidated. And if you think that doing otherwise is helping fight oppression, you really are in a bad place. This has to stop – the only people it is damaging is the left.

A week of trimph and setback for English feminists, Socialist Democracy, 28th October 2021

Watch the films of the speakers here:

We have also published this blog Transgender prison policy: women prisoners speak out

The films of the other panellists will be published shortly

Time for a left wing defence of academic freedom

What Jacobin gets wrong about Woman’s Place UK

Misfortune: the Left’s betrayal of women and Marxism