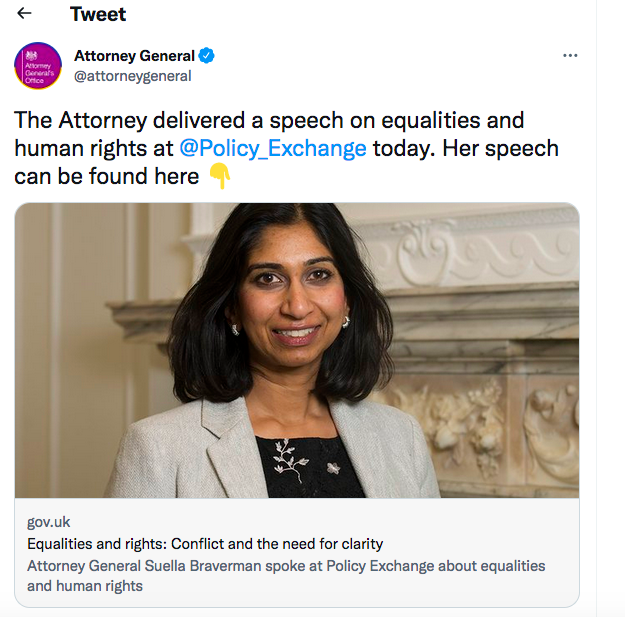 Woman’s Place UK welcomes the clarifications on sex-based rights in the Equality Act (2010) made in the Attorney General’s speech to Policy Exchange. The statement makes clear the absolute legality of women accessing, and organisations providing, single-sex services and spaces where to do so is a proportionate means of achieving a legitimate aim.

Affirming this legal right as fact was the main driver in our decision to establish Woman’s Place UK back in September 2017 as is clear from our original five demands.

We were not alone in getting organised and we pay tribute to all the women who have had to set aside time, energy and resources to establish what we should have had in practice. Some women have been fighting this battle for much longer.

Many of us have faced abuse, ostracization, attacks on our livelihoods and reputations. We did not expect that asserting our rights would be contested in the 21st century and we are pleased that our arguments are now being taken up by the political and legal estate.

However, we do not share the Attorney General’s framing that European Human Rights legislation is to blame for this state of affairs.

The truth is the blame lies firmly at home.

Women and girls have been badly let down by our own civic and political institutions and representatives.

Far too many politicians from across the political spectrum have demonstrated a willingness to steamroll through changes in the law without proper discussion, debate or consultation of all stakeholders:

Indeed, some of those politicians have been active participants in the witch hunts that we are now all so familiar with.

Neither have we forgotten that it was a Conservative MP, Maria Miller, who in 2016 proposed changes to the Gender Recognition Act (2004) that would have undermined the very rights that the Attorney General is now so keen to protect.

It is a relief that the government has seen sense but we are clear that their repositioning has only come about because of the tireless and difficult work done by women (and some men) to publicise and challenge what was being proposed.

The fight for women’s rights

While the Attorney General’s speech celebrates “a rich heritage of rights in the UK”, it is surprisingly coy about the pivotal part ordinary citizens played in winning them. While it is true that these rights are ‘inherited’, we must not forget that they were gifted to us by previous generations who fought for them.

They were never the gift of government.

Nor is it the case that people won these rights simply by asking. They didn’t just call for their rights. They organised and protested. Sometimes they broke the law.

Take the fight for women’s suffrage: women were not simply given the vote as implied in the Attorney General’s speech. They fought for it. Many women were imprisoned and tortured. Some of them died.

All the rights we have were won by people who came before us; people who were demonised and attacked until the point at which their arguments won mass support.

The parallels with this debate are clear.

We were alarmed to see, in the same speech, the Attorney General link the reaffirmation of existing women’s rights to further restrictions on immigration and the right to protest.

As anti-racists and socialists, we are strongly opposed to our struggle to retain sex based rights being linked to a policy agenda which may undermine the rights and interests of migrant women. Our 2019 manifesto called for migrant women’s human rights to be respected by ensuring that all women have access to social security and to services such as refuges and free NHS maternity care, regardless of their migration status.

We will continue to campaign on these and other demands for migrant women and girls.

Likewise, as a grassroots organisation we value direct action and the right to protest. We would be very concerned at any attempt by government at suppression of these civil rights. Protest and challenge must be a part of any society which considers itself a democracy because without it, there can be no progress.

We welcome the Attorney General’s assurances that there are no plans to repeal or scrap the Equality Act and her commitment to ensuring the correct interpretation of its provisions. She has unambiguously confirmed the legal status of the single sex exceptions in the Equality Act.

However, much more needs to be done to ensure that these rights are implemented to meet the needs of all women and girls. This will require clear and unequivocal guidance, robust monitoring and centrally-funded specialist support.

We are not confident that these these things will be delivered by the current Conservative government.

We want to ensure that women’s voices are heard in all areas of public life and that our rights are upheld in law and policy. These are our resolutions:

Women are still routinely failed by politicians, by organisations and by the law. Until we are confident that the voices of women and girls are heard and our needs are met, we will continue to speak up.

We are not alone.

Why do we keep banging on about the importance of single sex spaces for women who have been subjected to men’s violence*?