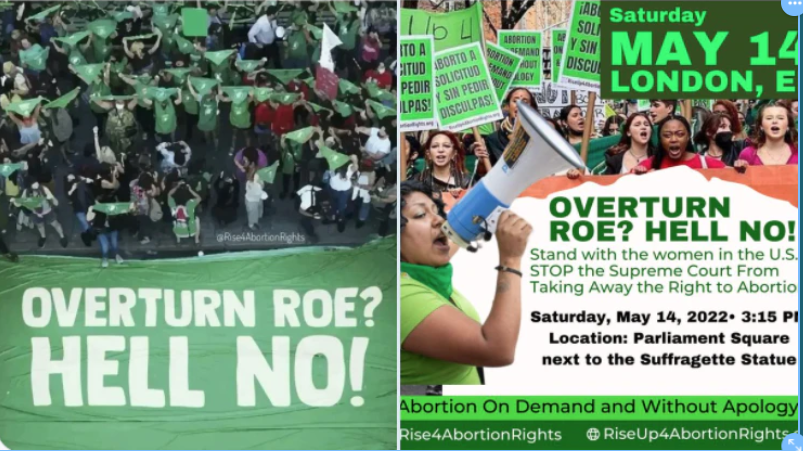 Katherine M Acosta is a lifelong feminist, a sociologist, filmmaker and writer. Divided We Fall is her documentary about the 2011 Wisconsin Uprising, a weeks-long protest to save collective bargaining rights for public sector workers. She was co-chair of the steering committee for Women’s Human Rights Campaign USA (now Women’s Declaration International USA) during its early formation. She blogs on Substack as ShesRightYouKnow.

You can read more from Katherine M Acosta on her substack https://katherinemacosta.substack.com

Woman’s Place UK is committed to campaigning for abortion rights. Our 2019 Manifesto calls for a) free access for all women, including women in Northern Ireland and migrant women, to NHS services, including maternity care and abortion services and b) defence of women’s bodily autonomy and decriminalisation of abortion across the UK, including Northern Ireland.

The daily assault on women’s rights and dignity in the US – from ever more cruel anti-abortion legislation, to yet another instance of a trans-identified male winning a women’s sport competition – takes a toll one isn’t fully aware of until something happens that alleviates cumulative tension and anger. So it was when I opened twitter the week of May 14th to see messages of support from the Radical Notion and notice of a solidarity abortion rights protest in London. I felt a rush of affection for women I’ve never met, a few of whom I’ve had the good fortune to connect with online. These gestures of solidarity buoyed my spirit all day.

They also took the edge off the irritation I experienced reading articles on the US abortion conflict by respected UK journalists Janice Turner and Helen Lewis. While sympathetic to our plight, both women profoundly misunderstand the political situation here. Turner and Lewis advise us to avoid polarization, seek compromise, and accept a ban on “late term” abortions. Turner describes America as:

“divided between those who think life begins at conception and some defending whole-term abortion. Surely, a broad-based campaign could alight on a sensible limit.”

Helen Lewis concurs, noting that a 24-week limit in Ireland “has proved to be a compromise most people can accept” and that “it shouldn’t be taboo to acknowledge the reality of principled opposition.” Lewis recommends presenting abortion rights as a “normie, majority position.”

Both Turner and Lewis cite Lena Dunham’s joke that she wished she’d had an abortion to decry what Turner calls a change in tone in abortion advocacy to one of “flipness.”

“[R]are” contained a sense of abortion being a last resort in a terrible predicament. This moral gravity helped keep within the reproductive-rights tent those for whom terminating a pregnancy is not ethically neutral.

Lewis advises highlighting the tragic cases of wanted pregnancies gone horribly wrong, claiming that “even people who are opposed to abortion on religious grounds will find it hard not be moved.”

Ireland’s citizen’s assembly ahead of their abortion referendum, which included “a representative sample of voters,” and “experts on the topic,” is described by Lewis as “a model of how to take a divisive issue and encourage a productive debate.”

This sounds wonderfully civilized, but far removed from the political reality here. The US abortion conflict is portrayed in these articles as a clash between conscience-stricken well-meaning religious people and implacable abortion rights activists who don’t have the wherewithal to find some common ground. If only these intemperate Americans, they seem to imply, could be a little more sensible, keep calm, and accept compromise, this could all be sorted over a pot of tea. The ruthless and sustained attacks on abortion rights over the last several decades, and the true motives and history of those orchestrating the conflict, escape the notice of our well-meaning advisors. In fairness, I can’t fault them too much; many Americans are similarly under-informed.

Let’s start with “late-term” abortions. In the US, 90% of abortions[1] are performed before twelve weeks, 9% after the first trimester, and 1% after 20 weeks. Third trimester abortions are “vanishingly rare”[2] and no one is advocating for this to become widely available. The notion that Democrats are extremists who support late-term abortions, and oppose any restrictions, is an old talking point recently re-circulated by Republican strategists.

“Normies” already support abortion rights and this is regularly reported in the news. “With almost no change in national public opinion over the past five decades,” a majority oppose overturning Roe v Wade, including 42% of Republicans.

Why, then, the controversy? Compromise rests on the assumption that both parties intend to work toward a reasonable middle ground. But our staunchest opponents seek to ban abortion outright and, eventually, most forms of contraception[3] as well. They knew they couldn’t achieve this through democratic means so they pursued an alternative route to impose their agenda.

The opportunity to realize their goal arrived with the election of President Donald Trump. Journalist Anne Nelson describes the crucial 2016 meeting with evangelical and Council for National Policy leaders at the Marriott Marquis in New York where Trump was given his marching orders:

When they all emerged, several elements of a major deal had occurred… There is an agreement that Trump would appoint federal judges to the Supreme court, circuit courts, and appeals courts, from a list… drawn up by the Federalist Society, the Heritage Foundation, the National Rifle Association.

Trump had the unprecedented opportunity to appoint three Supreme Court judges, in part because Senate Republicans disallowed President Barack Obama from appointing a replacement for Antonin Scalia, arguing that one year in advance was too close to the 2016 presidential election. The Republicans then turned around and ushered in Amy Coney Barrett, a Catholic from an extremist sect, just six weeks ahead of the 2020 election.

Katherine Stewart, who has studied the movement for more than ten years, argues that[4] Christian nationalism, rather than a religious creed, is an authoritarian political movement, “that actively generates or exploits cultural conflict in order to improve its grip on its target population,” and that the Republican party today is its host vehicle.

Christian nationalism is inseparable from the Council for National Policy (CNP), a network of think tanks, political organizations, media and other activist groups to advance corporate interests and theocratic goals – what Anne Nelson dubs a “pluto-theocracy.” Founded in 1981, specifically in opposition to feminist and other social movements of the 1960s and 70s, architects of the secretive group strategized their way out of a losing conservative movement. One solution was to tap into the evangelical vote. At the time, “only 55 percent of evangelicals were registered to vote, compared to a national average of 72 percent.”[5]

The 1973 Roe v Wade decision was not as controversial as it later came to be. Two years before the ruling, the head of the Southern Baptist Convention stated that “a child became an individual only after birth, when ‘it had a life separate from its mother.’” That same year, “Southern Baptists passed resolutions asking evangelicals to work for legal abortion.” When the ruling was issued, the Washington bureau chief for the Baptist Press declared that “Religious liberty, human equality, and justice are advanced by the Supreme Court decision.”

Stewart details in The Power Worshippers how abortion was identified and cultivated by CNP and Christian nationalist leaders as a key “culture wars” issue. Today they have developed a sophisticated strategy and infrastructure for training pastors as political activists, providing them data on voters in their congregations, and distributing millions of voter guides to churches around the country.

The movement, however, does not, cannot, rely on elections to implement its agenda. For years, they have been gaming the system through extreme gerrymandering of legislative districts, purging voter rolls, voter suppression laws, and exploiting disproportionate representation in the Senate. Unlike the House of Representatives, which is based on population, the Senate is comprised of two lawmakers from each state. By dominating in the less-populated rural states, Republicans have achieved disproportionate influence in the Senate. “Currently Democratic senators represent nearly 40 million more voters than Republican senators – but the Senate is split 50-50, with the vice-president, Kamala Harris, wielding the tie-breaking vote.”

Compromise is not possible with authoritarians intent on imposing their will through anti-democratic means. The appropriate response for US feminists at this political moment is assertion of rights without compromise and mass rebellion – which is why I support organizations such as Rise Up 4 Abortion Rights. Rise Up seeks to emulate our sisters south of the border, who generated a “green wave” to achieve decriminalization in Mexico, Columbia, and Argentina.

Rise Up’s call for “abortion on demand without apology” recalls the heady days of the Second wave of the women’s liberation movement in the US, when the radical feminist group, the Redstockings, refused advice to seek “compromise” and “reform.” The reform movement had advocated for decades for “exceptions” to abortion bans that would be “meted out” to deserving women without making any real progress. Whereas the Redstockings’ call for abortion on demand as a requirement for women’s liberation galvanized activists and created pressure on the Court that led to the Roe decision.

American women face a different set of challenges to asserting reproductive sovereignty than do women in Ireland or the UK. I warmly appreciate solidarity from our sisters there, but we need to plot our own course. I hope you’ll continue to stand by us, cheering us on.

[2] obgyn.uw.edu May 22, 2019. “A Vanishingly Small Number of Women Have Abortions in the Third Trimester.” University of Washington.

Woman’s Place UK is committed to campaigning for abortion rights. Our 2019 Manifesto calls for