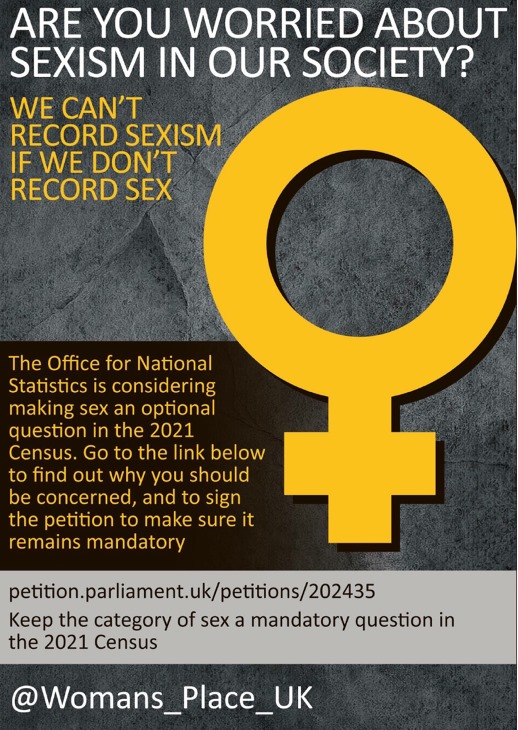 WPUK, Sex and the Census: a brief timeline of our campaigning work on the accurate collection of sex data

We first raised concerns about the impact of self-declaration of sex on data gathering at our launch in 2017. One of our initial five demands was for:

‘Government to consult on how self-declaration will impact upon data gathering – such as crime, employment, pay and health statistics – and monitoring of sex-based discrimination such as the gender pay gap.’

Our 2019 resolution on this subject states:

‘Sex matters. Rigorous collection and analysis of sex-based data and high-quality research must be central to the development of any services, policies or actions which address women’s needs or which challenge sex discrimination and inequality.’

In September 2017 the ONS recommended making the census sex question non-mandatory. In October 2017 we launched a petition opposing this.

The ONS appeared to notice, as, at the last minute, we were invited to attend Population and Public Policy Forum – Census 2021.  ONS presenters were at pains to assert that sex data would be collected.  We took this to be a commitment to mandatory, binary and accurate collection of sex data and tweeted positively about the meeting on this basis.

In February 2018 we confirmed our interest to ONS in talking to them about the England & Wales census…and waited….

In the meantime, in November 2018, we submitted evidence as part of the Stage 1 considerations of the Census (Amendment) (Scotland) Bill. In November 2018.

Correspondence with the ONS and Submission to the UK Statistics Authority

In February 2019, we wrote again to the ONS to reiterate our continued desire to be included in consultation about the census guidance… and waited…

In the meantime, in May 2019 we made a submission to the UK Statistics Authority’s Phase 1 assessment of the 2021 Censuses in the UK [Appendix 8]

Correspondence with the ONS and the Office for Statistics Regulation

On 3 June 2019, and again on 13 June 2019, we requested an update from Iain Bell regarding the guidance on the sex question. We received a response on 14 June 2019 with a copy of the draft guidance for the census.

We immediately wrote to Marie McGhee at the Office for Statistics Regulation outlining our urgent concerns regarding the draft guidance on the sex question in the 2021 Census.

Submission to the Public Accounts Committee

In July 2019 we made a submission to the PAC Inquiry into Challenges in using data across Government. In our submission we again raised our concerns about the draft guidance for the sex question in the 2021 Census.

2020 – WPUK launch Sex and the Census report with Oxford University; host a webinar; and challenge the EHRC

Sex and the Census Report

In October 2020, together with Oxford University we launched a report on Sex and the Census, as part of the project The Political Erasure of Sex.

Correspondence with  the National Statistician

On 20 October 2020, World Statistics Day, we wrote to the National Statistician restating our concerns about the proposed guidance to the sex question in the 2021 Census.  You can read this letter and the ensuing correspondence here on our website.

In December we commissioned a legal opinion. This concluded that the EHRC misrepresented the law in its submission to the Scottish Government. The EHRC had incorrectly stated that requesting, gathering and collating data on individuals’ biological sex could be in breach of the law.

You can read more about this legal opinion on our website; it was also reported in Scottish Legal News.

Correspondence with the Equality and Human Rights Commission

The Office for National Statistics levelled a similar line of argumentation regarding the collection of data on biological sex in the 2021 census. We therefore had concerns that they had received the same or similar advice from the EHRC.

On 7 December 2020 we wrote to Rebecca Hilsenrath, CEO of the EHRC, to request that the Commission withdraw the statement made to the Scottish Government, pending a review of its position. They declined.

You can view our full exchange with the EHRC on our website.

Sex and the Census mailout and call to action

In the first week of February 2021 we sent printed copies of the Sex and the Census Report to all MPs, MSPs, MS and MLAs; to Lords chairing relevant APPGs and who had expressed an interest in the subject; and to individuals at the Office for National Statistics at Drummond House. We called on supporters to lobby their MP, bring their attention to the report and ensure accurate collection of sex data in the 2021 census.

We are a grassroots campaign, run on the donations of supporters and with no office and no paid staff. We did our utmost to alert the ONS to the needs and views of citizens, especially women, for accurate sex data to be collected in the census; and our objection to the sex question being answered on the basis of gender identity.

Sex and the Census 2021 – Joint campaign

On 21 February we launched, with fourteen other campaigns, Sex in the Census 2021, a campaign to legally protest the census guidance.