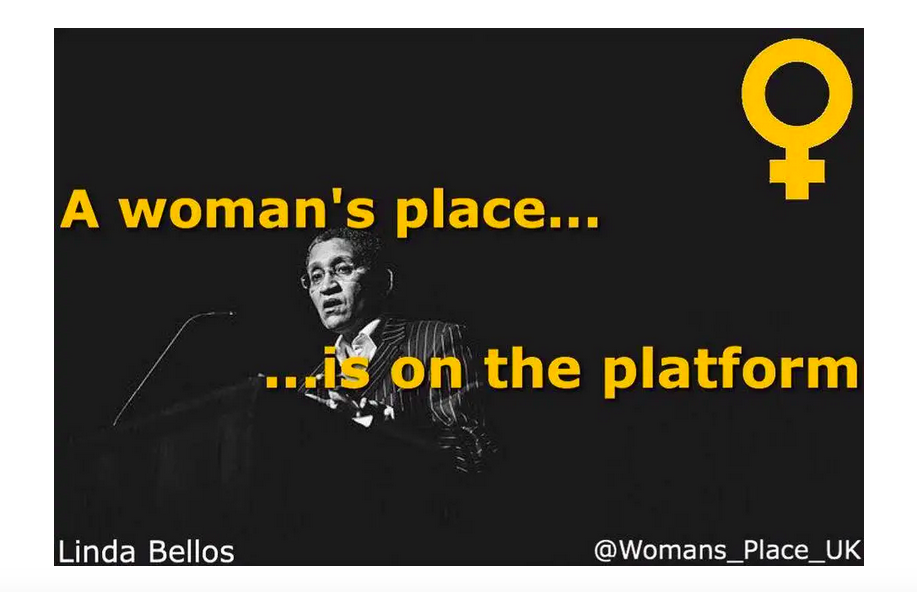 A Woman’s Place is on the platform was our first ever public meeting.

We have now organised a total of 28 public meetings, 10 webinars and a conference for 1,000 people at UCL.

Attempts to suppress these events have included physical intimidation, aggressive and abusive protests, pressure on venues to cancel, and a bomb threat.

There is a coordinated and concerted attempt to prevent women from exercising our legal and political rights which we are determined to defeat.

Even at this very first event, we had to overcome significant and sustained attempts to obstruct our organising:

…as soon as we made the tickets available, the attempt to shut down the meeting started in earnest. As the venue hadn’t been advertised it could not be put under pressure. Instead there was an organised campaign to book up all the tickets in order to quickly ‘sell out’ the event, and hence prevent those who genuinely wanted to hear our speakers from attending.”

…fake bookings were also made in the name of women without a public profile, using false email addresses. The evening before the meeting our event site received a message from a Facebook user hoping that ISIS would blow us up. It wasn’t a direct threat – we assumed this man wasn’t connected with ISIS – but it did confirm that some feel violence against women wishing to speak on gender is justified.

A woman’s place is on the platform

The impetus for this meeting came when Linda Bellos was ‘uninvited’ by a student society of a Cambridge college at which she had been due to speak.

We decided to invite her to speak in Cambridge and we were honoured when she agreed.

In the weeks leading up to the event, we heard of more women being shunned, intimidated, smeared and silenced for their views about gender and we asked them to speak too:

Helen Steel had been threatened at the Anarchist Bookfair;

Anne Ruzylo was subjected to an orchestrated campaign against her, prompting the entire executive committee of her Constituency Labour Party to resign in solidarity;

Just days before the meeting, Heather Brunskell-Evans was placed under investigation by the Women’s Equality Party. She came to the meeting and spoke without any notice at the event.

The meeting was a great success despite efforts to obstruct the event including vexatious bookings and complaints to the venue. You can read more about that here and here.

All three of the planned speakers were filmed and gave powerful speeches that moved and angered those present.

Linda Bellos spoke about her history in the movement as well as her preparedness to defend herself if attacked. She later successfully defended herself against legal action for comments she made at another meeting in York.

Helen Steel spoke movingly of the relentless abuse women are subjected to in our daily lives & how it restricts our freedom.

Anne Ruzylo spoke about her experiences of working in women’s prisons and the campaign to have her thrown out of the Labour Party.

A recurrent accusation that is made against us is that Anne Ruzylo made offensive and abusive comments about trans women at this meeting.

This accusation is entirely false as is clear from the film and in this statement.

Since that first meeting, we have held 27 more public meetings across the UK in a range of venues and places, ten webinars and a conference for 1,000 people at UCL The meetings are open to both men and women and respectful dialogue and debate are encouraged.

Speakers have included campaigners, women working in the women’s sector, academics, lawyers, journalists, sportswomen and trade unionists. Attempts to suppress these events have included physical intimidation, aggressive and abusive protests, pressure on venues to cancel, and a bomb threat.

You can read a record of all our meetings here.

Women have the right to self-organise

We have been astonished at the failure by civil, legal and political organisations to support this democratic right.

As we said in our submission to the UN International Covenant on Civil and Political Rights (ICCPR):

As a party state that has ratified ICCPR, the UK government has a duty to uphold Article 21 rights, including the right to meet, and the right to protest outside a meeting, but not in such a way that involves physical violence, intimidation or that prevents the meeting from taking place. By way of example of how the state has failed to act to ensure Article 21 rights are upheld, at a meeting in Brighton on 23 September, one of many held as fringe meetings around the Labour Party Conference, the police were observed standing by as a baying mob surrounded the building where the meeting was being held, shouting, beating and kicking the windows.”

Our most recent meeting on women in prisons was subject to an extremely aggressive and abusive protest which was organised by members of the Socialist Workers Party. The protest did not deter us. You can see films of the speakers here.

We would like to thank every single person who has supported our events by speaking, chairing, volunteering, donating or attending.

Together, despite authoritarian & anti-democratic attempts to silence us, we have asserted the right of women to freedom of expression and the right to self-organise.

We are currently planning our 29th public meeting.

Other articles about this meeting

A Woman’s Place is on the platform: an account of the difficulties organising the meeting by Judith Green

Are women born or made? The Economist